Right, so a few weeks ago I posted up my Valkyrie, finished to reasonable tabletop standard, although it still needs some kind of varnish/clear coat and possibly cam on the top. The main thing, in regards to this post anyway, is that I left the crew out until I had painted the cockpit. This is the first time I have done such a thing, as in painted before fully assembling something, but its got me thinking. Lots of blogs I read do paint before assembly, which makes a lot of sense to me, which is why I tried it but there seems to be a lot more to it than just paint and assemble. While it made painting the cockpit a lot easier, getting the pilots to fit was a right pain and required so remodeling. 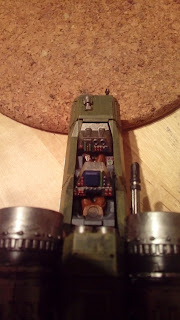 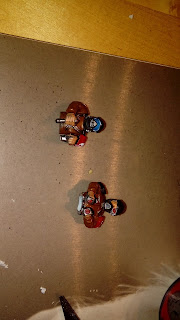 Both of these models didn't fit when I first tried to put them in the cockpit, before I painted I might add. The pilot wasn't to bad, its mote the throttle that's off, half floating above the consol. The co-pilot on the other hand was a pain. This could be down to the fact that I've lost the original body and so had to sub in a replacement, but the shoulders were to wide to fit in to the cockpit. They would have fitted under the edges if I'd have put them in during the build, but now they needed trimming. Lucky, its underneath and when painted it was next to impossible to see the trimming but it highlighted one of the problems, sometimes there's a reason for the build order! 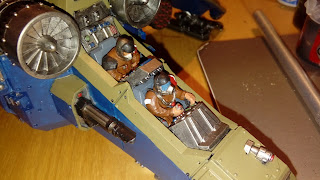 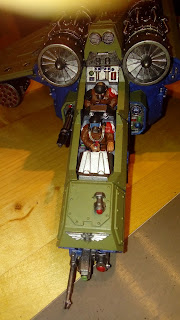 Now its all done, I think that there are a lot of advantages to pre painting but there are also drawbacks. If you want to do it properly takes a lot of time, dry fitting and double checking everything and sometimes, you may need to paint and assemble bits in stages, (assemble, paint, assemble a bit more, paint, assemble some more) which can be very time consuming, but ultimately does produce a superior finish.
Posted by Steve at 12:00:00