An impromptu game of kill team

This was an impromptu game of kill team that I played a few weeks back. A mate of mine was picking up his father from a party in town and had a few hours to kill, so he dropped by for a quick game of kill team. The teams were my guard horde list, featuring 16 guardsmen, including 4 with special weapons and a Sgt to lead them, facing off against a slightly less horde GSC team, including 2 aberrants and a number of neophytes.

I was worried by the aberrants and even more so after the free movement (cult ambush?), a number of them got before the first turn. I can't remember if we did the scout phase or not now but I have the feeling that we might have either gone for the same counter or cancelled each other out, meaning that the phase was pretty much useless for both of us. 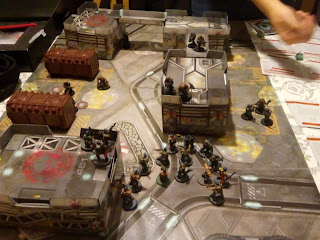 Mid turn one and the GSC are almost upon us already! 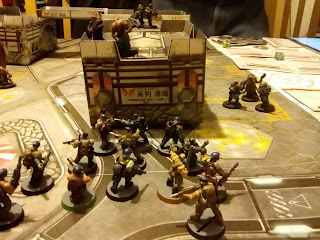 A close up of the above shot. You can see one of the aberrants on top of the building directly in front of my little castle. My opponent had chosen not to charge this turn as he was a long way out, about 10 inches I think, so closed the gap ready for next turn. 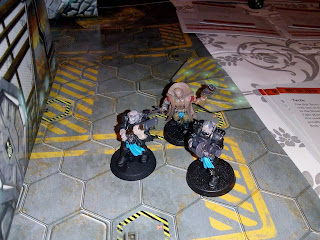 Coming in on the flank, the leader and his 2 bodyguards. 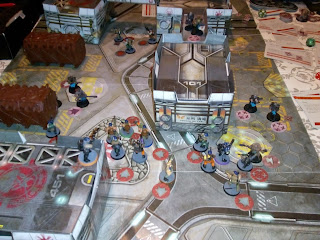 Turn 2 and the aberrant in the centre is no more, melted by the super charged plasma goodness of my gunner. With Comms +1, and orders, the weapon reduced the model to molten slag, although I probably wouldn't have super charged the weapon if I'd have know about the special rule that drops the damage by 1. Same result, less chance of cooking myself. 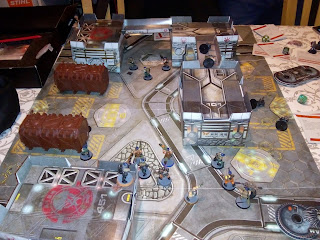 This was in to turn 3 and I was starting to dominate now. My extra numbers were starting to tell and I was pushing models up. I forgot to say, we were playing the mission where you have to get models off the board and even though I had not manage it yet, I had 3 in good positions to go for it and I had successfully stopped his first wave from trying. The three models under the bridge in the top centre of the board are actually mine, making a break for the back lines. My main threat at this point as I have eliminated both aberrants, are the three models hiding behind the lower crate, you can just see the base of one sticking out. 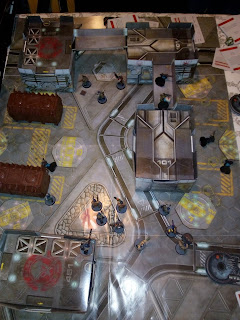 End of turn 3 and we called it here. In the picture above, the models lying down were shaken and so weren't a threat to me and so I concentrated on the other models, the ones behind the crate and the ones hiding under the bridge on the right, eliminating all of them. we then skipped forward to the moral phase and this resulted in the GSC team breaking and at this point there was no way back for them, with all there models either removed or shaken again. I on the other hand still had the majority of my team alive and kicking, with 13 of the 16 still on the board, although many had flesh wounds on them.


I don't think that this was quite the overwhelming victory it looks like but eliminating the aberrants early in the game helped a lot, taking out his most valuable models and the ones that could have done some serious damage had they got in to combat. Another really enjoyable game of kill team and another success for the Guard. So far the guard are proving them selves a lot better at this game than the death watch and as you'll see from the next post, this continues, in a fashion anyway.

So today is just a quick hobby update, just to show what I've been up to and to keep something on the blog! 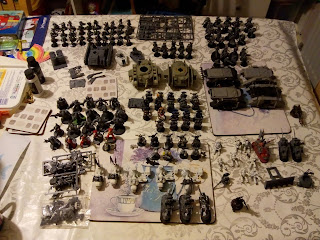 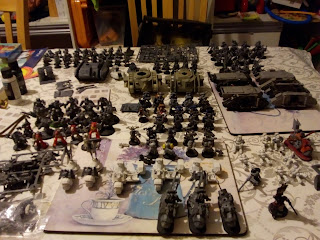 A closer shot of the grey horde

So, the other half was south with the kids at the in laws, having an early Christmas, as we won't be able to travel down over the actual festive period. I was unable to go due to work but it also gave me an  opportunity to get some DIY done, in the form of stripping and sorting the play room. In the evenings I took the time to relax and cracked out the air brush to get some priming and basing done. I set myself quite an optimistic aim, one which I ultimately failed to achieve. The pictures above show most of the models that were ready to prime and base, although there are about two dozen guardsmen not shown, which were also on the list.

In the end I managed to get most of them done! From memory, I airbrushed;

These were done in a variety of Grey's and blacks, starting with a light grey for the  chaos forces and gradually adding more black as time went on until the deathwatch were sprayed up in all black. I did the airbrushing over 2 evenings and I'm pretty pleased with the results, especially as I haven't used my airbrush and compressor for quite a while. They worked as there supposed to, although I was suffering with clogging quite a bit, as there seems to be a few bits of dried paint in my black primer. While this was annoying, at least it wasn't the compressor or airbrush that was the problem.

While I managed to get a significant number of models primed, I did fail to get two leman Russ's and a whole bunch, about 40, scions painted. The main reason for this is that they were not being primed in grey\black. The LRBT's were being painted in green, having already been primed on a previous occasion. The scions were to receive a custom primer\base coat, using a combination of black primer and red paint. This meant that I needed to mix up the paint rather than just dump it in to the airbrush and I never quite got around to doing it. This does mean that next time I will just be able to concentrate on these models and get them sorted.

So all in all a successful period of hobby time. Now I just have to find the time to get the rest of the paint on them!