So, at the beginning of the month I got my email with my Warhammer+ £10 gift voucher and I thought, great, that's going in the bank for when the Guard codex comes out but alas, no, apparently you only have till the end of the month to spend it! I wasn't to happy about that last bit and thought that it was a bit of a dick move to pull but then again they might have said that bit all along and I just never paid attention to it. Anyway, it is what it is and so I had better get o. With spending it.

But what do I spend it on? My initial thought had been to keep hold of it until the new guard codex and model range was released but with the time limit placed on the use of the voucher this is now not possible. So what should I get? I don't want to spend a lot more than the voucher, as it's a trap really. You get a small voucher and end up spending a lot of money! So I was looking at items around the 10 pound mark, which there really isn't much, mostly just a few old characters. The first choice I made was an easy one and that was to restrict my options to Imperial units and more specifically those that can be used with the Imperial Guard. There's were a couple of jump out items on the website, Wyrdvane Psykers, Regimental advisors, Primaris Psykers, Servitors, Crusaders and Yarrick.

However, I discounted a couple of these options straight of as they wouldn't work. The Servitors are £12 for two models but they have to be fielded in units of 4, so I would have needed two packs, at 24 pound. Now, I do own a techpriest, so it would have worked fine and having 2 plasma cannons in a guard army would have been good but I feel that I would be buying the for the sake of buying something and I've not wanted Servitors previously. The second unit I discounted was the Crusaders. While these guys are in the codex now, I don't think that they will be soon, in addition they don't mesh with any units in the guard as they don't have any sort of bodyguard rules to protect guard characters.

Next up I looked at Wyrdvane Psykers. Initially these were my first choice but on closer inspection of the rules I have changed my mind. 3 Wyrdvanes Psykers is not enough to really do anything with, as you can really only do one power, Mental Fortitude and that's a bit pointless. To really have an effective unit you need at least six, if not nine models, way outside my £10 limit. I could also make some of these out of chaos cultists if I really wanted as well, which I have thought about quite a few times but I've never really felt the urge to.  Alongside the Wyrdvane Psykers, I also considered the Primaris Psyker but this was easily discounted as I already have 4 modelled up and don't really need anymore than that.

Next up I looked at the Regimental Advisors and I was pretty set on these, as I have always wanted the Master of Ordinance and Officer of the Fleet models. However, I've kitbashed my own models for both of these and actually have a spare MoO already, so getting more seemed a little pointless. The Astropath model might have been quite cool to have but much like the Wyrdvane Psykers, I have no need for it and it doesn't actually provide me with anything extra.

That left old man Yarrick. Now this is a model I'm really interested in and I've wanted for a while, however, these is something holding me back right now and that it Ghazghkull Thraka. Not it might seem strange that an Ork model is stopping me buying Yarrick but I wonder if they might redo the model as they have redone Ghaz and Ragnar, Ghaz's other nemesis.  So with these to models being redone, I wonder if Yarrick might get a reworking to match him in. If he does, I will want the new model, not the old one, so I'm holding off buying it till then. All of which leaves me back where I started, what do I buy?

After discounting all the models I though about buying, I looked around and found some other models that I though would be cool, including an inquisitor model, a couple of priest and even the old space marine Techmarine but I would only be buying these models for the sake of buying something.

So I game it a few days and went back and started my search from scratch, just looking though everything for every faction and then it hit me! Why I didn't think about it before is beyond me but I didn't! So earlier today, I placed my order for these beauties; 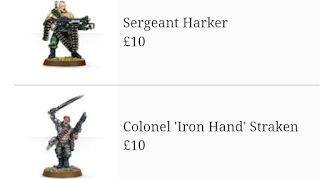 So, there it is, Harker and Straken in all their glory. Ok, I know what your thinking, what happened to the (approximately) £10 limit. Well, I got Sly Marbo for Christmas (or birthday???) and thought why not get these two.and have all three models! With the voucher it's half price with free postage, after all there are very few times you'll be able to get GW stuff at 50% off, direct from GW themselves! So, hopefully they will arrive soon and then I can get on with painting all three of them together. I will then either put them on display somewhere, maybe even get a little scenic base going or I will put them in a rather fun list I have thought of, consisting of the three characters and 60 conscripts, either in 2 or 3 squads, all for 495 points. It will be a silly list but over 60 bodies at 500 points could be rather fun! (For me anyway, maybe not so much for my opponent) Anyway, hopefully they will turn up soon and I can show them off.

So it's been a quiet week on the hobby front this week, for a couple of reasons. The first being that I've been busy trying to get all the house work and stuff sorted before the kids break up for the holidays. The second one is that I have had a bit of an eye injury this week, nothing serious but it has meant painting has been off the table.

The kids have the next 2 and a half weeks off school, which with the wetland windy autumn weather we get up here should be fun, I've got a few bits and pieces ready to occupy them but to say I'm not looking forward to it is an understatement.

On the eye injury front, well, it all started with a trailer, a horse trailer to be exact. With the proposed changes to towing regulations hopefully happening soon, we have invested in a horse box trailer for towing our two horses around but seeing as it could be a couple of months before we can actually tow the dam thing we decided to fit to cover over it to protect it. The previous owner had mostly used this to cover the hay in her barn rather than the trailer, as it two was parked in said barn. Well, at some point in fitting the cover, some hay or straw must have gone in my eye and it was not a pleasant experience. My eye was very sore and it swelled up like a balloon. It's been several days now and it still isn't quite right but significantly better than it was!

Anyway, I had been hoping to have the Brazen Hawks finished by now but as it stands, the Capt. And Lt. Are finished, alongside the five Hellblasters, with just the bases to finish. The five heavy intercessors are based but need all the details filled in. Hopefully I'll get that sorted this week ready to post next Friday, provided the kids aren't to late to bed that is!

After I finish these guys it's going to be on the the Stone Dragons but that might be a few weeks away before any of that gets finished!

So that the little weekly update this week, just the keep the blog ticking over, hopefully I'll have something more to post up next week!