Last week I looked back through my resolutions from last year and commented on how badly I did with them. Well, this is a new year and a new list is requited and when I say new list, what I mean is last year's list with a couple of changes. These are not in any sort of order, so I will highlight the ones that are more important than others.

This has been on the list for a year at least and I really want to get these done, however I think that these will take a while as they are quite detailed and I want to do them justice and really make the most of them. Maybe they will get done towards the end of the year.

Having played a couple of small, combat patrol games with my son and his new necrons, this is definitely a priority for me. I think I will be cheating and buying some silver spray for doing some of the parts and just slapping on a few highlights and the building will be getting a coat of gray primer and then a texture coat to finish and job done. Again, with lockdown and the kids this won't be as simple as it sounds.

Kill teams in general are sort of on the back burner for the moment but not forgotten at all. I still have a plan for these guys and I intend to carry it out but it maybe towards the end of the year before they see the paint table.

Again, low on the list of priorities but they are simple to paint and I have some done already, so if infancy a change of pace at all, these maybe the go to models.

5) prime and one colour base coat primaries marines

This will be the next project on the paint table after my current one. I don't intend on getting these fully painted, just primed and single colour based, so that I can define who forms what chapter and squad. This will mean that I could use them in games without getting to confused as to who was who.

On the paint table as we speak and progressing well. They are all primed, based and have their squad marking on, now they just need the rest of them painting up! This is quite a simple scheme so, in theory, shouldn't take too long to do. Hopefully, If I keep going at the speed I'm going, this project will be finished by the end of Feb!

This is also something I'm keep to do this year and will mean that I will finish all my current guard armies. These are only a few troops and it's mostly vehicles, so I really don't know how long it will take to paint up.

This is something I'm keen to do even though it's a kill team as these guys are really my son's models. The scheme is simple and I'm not aiming for much detail on them, just basic colours, so he's not playing with grey plastic models.

So with the new toys for Christmas, there are new items on the list, in this case, necrons. These will also be a simple paint job, black primer, grey/silver dry brush and then highlights in various colours depending upon units and rank.

So that's it, not to long a list but we'll see how it goes. I do have plans to add a few more bits, namely more Eisenkern Panzerjagers and some death fields cannon fodder models, both from wargames atlantic. I may also add some transport to the Dagr Ormr but that will depend on what happens with the new Guard Codex when it gets here.

Email ThisBlogThis!Share to TwitterShare to FacebookShare to Pinterest
Labels: Resolutions

So Christmas has been and gone for another year and its been a slow start to the new year for me. I've a few posts in the pipe line but with the new lockdown here and three kids to keep  entertained while the wife works from home, time to blog is at a minimum. This is mostly because the oldest keeps nicking of with the phone to listen audio books and the youngest wants to watch YouTube eveytime I get the phone out my pocket.  Anyeay, While I may not have received much in the way of 40k goodies this year for christmas, I did receive what I wanted.

This year, I plan on clearing the backlog of unpainted models, so I didn't want a ton of new models to add to the pile. So the wish list was short, just one of the new starter sets, which my son would be getting the other one and we would split the models, him the Necrons and me the Marines. The only other item is the last of the POP minitures, the Ultramarines one. That completes the quartet of models.

With the addition of these models to Dark Imperium and Shadowspear, I now have pretty much all the models I need to build the five 500 point armies. There are a few models that I would like to add to a couple of armies and I may add them later, specifically to the imperial fists force but I will have to look at that later and see if I want to. 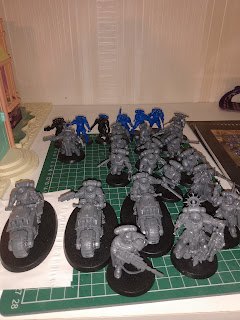 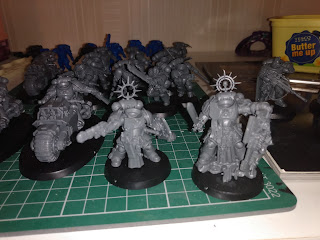 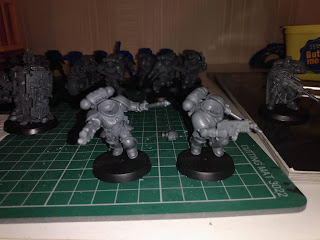 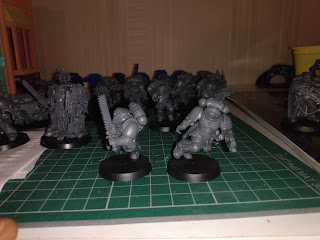 I've done some mild kit bashing, changing around arms and and weapons, just to change the poses. The two picture above are the same model just with a change of arms, which gives them a very different look. Also they are all currently headless, well more or less. This is mainly as I plan of using non-primaris heads on a lot of these guys, mostly they will be first born heads, as for lore wise these will be upgraded first born marines or new in chapter created primaries and not Crawls versions. More will follow later but first I've a different project I'm working on!

So 2021 has started pretty much as 2020 ended, with most of us stuck inside for the foreseeable future, it's time to look back on 2020's hobby aims and resolutions. This time is went back over all the previous years and combined any outstanding hobby goals into a single list, with the aim of polishing off all the outstanding items. Needless to say I didn't anticipate what a year 2020 would become, nor did I anticipate several months of home schooling. This plus a toddler who's a complete night owl (like his father), my hobby time went from little to none!

Anyway I did manage a few bits here and there, so I did manage to Rick one or two boxes! Let's see how badly I did;

Nope. First item on the list and I haven't touched them at all. I haven't even primed the 5 vanguard vets I built.

This was supposed to be a side project, to be done while the wee one slept. However, when the wee one slept, I've been dealing with the big two. Therefore only two small bits got painted, but not based! Maybe next year?

Again, nothing got done with these guys. The plan still stands, I just haven't go started with it yet.

Now this one went a little better than the rest;

Cleaned, primed and 3 models completed. The rest should be easy to do, as the scheme is simple and there's not a huge amount of details on the models.

Half way through the list and we've finally got a completed item! Yes, I cheated by using some pre-painted models but it's done!

Two in a row now, we're on a roll! Yep, the team is painted and done. Another Pat on the back for me!

Would you believe it but we're up to three! That's right, another item ticked off the list. This team is all painted and ready as well.

And there goes that roll, crashing to a stop just as we were getting going. Calgar is still in raw grey plastic, although he is in a shiny new KR foam tray! He's also been joined by a number of new primaris brothers but more on that in anothet post.

These are currently on the paint table ready and raring to go. I just have to remix the paint and hope that it's not to far off the original colour. Also, I airbrushed the first lot but will be painting this second batch, so we'll have to see how that changes things as well.

7) get as much of the Hrossey Yeomanry primed and base coated as possible.

These haven't been touched either but they will be up next after the Dagr Ormr MT force.

So maybe not as successful as I would have liked but I also have a number of other boxes ticked that aren't on this list, for most amongst this list is the completion on the Hjaltland LI. All the extra models have been painted and sorted. Also, I have built and painted a test model for my tyranids kill team. I have also purchased and build the Marines from Shadowspear, Dark Imperium and the recruit and elite started packs.