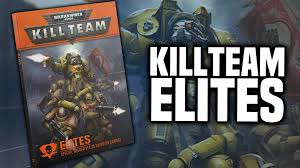 Right, I promise that this will be the final part! Today we're going to look over the new AdMech and Chaos units and then we'll can this one done!

Starting with the AdMech units. Now there are only two units, the Electro-priests. The Corpuscarii priests are useful for both shooting and combat but the Fulgurite priests are solely combat focused. With the other options available I don't know if these are really worth taking over the sicarian variants. Yes there slightly cheaper and have a slightly better invulnerable save but they are weaker with less wounds. While there are some good rules for the units, such as Voltagheist field that both units have and Siphoned Vigour that the Electro Priests have. These rules are useful but don't in my opinion make up for the lacking in profiles. I don't have either and I've no plans to buy either so it really makes no difference to me, however, from the bits I've read, I'd take the Sicarian's, probably the infiltrator version for some shooting.

Next up, are the Chaos units. Again I'm not going to include any of the newer units, which is quite easy, as they are all commanders and the possessed units are not really a new unit, just a new model.

Anyway, we'll start with the Khorne Berserkers. These are for all intensive purposes regular marines, just with an extra attack. They have standard rules, Death to the False Emperor giving the ability to gain extra hits and Transhuman Physiology, ignoring the first flesh wound. However, the most interesting rule is Blood for the Blood Good, allowing the model to fight twice. This would be even more effective is they could take some other options for wargear. However, it's very limited with only the champion being able to take anything more powerful than a chain swordaxe. I still think this is a good unit and against weaker units it could carve a bloody path.

The next up are the possessed. Now, if you think the options for Berserkers was limited then this is even better! There are literally no options at all. Now I het that they are supposed to be possessed by daemons and all that but you could at least give them a couple of weapon options. Anyway, they get the standard death to the False Emperor and Transhuman Physiology, as well as a 5++ daemon save, all of which are very useful. They also get an additional rule whereby you role a D3 every fight phase to determine the number of attacks the model has. Now this could be very good (3) or very bad (1) and leaves you at the mercy of the dice gods every turn. Yes, the weapon profile is pretty reasonable but if you can't actually hit the target it's a bit useless. I'd have preferred a straight 2 attacks rather than D3, just for the certainty but the units is still quite a good unit nonetheless. I may have to think about building one or two at some point, just not anytime soon.

The last unit to look at in this whole review is the Chaos Terminator. Now this unit has the standard stat line, same as 40k proper, and the same points cost I believe. So while this is not a cheap unit, it is a versatile unit with the ability to take both Combi weapons and power weapons. The means that you are not stuck with bolters and power Fists when facing guardsmen or Tau, wasting the cost and potential of the weapons. Taking a Terminator with Combi flamer and something like lightning clawing will do just as well. One advantage that this unit has over the similar loyalist units, is the choice of support. Loyalist Marines have to deal with 10 point scouts as the cheapest support units. Meaning that even with 1 Terminator in the team, you are only looking at 6 bodies on the table. With CSM, you have 4 point scouts, meaning you could have 15 or even more bodies on the table, meaning you'd have lots of support and ground coverage. I still think these are too expensive for most games though maybe throw one or two in your roster for good measure, but on the whole I'd probably take a Berserker or possessed.

So that's it the finish of my little review, which has taken so long we've had an FAQ for kill team come out. I will take a look at this FAQ at some point soon, although there really haven't been many changes.
Posted by Steve at 12:00:00 No comments: