Hobby progress (or lack of)

So, I thought that I had better post something up here, mostly just to have something posted but also to give an update as to where things hobby wise are currently at.

It has been had to get much done recently with the youngest member of the family taking up a lot of time and effort. The fact that he has also decided that midnight is an appropriate time to sleep also hasn't helped! As my hobby time has mostly been done after the kids go to bed, trying to paint after midnight doesn't work very well, especially when the older two insist on getting up at 6am. So as a result I haven't actually picked up a paint brush since February. I am quite keen to get some more painting done but, despite my best efforts, I'm still working the weekend night shift and I'm trying to rebuild the utility room (currently re-plastering).

That being said, I have managed to get a couple of games in against my son recently and while they may not be proper games of kill team, it does still involve pushing little men around a board, so thats good. 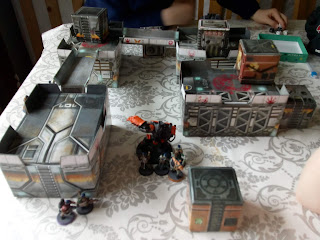 Yes it is Kill Team and yes, that is a Hellbrute.

I've also got a night of gaming planned up at a mates house, so that should be good and provide me with a
couple of full on kill team games. Hopefully I'll have some pictures to post up here later this week or next week.

In other areas, I have been working on my kill team backgrounds and personalities, plus a recent purchase of some extra space marine scouts has lead to a rethink on one of the teams. With the imminent arrival of the Elites supplement this scout based team may well be joined by a veteran\tactical  based team  but we shall have to see on that. I had been planning on holding off on posting the backgrounds and detail of each team until I had finished painting them, however, with the lack of content I think I might post them up anyway, otherwise you'll probably never get to see them!
Posted by Steve at 00:00:00 2 comments: