Well, if you haven't guessed, this is another filler post, and as such is continuing with the series of pictures. So here are some pictures of the 56th Dagr Ormr. These guys are made from Dreamforge Eisenkern Stormtroopers. Personally I like them a lot better then the GW Scions, as they have a lot tougher look to them, even if there a little skinnier, and almost have a mini marine look about them, which I think they should have, seeing as they are the best the IG can offer.

Vox caster on the left, with two Scions in the centre and a HS Volley gunner on the right. The HS Lasguns are modified Lasguns with scopes from Anvil Industries Sniper Scopes. The HS Volley gun is a homemade conversion using a flamer as the basis for the weapon.

Here is a view of the back packs with squad markings, the blue shows up a lot better on the table top.

This shows off the special weapons some more. The HS volley gun is in the middle, a simple design that is supposed to be similar to the standard HS gun. The melta gunner and plasma gunner are GW Scions with the Dreamforge heads. I don't like these guys as much as I think that there armour is to ornate and fiddly. I cut off the armour flaps at the waists and I think this helps them look cleaner but does leave the thighs a bit bare.

The next stage in the plan is to buy some Eisenkern Panzerjagers, or female storm troopers and also the command squad when it is released to form a full unit of MTs, add to this some APCs, possibly the new one from Anvil Industry, the Unity Council APC, provided it is of similer size to GWs Taurox, and vola, the MT Ground Assault Formation. Well, that the plan anyway.
Posted by Steve at 12:00:00 No comments:

Here is this weeks post, unfortunately due to rubbish internet and house moves I haven't had a chance to look at the new SM codex and its implications for the Emperors Disciples, hopefully I will have a chance over the next week to post something. So instead you'll have to put up with some pictures instead.

Following on from the recent old army picture, I have put together a few pictures of my Hjaltland L.I. forces.

A few of the sergeants, showing off there squad markings. The ones on the right have had there bases prepped ready for flocking, after I've Quickshaded them that is. 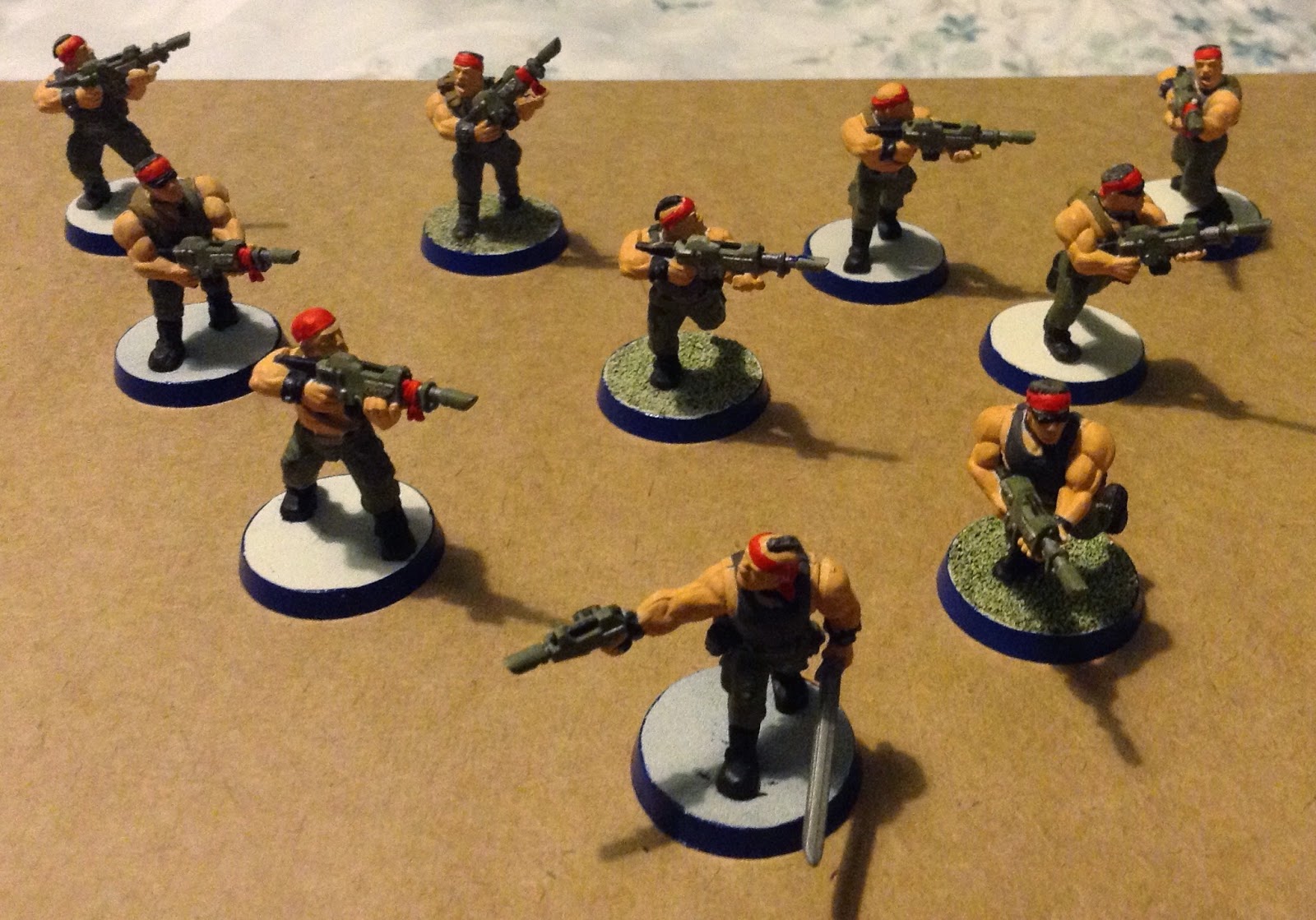 Above and below are shots of one of the squads, I didn't realise until after that there should be a melta gunner in there, instead I'd put out 9 riflemen, not sure which ones the interloper though. 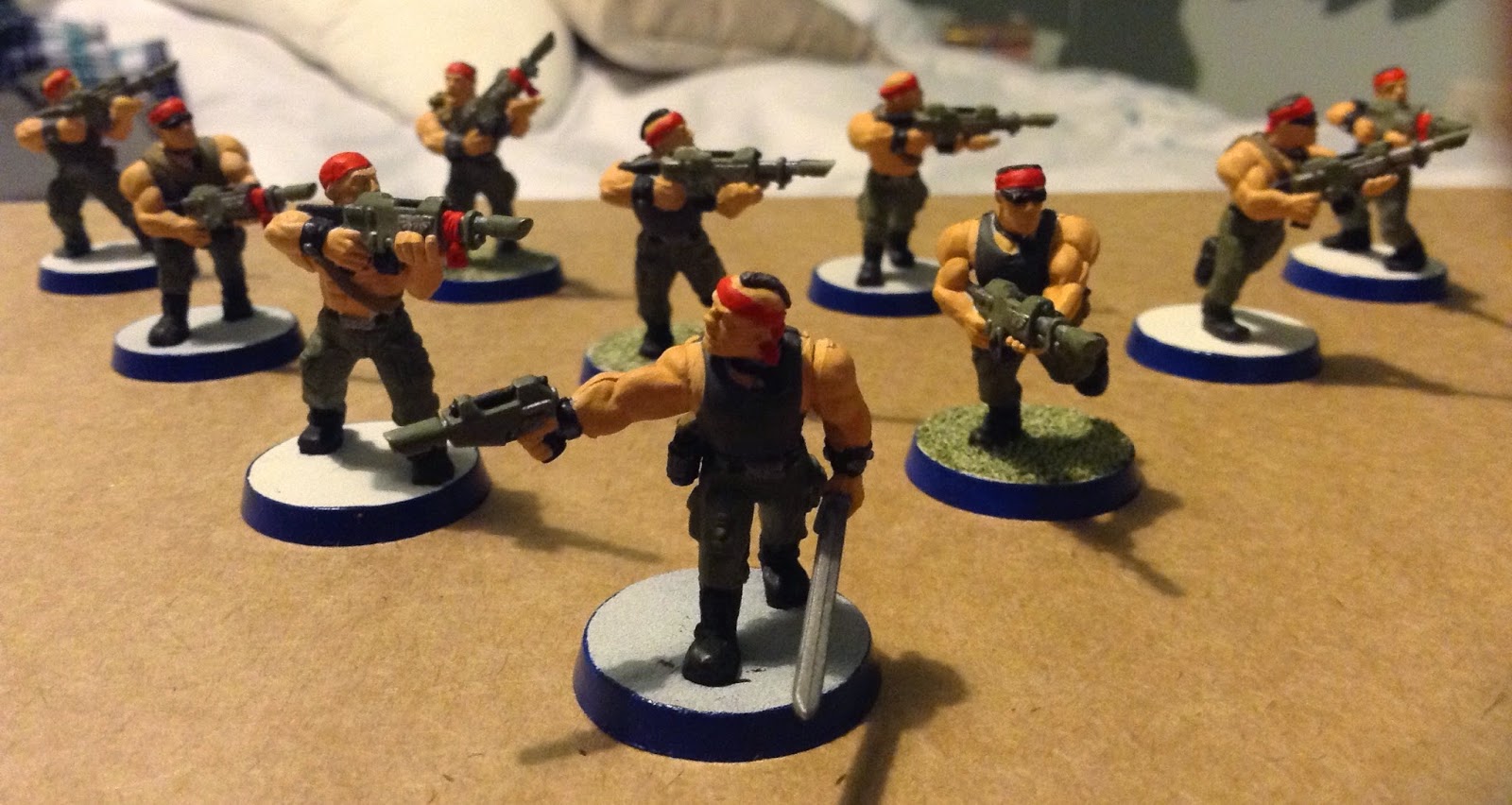 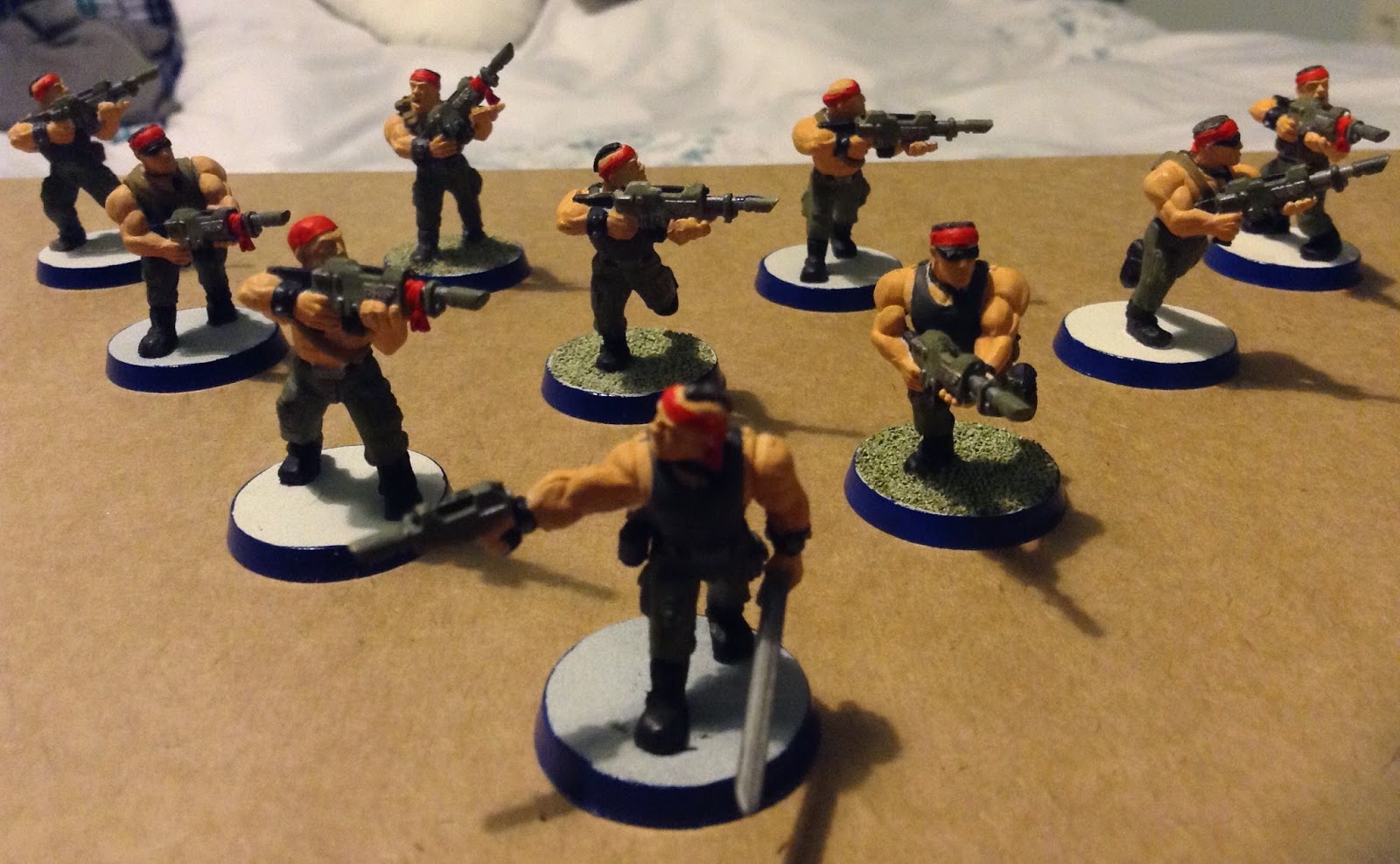 My Non FoC HQ units. Some may recognize the units from the DV box set. The Psykers on each end have been modified with DA bits with the force weapons and a shield on the right arms, both of which are only just visible. The CC Priest has also been modified with DA bits, visible with the chain hanging off his waist plus more on his back that you can't see. The Autogun wielding Priest is pretty much as is.

The commanders. On the left is actually the Dagr Ormr commander, but the other two are platoon commanders from the Hjaltland L.I. The centre one is from the command squad box but the other one, and his identical twin, are 2nd edition Lieutenants.

I'll see if I can get a few more pictures us here at some point of the other units and characters. Hopefully they will be better pictures, as these were taken with the Ipad and not my DSLR.
Posted by Steve at 20:21:00 No comments:

Well, the new codex is almost here, and there are leaks abound, que the Nerd Rage! Er, no not really, in general I like the way 40k is going right now, and the way the new codices are done, apart from Eldar, but then no body but Eldar players like the way Eldar are! As for the new SM codex, I'm more interested in the new detachment and whether it will be better or worse than the CAD setup I currently use for my Emperors Disciples, and this got me thinking about the chapters and the DA codex rumoured to be next. I have tallied a bit about this when the new BA codex came out, but Ive been thinking about it recently again.

So what have I been thinking, well, GW is doing a good job so far and, if the SM codex stays similar to the last one, the chapter tactics were pretty much all good, although I would make some minor changes;

White Scars - cheaper bikes or more options for bikes, in terms of mounted weapons and also bikes as troops. All bikes come with TL bolsters, but why can't some have Flamers or melta, and trying not to step on the DA Ravenwings toes, plasma or grenade launchers. The White Scars are a bike crazy lot, I can't imagine that they haven't played around with their weapon loadout.

Salamanders - well, we all know what's going to be said, cheaper flamers and meltas. Also more access to heavy flamers and hand flamers, as well as infernus pistols.

Raven Guard - these are slightly odd ones, I do think that they should have greater stealth/shrouded rules to match the fluff and maybe cheaper assault marines.

Then there are the poster boys, the Ultramarines, these guys are the general jack of all trades and masters of none, the chapter tactics they have reflect this and seem about right.

As for the other chapters, well, the wolves I think are just fine, their plodding along on their own quite happily, so just leave them to it. BA and DA on the other hand I think need some work.

BA need to go further from codex standard, with the Red Thurst becoming more pronounced and assault and combat becoming their forte. This may mean assault marines being troops again or even just being able to arm up Tac marines with CC weapons in addition to bolter and pistol. All the vehicles having fast or access to being fast is also right in my view. BA should become the up lose and personal brutal killers of the SM world, where DA should become the the dark moody teenagers.

By that I mean, they should become darker and more grim, focusing more on the hunt for the fallen and less on the imperium, their motives and aims all but I unfathomable. There should be greater emphasis on the Dearhwing and Ravenwings, with greater options and weapon choices, with a distinct plasma flavour. After all the DA are supposed to be masters of plasma tech, well, within the imperium anyway.

All this will give most of the main chapters some extra uniqueness, moving the current chapter tactics further along. One additional chapter, a second founding chapter that I think needs some attention as well is the Black Templars, these boys are ripe for flavour, they have plenty already, but I think it can be taken further and I definatly think they deserve their own codex. As to what should happen, I'm not sure, but with all the different units they have, something could easily be done.

Well, that's my thoughts, the only other thing I have to say is Grav Deva with amps!!! What! Grav-cannons, fine, but amps! If there that light why don't Centurions have two, one on each arm? You don't see a marine caring two las cannons do you! And, oh dear, assault marines still need some love, more options would be nice. Personally I'd love bolters, imagine that, a squad of marines jumping around, boltering stuff to death.

Well, here my fingers crossed for a good SM and DA codex!

Well, it's been a busy week here with packing the house for moving, as such, there has been limited time to blog. Also, with the imminent release of the new Codex: Space Marine, there maybe a few changes to my Emperors Disciples SM force, which I will talk about as and when I know. So in the meantime here are some pictures of some of my marines. I'll apologise that some of these photos have been on the site before, I'll try and get some new ones up after the move.

First up are my Vanguard Veteran squad with jump packs. Again, most of the figures are DV Chaos ones, with a BA DC model thrown in for some loyal blood. I've removed most of the spikes and some of the iconography from the chaos models and I will be adding more details from the BA DC sprues and also the DA upgrade sprue. You can't see very well but there is a power maul, two sets of lighting claws, a power axe and a power sword in there, a bit of a mixed bag but pretty much able to deal with most threats up to Ap3.

This is my Sgt, with extra iconography. Again, he still has some work to be done, but I think he looks suitably mean for the job. 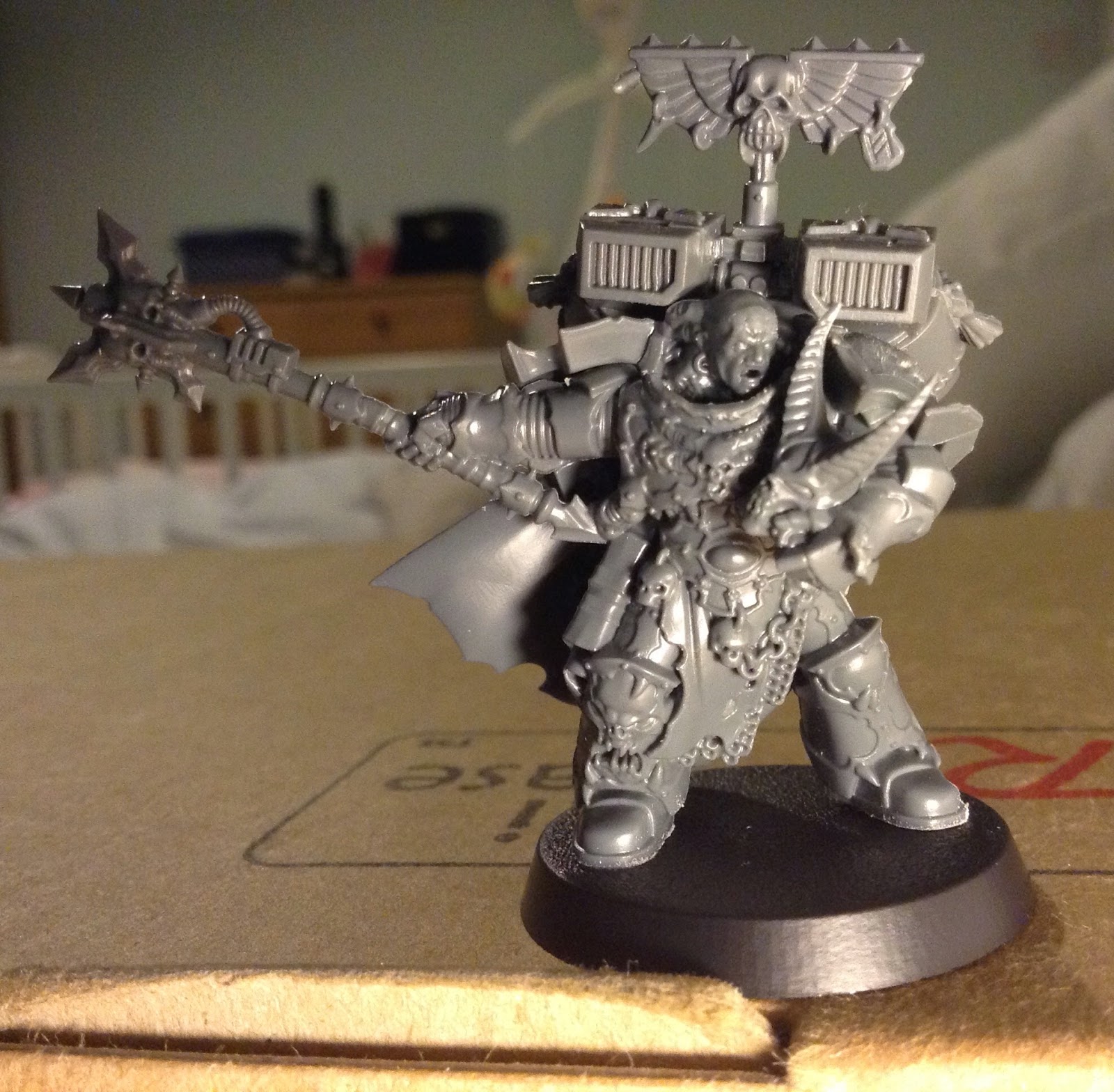 These guys are my Sternguard Vets, there are another 3 more that weren't pictured, including one with a power fist. They are a mix of old metal upgrades and plastic, which is why they have been earmarked as vets. There are plenty of chaos bits in there, apart from the metal up grades that is, most notably are the back packs. 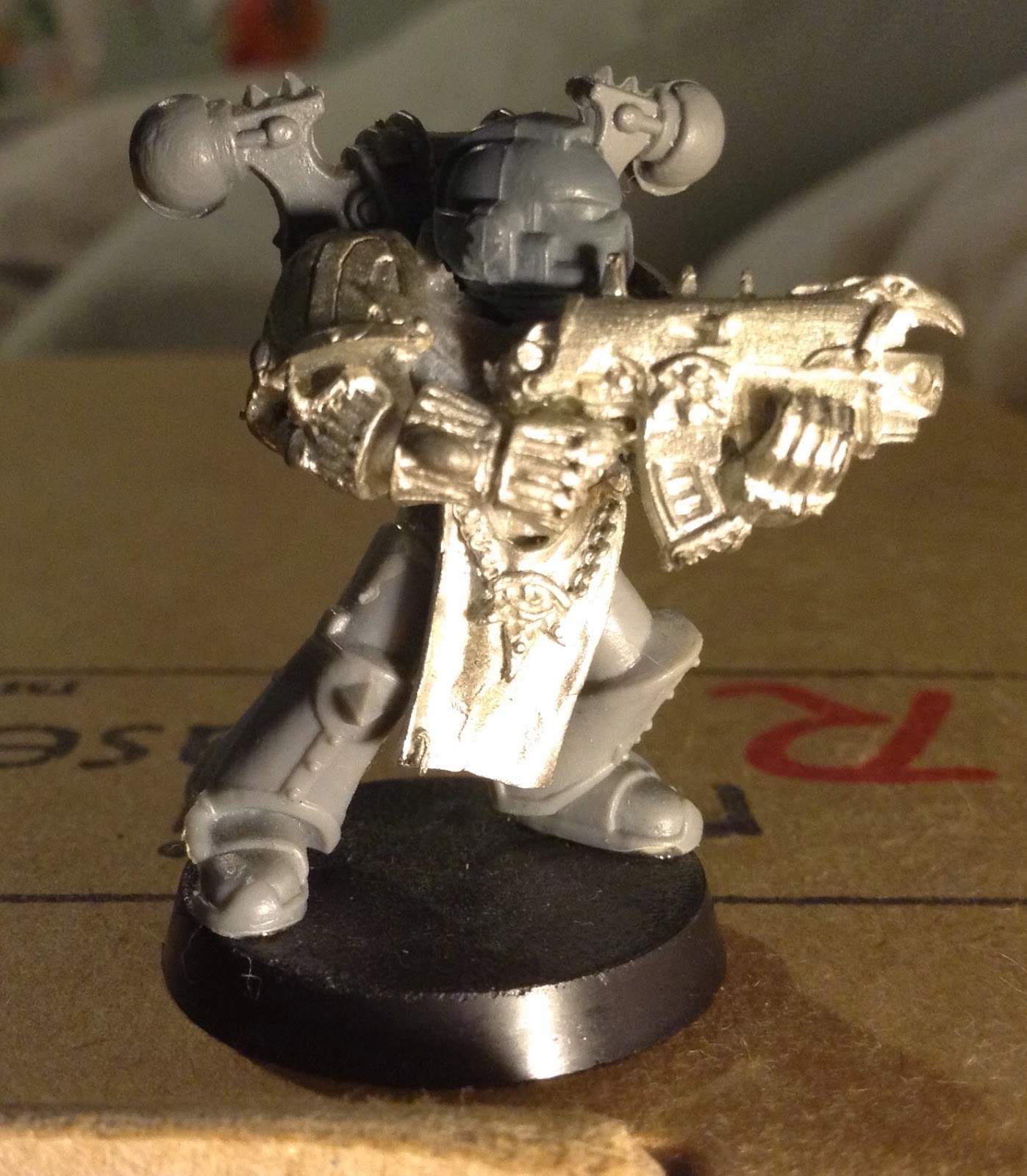 A close up of one of the marines to show off the white metal up grades. The chaos symbols will be left, as I don't want to damage the metal parts as they are old school and quite rare these days. 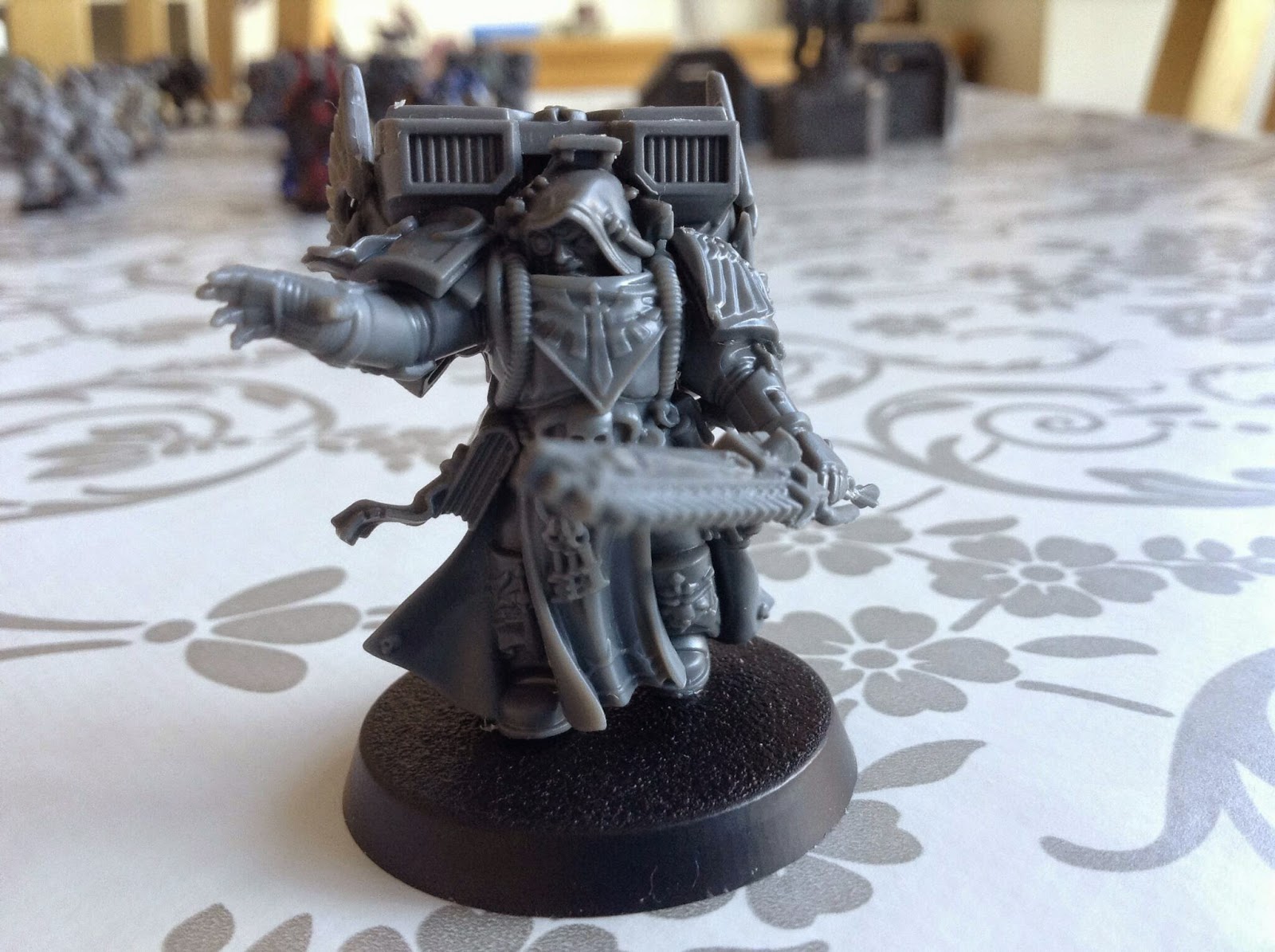 This is my Priest, (BA Sanguinary Priest), modelled with the Eagle Wings (BA Relics of Baal; The Angles Wings). He is a modified DV DA Librarian, with a BA DC chain sword and pad, with a one of the Vanguard Vet jump packs, placed on a 32mm base. I'm pretty happy with this model and once painted up in the appropriate colours it should look good.
﻿
Posted by Steve at 12:00:00 No comments: