I came across an old painting guide a few weeks ago and it got me thinking. The guide in question is a Citadel painting guide titled; Space Marine Painting Guide. Although I'm not sure of the exact vintage of the guide, but I believe (after a brief search) that its from 1989, which is a while before I got in to the game, being as I was 6 at the time!

So what caught my eye over the newer painting guides, which are definitely better in terms of painting effects and techniques. Well, mostly the schemes used, mostly those used to distinguish the various specialities, such as Chaplin, Techmarine and Librarian.

Chaplin, Librarian, Medic, Techmarine
The set up from way back when is very different from how it is today, with most marines showing none of the additions that many show today. Take for the example the pic above, the techmarine is not in red armour or with a thousand and one additions on his pack, he's just a marine with a spanner and a marking on his shoulder pad. The blood angle medic is similarly dressed, with no extras, the only one that could pass itself off on todays board is the Libby, mostly cos he's an Ultramarine. The difference is also visible for the Salamanders below, with the Chaplin only designated by his helmet and the vet showing standard markings, just with the colours reversed. The medics markings are more obvious with the Salamander then on the BA above due to the base colour of the model. 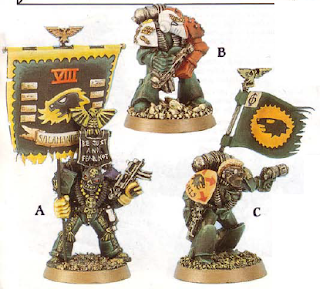 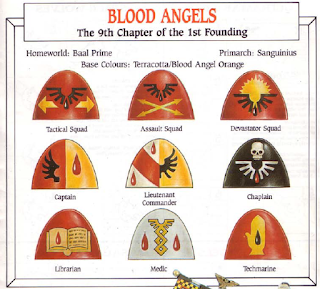 The Blood Angles guide
The Blood Angles guide doesn't show much difference from today, although some of the symbols are slightly different. So what's the point in this post? Well, I'm planning on adjusting my Eagle Knights paint schemes to replicate the old school schemes. This will affect many of the models, specifically the Priest and the Captain, but also some of the vets, notable the Vanguard and the Death Company, who will be painted in the Vets style rather than in the DC style. If I have any models left over I will be adding extra HQ units, in the form of a Libby and Chaplin, to give me options. While I'm not 100% sure how I'm going to carry this plan out yet, mostly as I have not started painting the models, nor have I actually finalised my chapter symbol yet, although it will feature a shield (Knights) and three diagonal slashes (as from an Eagles claw).
Obviously, the main colours are going to be orange and black, so that may make the Chaplin/priest a little difficult to distinguish, so I may have to adjust that a little. But the medic should be easy as should the captain. The vets will also be interesting, but I suspect that it will be a simple reversal of the shoulder pad/arm colours. So, its going to be a while before I get around to painting up the models, although most of the squads are now gathered together, individually bagged, ready for assembly and/or modification.

Well, here are the other WIP sheets I was on about, for the Dark Guardians, Emperors Disciples and Hrossey MechVets. I was going to post this last week but with the news of specialist games coming back, it got bumped to this weeks post. So with out further delay, here are the other wip lists;

First up the Dark Guardians, and as you can see, its kinda red all over! Even the yellow is a little optimistic as they don't actually have their back packs attached and their not glued, just pressed together. The rest are in bits in bags in the box of doom/bits.

The Emperors Disciples, are not much better, a little more yellow and lots of blue. The blue are mostly Ultramarines at this point, so definitely need stripping! The Sternguard are also a little bit of a cheat as they don't have combi's at all, this is because they are the old metal models mostly and I don't want to damage the old metal work. Again most of the bits are in the box along with the parts for the Dark Guardians. These guys, as with the ones above are not high on the priority list, so by the time I get around to them we could be several codices down the line and the army will have changed quite a bit and depending upon what happens with Specialist Games, they may find themselves relegated to allied detachment, with little more then a min troop choice and a 10 man Sternguard and a 5 man missile Dev squad. 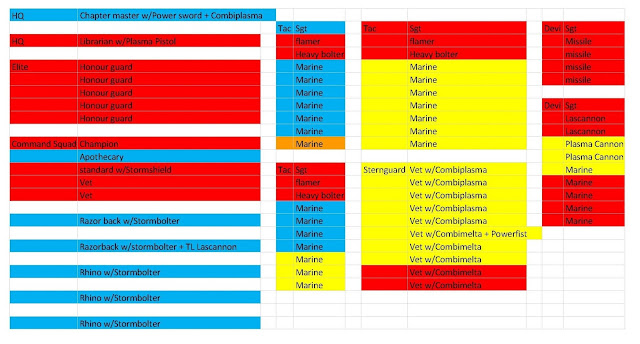 Lastly we have the Hrossey Mech vets. These boys are a little but more complete and are probably more complete than shown below as I have a number of models, quite a few of which are undercoated, sitting in the box that will form this army. However, I haven't dug down to the bottom of the box to confirm what's models are in what state so I've just done them in red for the moment. The only model missing at the moment is the 4th chimera, and all the compete models are ones that I haven't actually painted myself!

So, all in all, a lot of work to do and not really any time to do any! These will all get their time in the lime light at some point, but it could be a while.
Posted by Steve at 12:00:00 No comments:

Hold the Press!! Specialist games are back!

Wow, this is something I thought I would never see! And right now I am a little bit sceptical about all the noise being made, as we don't quite know the full extent of all of this. And this hot on the hills of the new Horus Heresy: Betrayal at Calth! (which I'll talk about in another post)

So, specialist games are back in business, well, kinda, it seems they are going to become part of Forge World, or Forge World are going to become part of them, something like that. I'm sure that by now all of you will have seen the poster that some GW Australia store manager put together to advertise all this. (it's here if not - thanks Nafka). There are also all of the facebook posts and B&C/Warseer threads dedicated to this, so it is happening, which is brilliant!

My one questions at the moment is what is actually going to be released? Apparently Blood Bowl is ready, which would make sense, with the release of the new video game and also as a Christmas release it will be huge, BFG is also in the works, and will be ready sooner, rather than later, but will either be renamed Battlefleet Heresy or maybe just set in the heresy era, not sure which, was a little confused by the various posts. Still, I'm on-board for that one!

Epic is another game that was named in the rumours, but there have been a few people saying that this is not going to happen as it will clash with 40k Armageddon. How, I'm not sure as the two games are pretty different, as not many people can afford a 40k Warlord Titan, but pretty much everyone will be able to afford a Epic one or 3. So I really do hope that Epic is re-released as I really want to get back in to both Epic and BFG, as I've mentioned in a few posts.

One other game that takes my fancy is Necromunda. A MPPK for the houses would be great, with a few magnets you could keep things fresh and keep the narrative going really easily. I would definatly love to have a house or two for playing with.

I really think GW are moving in the right direction with all of this, afterall, look at the success of Dropzone commander and the Dropfleet kickstarter, along with firestorm armada and planetfall. Also worth a mention are Mantics Dreadball and Deadzone, plus the new kid, Guildball, not sure who makes that one though. It also makes sense to release this before Christmas, gives everyone time to add something to their wishlists and builds the hype, I never understand why GW don't do more publicity, apart from the crappy teaser videos.

All this gives me an issue though, I am going to have to thin down my model count to make space and provide so cash to spend on all this goodness, so I think all those spares figures that were just going to go in the spare box are going to have to find new homes, along side a few other models. I might have to loose an army or two, or at least thin them down, namely the Emperors Disciples and the Elite guard. The former being shrunk to an allied contingent with Sternguard and the other loosing its guard elements and probably its Taurox and Tauros vehicles, at least for a while.

I'm currently waiting with baited breath to find out what is really happening and what will actually be released, but I am very very excited right now.
Posted by Steve at 12:00:00 No comments:

This post follows on from the previous one, where I talked a lot about a campaign idea. The original intent of the post wasn't to ponder campaign ideas, but the various fleets I would have in BFG but things kinda ran away from me.

So lets keep this post on track and launch straight in to the lists. I'll also talk about the Epic lists at the same time as they would also be tied in.

Emperors Disciples are a stand off and shoot army, as such the BFG fleet would contain large ships with lots of shooting power, such as several strike cruisers. While the Epic army would also be build to the fluff with lots of tactical and devastator units but few transports and dreads.

Eagle Knights BFG fleet would be formed of a cruiser and lots of smaller fast ships, designed around up-close and personal firepower, plus lots of transport capacity for launching boarding parties. The Epic army would contain lots of assault marines and vehicles, with the whole lot built around fast, mobile units as it the chapters preference.

The Dark Guardian BFG fleet would be formed of lots of smaller ships, with a mix of long and short range shooting with some assault. It would be very balanced in all areas, but formed of smaller craft, maybe with a strike cruiser but most likely just large escort ships at the centre. The Epic army would be full of Termies and bikes, of all types with few other units.

The imperial forces would be built in a similar fashion, with the Hjaltland LI BFG being formed of medium/small cruisers, fast and agile with good long range firepower and the epic army being mostly infantry with artillery support and lots of fliers.

The Hrossey MechInf BFG fleet would be a large battleship and cruisers, all with heavy long range firepower, and the Epic army would contain lots of vehicles including a few super heavy tanks.

As you can see, the nature of the forces reflects the fluff created in the 40k universe and carries it over to the various other systems, as it should be. This would mean that I would end up with a lot of models across they systems, 6 of each, and seeing as I cant even finish one army in 40k, I doubt that I will ever get around to getting all these armies started, let alone finished. I might try to get two of each, one marine and one guard, just so that I could. This would also rely on either FFG rereleasing both systems or finding someone that has both the other systems to play against, which is unlikely on both points!
Posted by Steve at 12:00:00 No comments: