With the final couple of touched added to the Eagle Knights Kill Team, it is time to move on to the next project, which also happens to be a Kill Team. This team is also a marine team, but dedicated more to longer\medium range fire power.

Initially I for planned for this to be a Space Wolf inspired team, using the Space Wolf chapter tactic. However, with the Eagle Knights team using the Blood Angles tactic and really having the option for taking the Space Wolves tactic without any penalty to the overall effectiveness of the team, as both are active in the fight phase, where the Knights are designed to be. Therefore, this team have ended up being designed for a lot more longer range fire power, with a number of storm bolters and bolters, with some support from a missile launcher and plasma gun. There is however some combat ability with several lightning claws and chainswords in the mix. This has given me a little issue though, as I don't know which chapter tactic I will be going with yet, but it will be either Imperial Fists, Salamanders or Raven Guard. 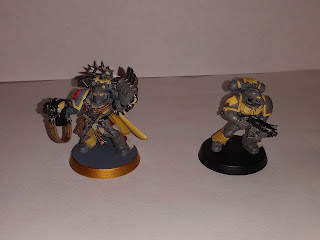 The two test models, more or less finished, although I'm not 100% happy with the finish on the leather items. 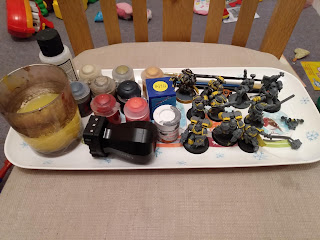 The paint table is currently an old tea tray which has enough room for my selected paints and brushes. 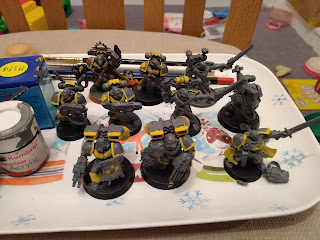 So, this is the full team, assembly for painting. Front rank is two jump pack vets for some fast assault along with a Sgt with storm bolter and sword. Middle rank is the two Tactical Gunners with plasma and missile launcher plus vet with plasma pistol and sword. At the back it's another Sgt with claw and storm bolter, a Tactical and Tactical Sgt, who double as Medic. They have been primed and based with the main areas of yellow blocked out all the units (the vet and missile Gunner have now been done) Next up is adding some details, such as black weapons and armour bits and silver highlights, oh and rebaseing all the models to the newly arrived 30mm bases.

Following on from the post last week, he is another update to my BA Kill Team. This one takes the form of a minor conversion, rather than a paint job. One of my two tactical Marines in the kill team has been designated as the units comms specialist and while I was digging through my bits box for some chainswords for a fellow club member, I came across my spare Scion bits, including the vox pack. This got me thinking about the Horus Heresy Master of Signals. 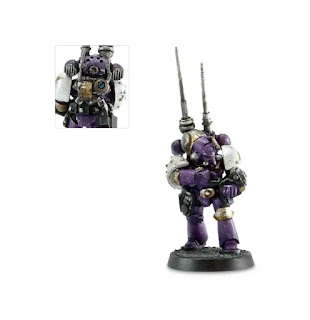 There are parts of thus model I like (the pack) and parts I don't (the weird head) but I've wanted something similar for a while, basically since I decided to do a Marines kill team. As the Eagle Knights will be my main marine kill team, I decided that it had to be the comms specialist from that team that got the treatment, although the at this stage I had no idea what said treatment would actually be. It was only on finding the Scion vox pack that I realised I could actually achieve what I wanted, as all the catachan vox packs were no good for what I wanted (despite the fact I have loads of them!)

The model chosen for the overhaul was Brother Rafael Amuto, on the right below. Mostly has it looks like he's holding up some sort of devise to his ear (yes I know he has a helmet on!) which was a knife at one point but has long since been lost. 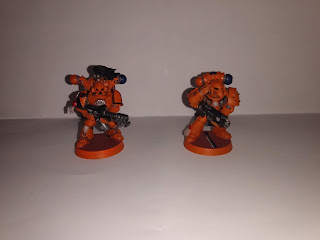 Brother Rafael Amuto on the right

The idea was simple, cut and splice together a marine pack and Scion vox pack to form a signals pack. It didn't work out quite as easy as that. Cutting down the vox pack and adding on the bottom of a marine power pack was pretty straight forward. The vents were a little more challenging however. At first I thought about just going with one, on the list, as the right has the speaker unit but it just looked unbalanced. So I went with the classic two, but getting them to sit evenly and look right was challenging. For the right one to sit properly on the pack, even with some modifications, meant the left one looked low and having the left one at the correct heigh mean there wasn't space for the the right vent. In the end I had to do some extra snipping and compromise, so the left is slightly higher than the right but not noticably so. 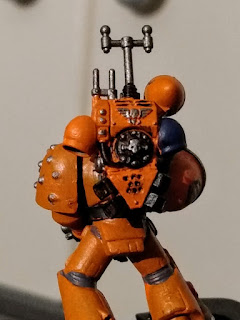 A close up of the pack

As you can see, the pack isn't perfect and if you do look really close you could probably see where the bottom section isn't quite on level but overall I really like the way it has turned out. It looks like a proper pack, not just a guard vox on a marine. The different antennas give it a nice feel as well, although the big speaker probably is not required for Marines, I imagine that it would be used to broadcast messages and encouragement to near by allies or threats to enemies. 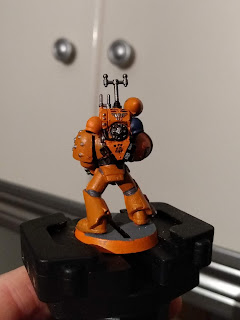 Wide angle of the pack 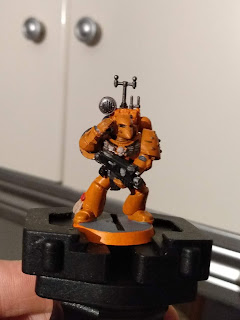 A shot of the front. Nothing has changed round this side.

In case anyone was wondering, he's the fluff for Brother Amuto:

Brother Rafael Amuto is an ebullient character. The youngest of the force, he still rejoices in the Emperor's work and is always Keen to impress his elders with his ability and zeal. Amuto was chosen, not for his combat prowess but for his technical know-how and is relied upon as the main vox communication from the squad to the rest of the company and beyond.
Posted by Steve at 12:00:00 No comments:

A short while ago I showed off the Blood Angels kill team, or rather the Eagle Knights Kill Team and all but one model, the Sternguard Sergeant Redolpho, was painted and pretty much ready to deploy apart from finishing off the base. Well that has now changed. 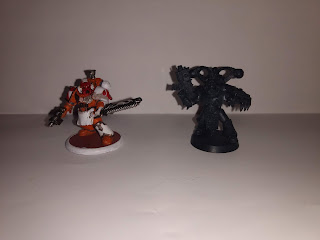 Sergeant Redolpho on the right, resplendent in black primer.

There have been a few changes to my original concept, mostly in cosmetic areas. I originally intended to have a metallic style helmet, similar to the vanguard vets bronze\gold helmets but when thinking about it I decided to go with a similar colour to the devastator squads, as the Sternguard are considered more of a support unit for the Eagle Knights. Not being an actual devastator unit, it couldn't be dark blue, so a quick rummage through the paints and I came up with the Calgar Blue. He also sports the standard squad marking on his pack, with a blue vent. The only none standard part of the model is the foregrip of the boltgun, which is painted up in a bone colour, which is explained breifly in the updated fluff below and will be expanded upon in future posts. 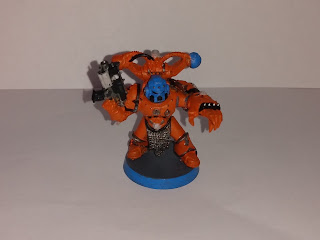 Sergeant Redolpho, now resplendent in the orange of the Eagle Knights 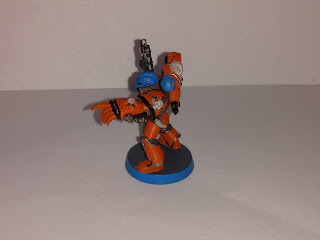 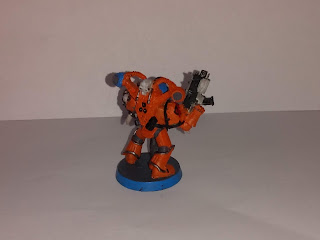 Vulture Legionnaire Decanus Nicodemus Redolpho, or Sternguard Sergeant Nicodemus Redolpho, is not quite so charismatic. A serious and stern and some what  dour man, he is nonetheless an excellent shot. Armed with his special issue boltgun, he was recruited to the team for his ability to eliminated targets at range, in even the most cluttered of environments. Nicodemus' boltgun has a rather special grip, made out of the bones of his first kill as a Legionnaire, that of a Tyranid warrior.  He is also armed with a power fist, although he generally uses this for punching holes in walls (to shoot through) and less for fighting, preferring to keep at arms length from his quarry.
Posted by Steve at 12:00:00 No comments:

Keeping busy during these difficult days.

We, like many others, have been through a period of self isolation, with a number of us exhibiting high temperature. Luckily none of use seem to have been too affected and it appears that it may we'll have been due to something other than Coronavirus but I suppose we won't know any time soon. Anyway, that's not the point of the post, this is; 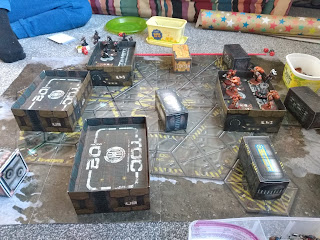 Yep, I've been playing  a few games with the youngsters. I don't remember exactly how may games we've started, as I quite often have to bail halfway through due to one reason or another (usually the littlest one waking up from his nap). Some of these games have been really very good games, such as the one where 4 chaos Marines and 6 cultists took on 3 terminators and a marine, which ended with the last chaos marine managing to take out the last terminator and another game, with my blood angles (below) against Militarum Tempestus Scions, with that too going down to the wire and one marine being left on the field once all the dice had been rolled. This would have been very different if the power fist equipped Tempestor hadn't  fluffed all his attacks. 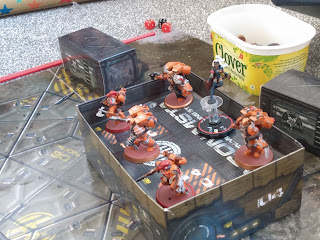 Some of the games got a little bit over the top, with huge numbers of troops, heavy weapons and a ridiculous number of dice rolls! 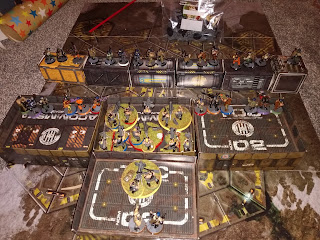 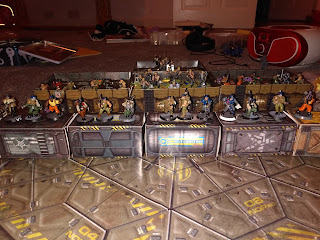 These games often only got a turn or two in before boredom set in and things got very silly or the plot was lost but it kept us occupied for a few minutes.

We're just two weeks in to what could be a very long period, in my opinion we're going to be like this until the kids go back to school  in August! I suspect that there will be many more games played yet!
Posted by Steve at 12:00:00 No comments: