This post has been sitting in my draft box for a few weeks but after 4 and a half years the blog has hit 60,000 views.  Ok, so not a massive amount of hits compared to some blogs out there but I'm pretty happy with how things are plodding along. I haven't been posting very regularly recently due to the new addition to the family and the fact that I'm not rally getting time to do anything hobby related at the moment.

In the past I have gone through the details and statistics in detail, as I have always found them quite fascinating but I will just Doing a quick run through this time around. We'll start by looking at the all time records. As you can see the blog is just over the 60,000 mark and while the last month's views say they are nearly 5000, in truth the monthly views are usually just over 2000 but this month the russians were playing around and have bumped up the figures somewhat. 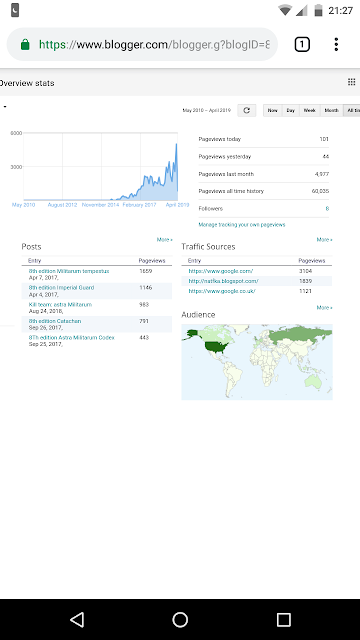 You can also see that there has been a steady rise in viewer number since I started all those years ago.


At this point, blogger and my phone decided to have a little disagreement, which is fairly common unfortunately. This resulted in me deleting the monthly overview shot from this post. Now, if I had been clever I would have backed up the photo but I'm not, so I haven't and as such I have no idea what it says. So moving swiftly on..... 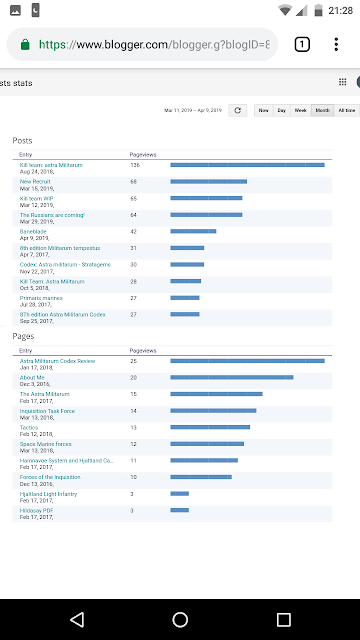 The most popular posts and pages over the last month. I have often noticed that the figures for the posts don't match up to the blog visits. I think this is due to the fact that I post the complete post to the home page, so anyone can read the post without having to actually view the individual posts themselves. 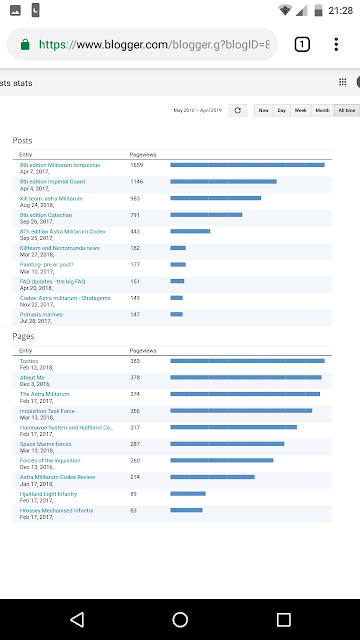 Most popular post ever and there seems to be a clear winner from the 8th edition MT post.

Next up are the traffic source stats. For most people they probably mean nothing, nore do most of you probably care where my visitors come from but for me it's interesting to see where people hear about my blog. Mostly it's Google or Faeit 212\Natfka but there are some ransoms in there plus 40kaddict always send me some traffic (as always many thanks Dave) 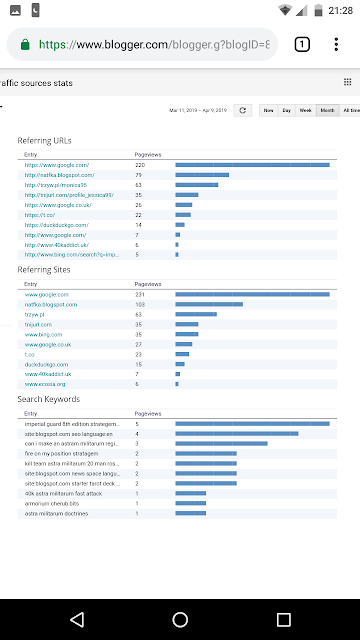 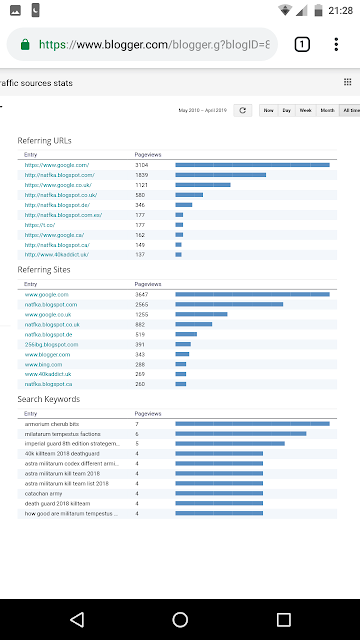 Next up we have, as far as I'm concerned, the most interesting, facts and figures, the audience stats. 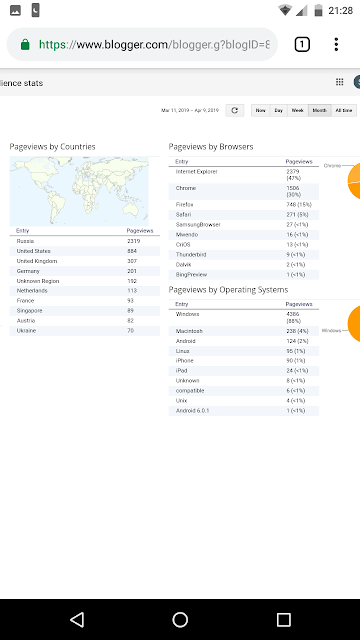 The monthly views are slightly off due to the Russian connection. Usually  the US tops the country chart with the UK in second place. Russian is usually somewhere around 3rd or 4th on the list. Internet explorer or edge as I think it's called now, is still a popular browser but Chrome is always up there and, as shown below, is usually the most popular choice for viewing the web. Despite what we seem to be told about the rise (again) of apple, most people still seem to prefer good old windows. 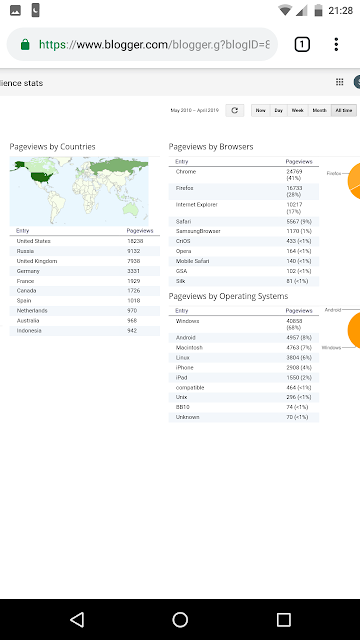 The overall figures are pretty telling I think. America is by far the most active viewer of the blog, with the UK usually second but with the above mentioned bump in Russian views, try they have jumped up to the second place on the list.  I'm pretty sure that if I checked back through the previous posts that I have done about the number of views the blog has seen there will be little difference in the other countries on the list. One thing that I know is the same, is that the top 3 countries still make up over half of the total views on the blog. Also Chrome and Windows continue to be the dominant force in the world.

One additional thing I have noticed recently is that I have been getting a lot of hits from "unknown region". While this is slightly annoying, as it renders the map blank, it also raises the question, where are these views coming from? Is it a country that Google blocks or are some people blocking there location from Google? With the rise of awareness of cookies and the other tracking software, are people actively blocking there location? Who knows, I certainly don't but then I'm not very internet savvy, the whole coding thing just confuses me.

Anyway, that's just a quick look through the stats from the last 60 thousand views. I'll be looking to the 100,000 mark in the future, although I suspect that it will take a while to get that far, especially with the recent lack of posts!

So, a couple of months ago, my local club had a model sale, where you could take your unwanted models along and see if any other club members were interested in buying them. One member brought along his old tank army, featuring 3 super heavies and 8 LRBT's. In have always wanted a super heavy for my collection, my first choice being a Stormlord, with its twin Vulcan megabolters.

So when I turned up to the sale to see three super heavies sitting on the side, I got quite excited. One was out of the running straight off, as it was a Shadow sword. Now, don't get me wrong, shadow swords are great at taking down big things, such as knights and other super heavies but when you not facing them, they aren't much use. 3 strength 16 Ap-5 2d6 damage shots are a bit overkill for taking out marines, even primaris ones.

The other two super heavies there were a Hellhammer and Stormlord. Given the choice and what I said earlier, you'd be forgiven for thinking I'd go straight for the Stormlord, however, the Stormlord had seen better days. It was missing several bit, which I could have scrounged of eBay but I couldn't be bothered, so I went for the Hellhammer. I also picked up another LRBT, meaning I now have 4 for a complete tank "platoon". 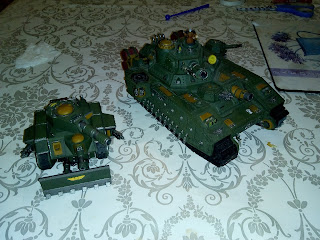 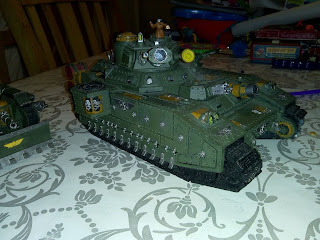 So, here she is. She needs some work, mostly just a few touch ups and a little bit of repainting here and there. They are tabletop ready as they are, which is useful but I will still adjust them a little to better fit the rest of the tanks. The main issue with the current painting is the brown highlights, which I will turn to green or, in some case, silver. The commander also needs finishing off. 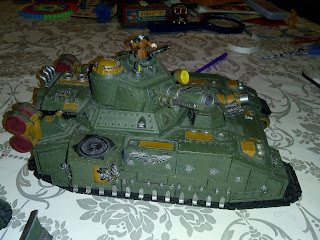 The yellow of the lights shows up really well in the pictures here but in reality they are very faint and need re-doing. Also the first bit of damage, the missing lascannon turret. You can also see that the heavy bolters are not fitted to the sponsons very well and I may need to split the sponsons to re-doing the bolters housings. 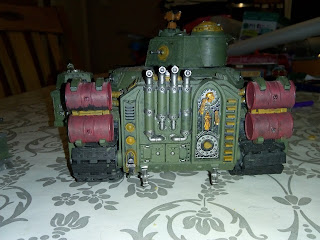 So touch ups required at the back and the barrels definitely need another coat of paint on them. 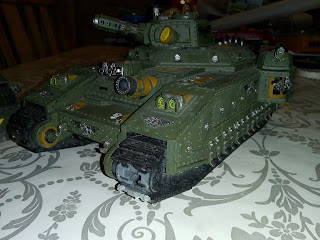 Second minor damage, a couple of track links missing, these should be easy enough to replace, either with bits from underneath or with green stuff. 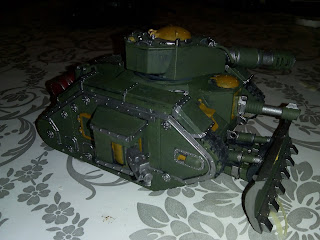 The LRBT, again needing a minor repaint and touch ups. 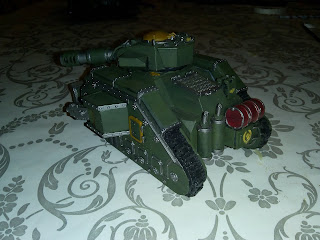 As with the bigger one, the extra fuel tank needs another coat of paint.

While the Hellhammer would not be my first choice of super heavy tank, it is a solid choice. With 2d6 shots at S10, -4ap and doing 3 damage per wound, you are able to put some hurt on most things. Ok, it's a little overkill on troops, but not as bad as the shadowsword. Your looking at 7 to 8 shots, hitting about 3 to 4 and doing almost as many wounds in most cases (as you'll be wounding on 2's most of the time and 3's otherwise). With 3 damage each, that's around 9 to 12 damage a time and that's not including the rest of the weapons, including that critical lasgun out the back!

As for deployment, I will usually run the Hellhammer with the 4 Russ's, as an armoured fist group. 2 of the Russ's are old school ones, with fixed weapons (battle cannon, lascannon hull and bolter sponsons), the other two are new versions, one normal and one demolisher variant. I plan on running the as two standard Russ's, one as either a punisher bolter boat (punisher plus 3 heavy bolters) or executioner with plasma sponsons, depending upon the enemy and a vanquisher tank commander with lascannon and bolter sponsons. The battle tanks will flank and provide general protection, the punisher\executioner will go on point and the vanquisher tank commander will hover at the back to give out orders where necessary.

The choice of punisher or executioner will depend upon the enemy. For light armoured enemies, such as eldar, guard and tau, the punisher will be better, as it is there to take out the troops and with the battle tanks dealing with the higher save units. If I'm facing power armour, either chaos or imperial, or other high save armies, then the executioner will be first choice. The inclusion of a vanquisher will also puzzle some people, as many will suggest that a regular battle tank will yeild better results, which is generally true against most targets but against single large targets, the ability to roll two d6 dice and pick the highest for damage is key. Doing this twice is even better and being on the tank commander your on a 3+bs, so more chance of hitting on the first place.

The whole lot will, usually, be supported by an armoured infantry column, with a couple of vet squads in chimeras and a hellhound, with 3 sentinels pushing forward to screen any deep striking units. This will produce a mobile force with a central mobile castle, with mobile infantry for grabbing objectives and forward screen and all for 2000 points.
Posted by Steve at 12:00:00 3 comments: