Well, I got down to the Sunday club again last week and while I didn't get a game, mostly as there wasn't any. However there was a few games of Magic going on in the back ground. I spent most of the time talking, aka moaning, mostly about AoS and various 40k things. I like these sort of sessions as they give a chance to blow off some steam about something with others who know what your on about, the wife just doesn't get it and the bairns just want to eat the models, well one wants to eat them, the other want to crash cars in to them. I know there are various forums and groups, but there are a lot of haters out there and things can get a little to personal for my liking, mostly the insults. Its all very childish and unnecessary, so I tend to stay away. Talking in the group though is different as you all know each other and have some respect for each others opinions and actually take the time to listen and digest the info, rather then just ignoring it and carrying on as usual.

So what was the talk? Mostly about the future of 40k, and whether it will get AoS'd or not, we were all on the not side, but I also had a bitch about Tau Interceptor and Marker Lights. General agreement was made on the Interceptor but it seems I'm on my own with Marker Lights, oh well. but there is still a general hate of Eldar, well, I say hate, it was more the fact that they are wrongly played/costed by GW. They should be either an Elite army with there current rules but point cost increase or they should keep there current points but be nerfed pretty badly. We all agreed on the first case, they should be an elite army with strong powerful units with good fire power or combat, but with few models. A unit of guardians should be able to out shoot a squad of marines but cost more type of thing. Won't happen but one can hope, I think Tau are in for some nerfing though.

As for AoS, there is also of love for it round here, mostly as a number of players are vets of the 1st edition, which apparently was very similar. There is still some split of the new models, which I've mentioned that I like but a few think there too over the top. I know that there is a lot of hate out there for AoS right now, but the game has yet to settle and were still seeing the new system evolving. Time will tell if its successful.
Posted by Steve at 12:00:00 No comments:

Well, this is the current list for the Dark Guardians. This may change as I get more info on the Ravenwing Detachment and the use of HQ choices for it.

**Need some confirmation I can field this as part of the Ravenwing, if not, then the three bike squads will drop in to the CAD as FA options.

Tactical ideas are as follow; Tac squads do nothing but hide and camp on objectives, bikes charge up and cause as much havoc as possible while they survive and the termies drop in at some point when needed and hopefully where they are needed, using the ravenwing units to assist in the drop. The vets and the command squad along with the interrogator will form the mainstay of the army and go hunting across the table. A simple list, but probably a bit of a glass hammer with only a few expensive units.
Posted by Steve at 12:00:00 No comments:

So with the changes to the SM codex, the Emperors Disciples list will be changed slightly. One of the changes is also due to the new DA codex, as the Termies will be shifting chapter to the new Dark Guardians chapter to form part of the Deathwing force. This has opened up a few points and made me look at options. While this list is not finalised, and wont be till I get to see the new codex in full and in person, the list will not change dramatically from what is listed below.

As you can see the list has changed a little, with the removal of the Termies and Dread and the inclusion of Command squad and upping the Sternguard. The Razorbacks have also moved to FA slots to give some flexibility to there deployment. The overall aim of the force has not changed, as has the way I intend on playing it, all that has really changed is what unit will be taking on what role.
Posted by Steve at 12:00:00 No comments:

This is just a quick post to air a couple of thoughts. There have been a few posts around the place talking about 40k getting the AoS treatment. Although there has been quite a variety of suggestions as to how this will occur, from the full on AoS treatment with no points system and overly simplified rules, down to just a skinning down of the special rules. So what will happen, personally I think that it will just be a skinning down the special rules and some of the other rules in the main book, such as assault. It makes sense to skin down the special rules and make them more generic, maybe keeping the names but just attaching them to special rules in the main book. This will mean that some units and most races will loose some of their unique rules, but it will mean that there is less to learn and it becomes easier for everyone to understand the different rules of the other armies.

I don't think that the full no points treatment will happen, this is because 40k is still a very popular system and I think they will not mess with it to much for fear of driving off to many players. granted the main cash generators are the newer, younger players, but even so, vet players still have quite a presence. WHFB was a different kettle of fish entirely as it was a dying system with a dwindling pool of players and something drastic needed to be down to make it profitable. 40k is not in the same situation yet, we'll see if it ever does get there, not that I think that it will, despite what some may say.

So, I guess after all has been said and done, we'll just have to wait and see how the dust settles from AoS and whether 40k gets some of the same treatment.
Posted by Steve at 12:00:00 No comments:

Well, here we are, the first pictures of my new MT's! There are a few pictures here. I've finished a few of the units, as pictures below, but to start, here are some pictures of the unit in all its current glory.
﻿ 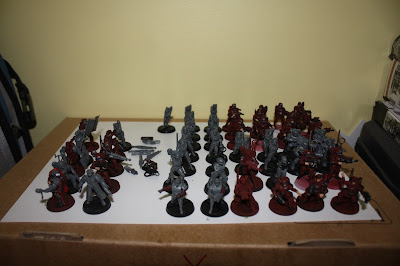 Two shots, above and below. The command squads are on the left, with the main squad on the furthest left and containing a vox, medic, standard and a flamer alongside the Commanding Officer. The second command squad contains just a vox and 3 HS volley guns. The 6 squads on the left have 2 special weapons each, totalling 4 of each of HS Volley, Plasma and Melta. All squads also contain a vox and 4 Scions. You might also notice one bloke out of formation at the back, they will be carring a flamer, one of the weapons that can be seen in the pile in the middle. 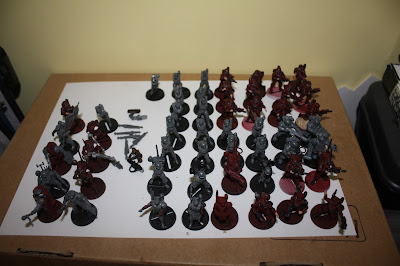 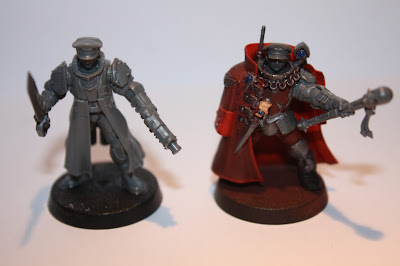 The commanders. One the left is the 2ic, with bolter and sword, wearing his cloak of office and on the right is the Commander, with better cloak and staff. This shot also shows the difference between the GW and Dreamforge models, although the DF model has GW arms and the GW model has a DF head. I'm not too sure how I'm going to paint the arms and head of the Commander as the base was airbrushed and when painted it looks very different. I'll figure it out at some point! 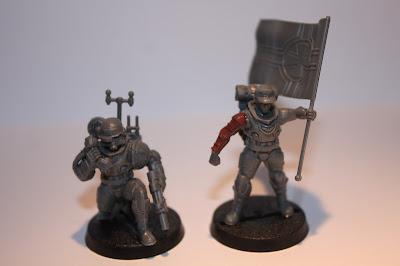 These boys are from the Commanders squad. The vox caster has a slightly modified GW vox from the Scion boxset, the cable from handset now connects at the top and not the bottom, and the arms were modified slightly so that they fitted properly on the model. I know some might wonder why the guy is on a handset when he has a helmet fitted, but lets just ignore that and realise that the bloke looks cool, shouting out orders or calling for support. The Standard bearer is all DF, I pondered the GW standard but its very specific, being pre-printed with the emblem. The DF model is still pre-printed but at least its different, I do prefer having the option for a plain standard to use (even if my free hand is crap!!) I'm not to happy with the standard bearers right arm, I wanted a pretty static pose, but the only arm options I had didn't look right, so it might be coming off and I'll have to see about converting the arm to bring it closer to the body. 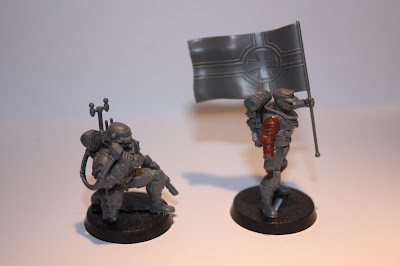 Finally a close up of some troopers. As you can see there all a work in progress. On the left is the new HS Volley gunner, with a weapon from the DF Panzerjager boxset. I cut of the stock, but now I'm wondering if it looks a little front heavy, but I still think it looks good, like a proper support weapon. The bloke in the middle is one of two flamers that will be in my army. The flamer is a compact variant, similar to the compact lasguns that the troopers carry. Also you might notice that the flamer carries its tank backwards, this is so that in urban or jungle combat the tank wont get caught on anything and drag back the trooper, but it will slide over the obstacle. The last man is the Command squad medic. As with the command squad vox caster, its a DF model with GW arms, and also a GW Cadian medics backpack (which you cant see) so he's fully kitted out as a medic. 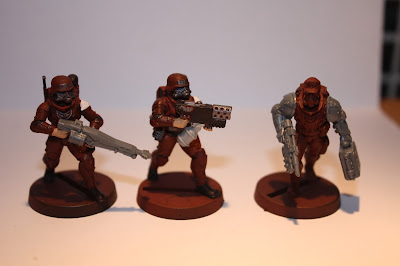 I'm hoping to get a compressor for my airbrush soon, and then I'll try and get these models base coated. Once there base coated there fairly easy to paint up as there is not masses of detail. I'll hopefully get some photos of the ladies up here soon, once I've got some arms and possibly weapons on them. I'm still considering a box of Eisenkern stormtroopers to put each squad up to 9 troopers each and the two command squads, but on the other hand I'm thinking of fielding this lot as the Ground Assault force, so only 1 command and 3 squads with 4 transports, hopefully the one from Anvil Industries. In addition the new scout vehicle they have previews of may well solve my Tauros problems!
Posted by Steve at 16:49:00 No comments: