Well, this is the last post for a while on the Disciples. Devastator Squad Foxtrot, the main AA unit for the army. 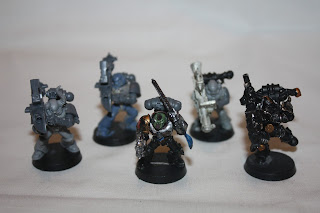 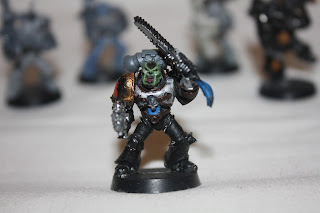 The Sgt, who when repainted wont look so unwell. 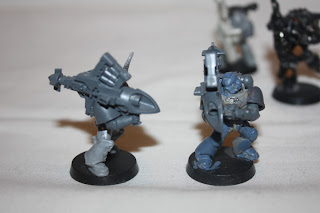 New old launchers, straight out of BoC. I really love the look of these guys, even if the poses are a little off. There nothing compared to the other two guys though! 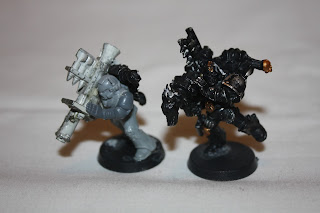 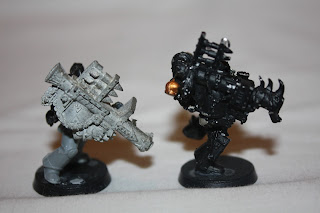 So, ones trying to blow up his feet and the other one looks like he's hitting the dance floor. Not my two favourite poses, I suppose I will just have to place one at the top of a building all the time and hide the other round a corner!

So dreads are created equal afterall. The new errata posted on Facebook has confirmed what many of us knew was coming,its always just been a case of when. This is also the first of the official releases, rather than a draft version as we've seen up until now.

So what does this mean for me? Nothing, as I don't currently run and dreads in any of my armies. I may start with my DA Guardians but that's for the future.

I thought that I would have a little break from the Disciples, after all I'm sure you don't want to see endless posts of near repetitive shots of grey plastic minis! So, when I was looking through my bits box the other day and came across some spare bits that I thought might make some good scenic bases and add a little something to a few of the characters, make them stand out a little for the masses.

I pulled out my characters from the Hjaltland LI, namely (from left to right) medic, Master of Ordinance, Officer of the Fleet and the main man, Commander Ollaw Jhonisoun. At present, they are just on their standard bases and look a little bland. As special characters I thought that they should have something extra. 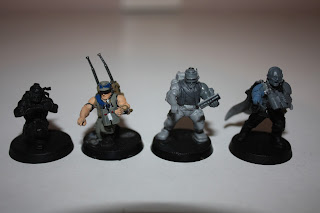 And this was the result. You'll notice an extra character has snuck in, that the Master of Ordinance from the Hrossey Yeomanry. I redid his base as I had a few extra bits, so I thought I would do both of the Officer of the Fleets the same, as to keep some consistency across the forces, especially as they are supposed to be attachments from the Navy. 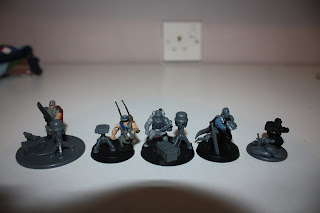 Here are a few shots of the individual models. Some of the details are hard to see, mostly because I don't have a light box or anything and my set-up for photos generally consists of finding a space on a shelf or window sill and taking a picture.

Medic, prepping himself behind some sand bags, ready to dash out to attend those in need.

The Commander, cape flowing in the wind. Behind him is some kit and rifle, either his or some that has been left behind by some forgetful Guardsman and to his side, just visible on the right picture, his sword.

Officer of the Fleet, with communication relay and data slate, keeping an eye on the movement of any aircraft that maybe in the area.

Master of Ordinance, with range finder and targeter and a set of good old fashioned bino's, ready to relay co-ordinates to the waiting artillery units.

The Hrossey Officer of the Fleet, again with communication relay and a field computer.

With most of the Hjaltland command squad rebased and I have been wondering about rebasing the other members, namely the HWT and the Standard. The Heavy Weapons Team will be easy as its just a case of sticking them on to the proper 60mm base, which only leaves the standard. However, this will be tricky as I want the standard to be the focus, not the base, so I may just leave him be.

Question;  what do you do when you have spare models and to much time on your hands?

Answer; create more armies. I mean, what other possible answer is there for a man who already has to many armies, most of which are unpainted.

Now, I know what your thinking and your right, it is silly. The main reason for these thoughts is that I'm planning on getting Renegade for my birthday (ssshhhh, haven't told the wife yet!) and as such I will have two knight's to add to the collection, thus I need a supporting army to go with them.

So, I shall introduce the House of XXX (no not the X rated house, just doesn't have a name yet) and the knight's Dagalien and Daggri. Dagalien is a Knight Warden and is the senior of the two knights, while Daggri is a Knight Gallant. The rest of the force is made up of members of the houses subjects, sworn to protect the great and ancient war machines. They will be formed of an allied detachment with a HQ and two platoons with a significant number of heavy weapons alongside numerous infantry to protect the knight's from being charged. I'll write a proper house history at some point, after I get the box set, I'm not gonna count my chickens just yet.

This will form a 4th IG/MT army, and be of a different format again, giving me an infantry, mechanical, deep strike and super heavy based armies. And this got me thinking, there aren't many other type of IG/MT armies apart from Aircav (maybe for the future) but what other types Marine armies are there?

Now I've got a shooty one in the disciples, so that basically covers ultrasmurfs and Imperial Fists, I have bikes and TDA from the Guardians, taking out DA and Scars. The Knights take out BA and Raven Guard. So that leaves the Sallies, Iron Hands, Black Templars and the Puppies.

Now, Sallies don't really interest me and there not that much different from the other codex forces, the same can be said for the Iron Hands. That and I could run the Disciples as Iron Hands if I wanted. That only leaves the Templars and the Puppies. Now I'm sure I'll get wronged for calling them puppies, but hey, yap yap yap little doggies ;-)

Now I know that the wolves have not successors, and that the ferisian wolves are unique to the chapter, but I like some of the rules. So what would I do? Simple, the chapter, the Stone Dragons, is based on a feral world of large open savannah and grass land where the local tribes live in stone age existence, large hunting dogs (or cats, I haven't decided yet) roam the plains and are used for hunting by the tribes and of course the marines. Whilst I will keep some elements of the wolves, such as wolves, others will be lost, no psykers, no Calvary, no wolfen etc.

The force itself would be a small elite type of affair, the main body would be a large pack of blood claws with a full grey Hunter squad and several wolf guard units, and a full compliment of HQ units and as many dog/cats as can be fitted. I'll write a more comprehensive chapter history for them at some point, but as there a bit of a paper work exercise it could be a while.

That just leaves the Templars, or the Brazen Hawks as they would be. The hawks would be a vehicle heavy army, namely land raiders, with few HQ and lots of large squads of crusaders, maxed out to fit in the crusader raiders. All the units would be fixed for combat with the fire-power being supplied by the raiders. They would be very similar to the black Templars in many respects apart from their history, which I have a good idea of, I just need to put pen to paper as it were. Again these guys are really a paperwork exercise, so the process will probably be quite slow.

The marine armies are not really ones for the table top, as my current grand plan is to finish painting all my current IG/MT armies plus the knight's if I get them, and paint my marines. The Knights are waiting to see what there Gladius detachment brings and what adjustments I need to make, the disciples need to be slightly adjusted still to meet the new Sternhammer Formation and the Guardians still need some decisions making but likely a very basic Lions Blade detachment (out of the B@C box) plus the wings will be made bringing to force well over 2000pts in total. I still need to figure that out.

So there is still lots to do, I'm chipping away at it slowly, very slowly but chipping away none the less.
Posted by Steve at 12:00:00 No comments:

And finally, Tactical Squad Charlie! I know your probably getting bored of all this already, but the next few are a little more interesting I promise! 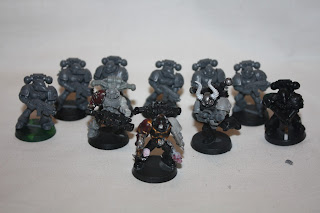 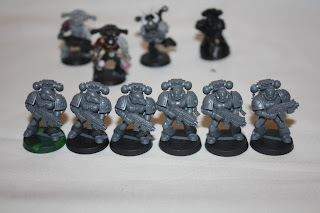 A demi squad of DV marines. 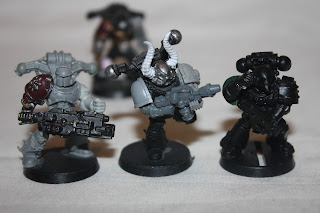 And just for a change an extra figure in with the specialists! Heavy Bolter on the left with dancing flamer dude in the middle ( I know its a little silly the pose, but I was being quite lazy with these squads) and old skool marine on the right, plastic though, so not that old, but older than the rest of his squad mates. 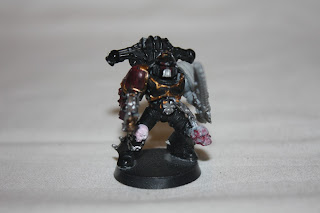 And lastly, the Sgt, possibly the coolest Sgt out of the three.

So that's the tacticals done, hopefully the rest will be a little more exciting. There is nothing ground breaking but there is a few old skool models and parts scattered about. 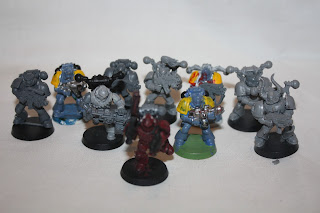 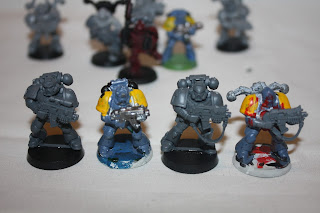 Tactical marines, this time two from AoBR and two from DV 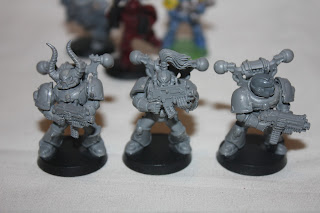 The rest of the marines are modified chaos boys and mildly modified at that. 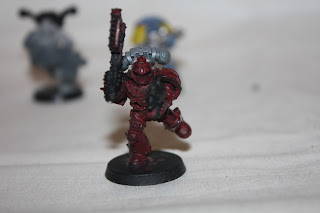 Sgt, ex-khorne berserker, re-enlightened to the ways of the Emperor, but still wielding his chain axe! (count as CCW) 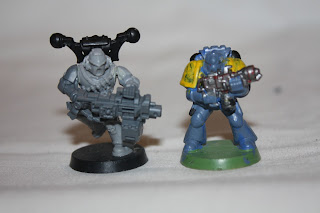 Specialists, Heavy bolter on the left, using a standard tactical heavy bolter and a Flamer, possibly from AoBR? Whatever its from though, it need a dam good stripping as pretty much all the detail is obliterated by masses and masses of paint!