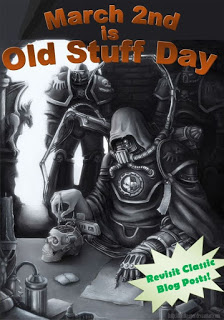 So, today is old stuff day, and I though that I would join in the fun. I've had a run through all my old posts and decided that I'd throw this post back out there. It was a piece of fiction I created just on a whim one day when I was bored (something I have no time fir these days!). It probably not going to win me any awards, but I enjoyed writing it and as it was a very early post, from march 2015, I doubt many people would have seen it at the time, so here it is;

"Is the target present"

"Continue over watch, secure evac route" not that Demi-sergeant Ilar would need such instructions.

Dam, why were they coming from the south west, they were supposed to be coming from the north west! 5 days laying in wait and they may end up getting trampled by hundreds of rebels, dam AM intelligence! Hopefully they will avoid the thick woods and marsh and keep to the road. At least with the ford ahead they will have little choice but to move in to the kill zone.

Even with his enhanced hearing the sounds of the squad around him preparing their weapons and bodies to react were barely audible, a good sign, even after all this time laying silently and still in the damp ground, his marines remained unaffected. He looked to his own weapon and started to run though the standard checks, testing the magazine, the bolt and a dozen other items. At the same time, he tensed and relaxed each muscle in his body, ensuring that each was ready for an rapid and instant  response should one be needed.

Good, so luck at last. He thumbed a response and a green light lit up in his helmet to show it had been received. It was time to prepare mentally for the task I hand. A prayer to the Emperor and the Dorm and a blessing to his bolter, Some Concentration. The name still brought a smile to his face, even after all these years.

"Recruit Maxen, what are you doing!"

"Your supposed to be shooting the target NOT the wall! Some days I wonder if you could hit a Thunderhawk with that bolt pistol, even if you were standing INSIDE the blessed thing! You'll never hit anything with out some concentration."

The next day they had been handed their personal weapons and from the first moment that he had laid eyes on the battered old bolter, only one thought had come to mind. While the other recruits had taken the existing names engraved by the previous recruit or had thought of new names, such as vengeance, destroyer, justice and slayer, he had only one name in mind, Some Concentration. While others had received their new bolters upon becoming full battle brothers, he had kept his and carried it all these years. With it he had become the best shot in the company and one of the best in the Chapter, and that way why he was here.....

His concentration was broken by the twinkling of comms lights in his helmet, two of the marines were talking. He opened up the channel to listen in.

So the target was entering the kill zone, sticking to the road and the dry ground, a good sign, maybe this wasn't going to be a disaster after all.

He could see the target now, the old man was not as impressive as he thought he would be, but it was always the same. It was hard to believe at times, but the story was always the same, this old man had raised the population of Hjaltland in to rebellion with tales of freedom and democracy. Yet here he was, looking fat and well fed, his rich clothes flowing in the wind as he was fanned and carried aloft on a luxurious sedan by half starved, sweating men and women, while hundreds more followed along hoping for some hand out or another. His key followers could be seen similarly dressed and looking well fed and watered, trailing directly in his wake, acting like gods amongst men. There would be no glory today, just cold hard retribution and justice.

Maxen raised his bolter in to position and squinted slightly down the scope, reading off all the targeting information.

A little longer and a little closer, then it would be his job to eliminate the target and the rest of the squad would take out any of the retinue that they could, hopefully killing off the power behind the rebellion. Although this would normally be a scout units job, the lack of available scouts and the importance of the mission meant that it had fallen to Squad Epsilon and himself.

This was it, the target was in the kill zone and in range. He drew his breath and thumbed the mic switch.....

As his vision cleared he could see the crowd of rebels recoiling and the targets sedan was no longer in sight, but what caught the attention of the sergeant most, was the figures that had appeared across the ford, Scions. Not many of them, and now that the crown was reacting and weapons were appearing, not nearly enough of them.

Maxen looked back to the crowd, the target was gone, the sedan lying discarded and broken on the floor, but he knew where to look as he scanned the back of the rebels. There he was, hurrying away like the coward he was, and they had the nerve to slander the Emperors name. When did He every run from the enemy. Maxen took aim with his bolter, zeroing in on the target as it moved through the crowd.

"Stand by to withdraw on my order"

He squinted down the scope, waiting for the shot. Waiting for that moment when the target would be in full view, even if only for a second.

He felt the bolter recoiled in to his shoulder, he felt the motion through his armour as if it was his own skin. He watched as the targets head exploded in a cloud of red and white, while the now lifeless corpse collapsed to the ground. He could see the reaction of the crowd around the dead body, recoiling in horror and shock. His job done, he took one last look at the scene, weapons had appeared on the rebel side, in quite some numbers, more than he would have expected and the Scions were starting to feel the effects of the rebels numbers.

As the squad started to withdraw, marine Tegid spoke up

"Are we to support the Scions?"

"Negative, we withdraw as planned" This was not the time for action, they were outnumber and did not have any support elements in place.

"I don't think they'll need our support" can a reply from demi-sergeant Ilar.

Maxen was about to ask that mean when the roar of jet engines became clear and three Valkyries came roaring over head, multiple launch rocket pods spitting death, door gunners leaning out firing their heavy bolters randomly and indiscriminately in to the crowd.

"Withdraw at speed, we move to the extraction point at half run, weapons free, eliminate targets as necessary, move, move, move"

The tone of his voice left little doubt as to the urgency of the message, the last thing that the sergeant wanted was to get caught in the crossfire. The Valkyries rockets and Scions HS lasguns could make short work of the squad if they weren't careful.

One last look back at the kill zone before the marines disappear over the hill showed a scene of carnage, with bodies all over the place, the scions advancing over the ford, with the now hovering Valkyries, continuing to pore rockets, multilaser shots and heavy bolter shells in the fleeing rebels. It was uncertain whether the full retinue of the heretic's had been eliminated, but whatever the case, the rebels had been dealt a blow this day and the Emperors Disciples had opened their campaign on Hjaltland with a successful mission.