So with the release of the fluff and lists for the Dragons and the Hawks, I've been putting together a few test pieces.

After a bad start, I based the hawks Grey and dragons brown, completely the wrong way around, things are working out well. I originally intended for the hawks to be bronze but they are now copper, as I have copper and not bronze. However, so far I really like the copper, but Im a little worried how the silver from the weapons will look against the bronze, I may end up having to do something different. 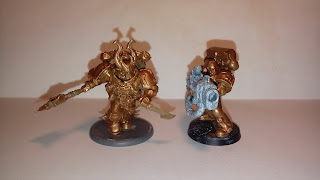 The Dragons scheme is going well and the base Grey is looking good. The librarians blue cloak looks nice against the Grey body, although both models require a lot more work. I think that the color scheme is going to workout well for these, and maybe the one that troubles me least. 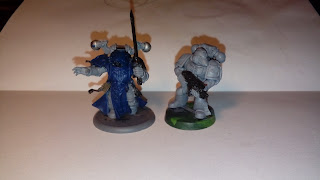 Im still struggling with this one. Originally I brought some Revell fluorescent orange to use but its very transparent and doesn't  cover very well, even over white primer. So I got some ratskin flesh to base the models before using the orange, but while better its still not great. I also have some Jakearo orange, which looks exactly the same as ratskin flesh but is supposed to be darker and more orange, so I might give that a go as well. I've also brought some troll slayer orange to see if that will work better than the Revell orange. 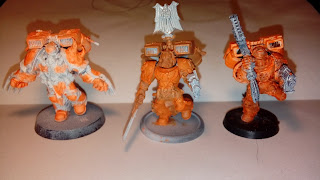 As you can see, left is just the Revell  orange, several coats worth applied over a white base, the right model is the same but over an over painted model, black base with a coat of white primer, very rough but just to get the idea. The middle model is Ratskin flesh over a white primer with the chest painted with the Revell orange. The only one that comes close is the left model, but its taken about half a dozen layers so far to get it to that color, and its still not perfect. 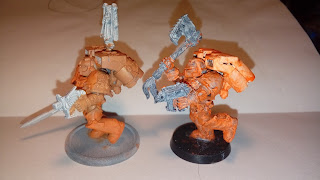 This shows off the two other models better. You can see the difference the basing makes on the right model, the jump pack orange is a lot brighter than the body, but still not great after 2 coats. The left shows the Revell orange over the Ratskin better, its better and brighter, but still not how I want it. So I'm going with GW Troll Slayer orange instead, see how that works.

Well, its a lot darker than I was planning. Kantor blue is the darkest blue base color that GW do and i only have a gloss blue from Revell. I still need to add the yellow and red details, so I'm still not sure on these. I wanted to avoid them looking like ultramarines, which I seem to be achieving, so that one advantage. 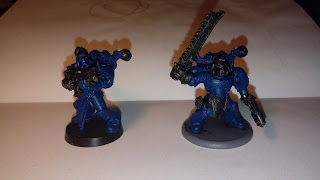 Defiantly not ultramarines.
Posted by Steve at 12:00:00