Edit: I'll start by saying that this post was queued up a week or so ago and now GW have just released, as in yesterday, some info in 8th. How much does this impact on my post? Not masses, but there will be a few bit that now don't make as much sense as they did before!

Ok, so there are many many rumours flying around about 8th edition. There have also been various posts that have been written over the last few months, such as the Burning Eye and Cadia's Creed. So why write another post? Well, I thought that I would join the club and put some of my own thoughts down on paper. 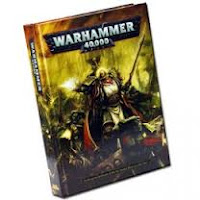 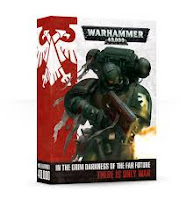 
Now, while there are a lot of rumours flying around, I think its safe to say one thing, there will be a dumbing down or simplification of the rules set. How much simpler things are going to get is another question, but probably the most eagerly anticipated answer. Now don't get me wrong, thus won't we an end times job, I think we can all acknowledge that. AoS/WHFB is not WH40K, and hasn't been for years. Points rant going anywhere and neither are formations and detachments. If anything we'll see more. But, and it is a big but, things really have got a bit out of hand.

Personally I don't see the main rules being slimmed down all that much, by main rules I mean things like movement, shooting and assault. The main phases of the game. I don't see the psychic phase being slimmed down all that much either. What I do see is a major slimming down of the special rules, both the universal ones (USR)  in the BRB and also the ones in the codex (CSR).

Why do i say this? Well in my opinion this is the area that is most bloated and also the aspect of the rules that has the most impact and time spent in game. Every unit seems to have a special rule and now with detachments and formations having yet more special rules, there are hundreds of the things, yet many of them are very similar. One I can think of from the top of my head is the Eldar blade storm (think that's what it is) which is really just rending by another name. There are several other variations as well, I'm sure that Nids have a similar CSR as well. So, if you just changed them all to rending, you would loose several rules in one strike. Ok, you'd loose a little of the flavour as you'd loose the names but that's a minor thing really and easy to fix (bladestorm = rending).

Going through and changing all the CSR's to there closest USR would take time, but would cut a lot of bloat. In line with this I also expect to see a lot of the USR's removed from the BRB and placed in to the codices, meaning that all the rules for an army, outside of the core rules which apply to every army, will be found in the relevant codex, much in the way that all the weapons profiles were dropped from the back of the main rule book.

I mentioned the psychic phase above, and will single this phase out. The other phases work and I don't think they need much tweaking, only a little here and there. The psychic phase does work but again is becoming bloated with so many codex specific powers as well as the BRB ones. I think that some of these will be replaced so that some of the powers will be exactly the same across different faction. It'll take a little of the flavour out but would reduce down the number of powers. Other than that, maybe we'll see access reduced, limiting you to only your factions powers? I'm not sure what's best here but can see something happening.

One thing I hope will also happen is the dropping of Death from the Skies. now I know some people like it, but its a massive rules bloat if you ask me, completely unnecessary and pointless in the main game. Yes it tries to add some flavour to flyers but I think it fails in so many areas its a waste of time. As a sort of flyer mini game it works but not as part of the main game. 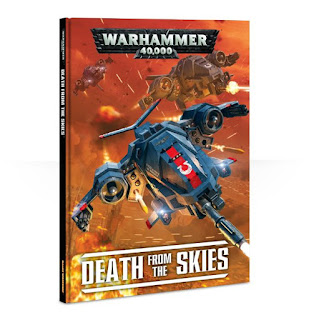 As I mentioned above, I can see codices changing, but they will remain an important part of the game. So I'll follow this post up with a couple of others detailing my thoughts on the main codices I play, guard/tempestus and BA/DA and a general overview of the others.
Posted by Steve at 12:00:00