Back to a kill team for a couple of posts! I haven't posted up about kill team in a few weeks but there has been a bit of work going on getting some more kill teams up and running, probably never to be played with!
This is the Ork Commandos from the Octarius launch box and initially I was going to sell these on, as I'm not a great lover of orks, however, I was persuaded to keep hold of them by my son and I'm glad that I did. Having spent time painting them up, I have found a liking for them that I didn't realise I had. Now, they are not going to become my favourite faction,  not even one of top 3 really, but I do think that they have a wealth of character and are fun looking models. I have gone with a very basic paint scheme, mostly dry brush with a few highlights of colour and I think it's worked out quite well. 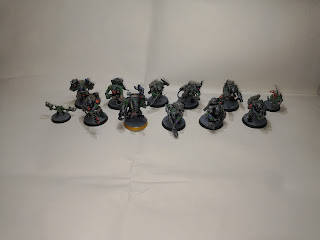 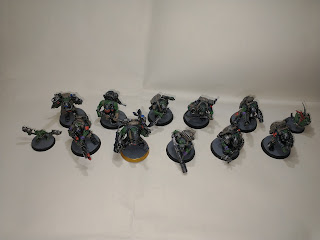 Spot colours popping quite nicely on some models. 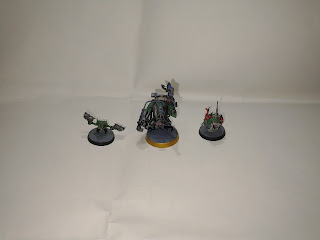 The boss and his minions.
Now, the observant amongst you have probably spotted that fact that the grot is not the correct grot model, ninja grot has gone full ninja and disappeared. I'm pretty sure my youngest has spirited him away some where but as yet I have no idea where he is, so a stand in model has been acquired from said youngest's collection. I really like the squig model, as it's such a fun looking model but still easy to paint. 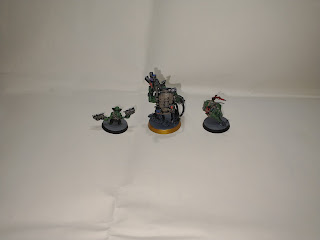 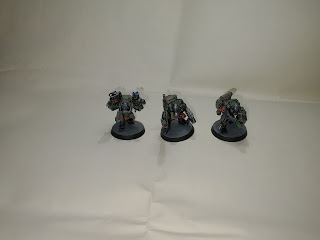 The gunz, all da gunz!
Next we have the guns, all the guns! Ok, so maybe not quite but it's the Dakka boy and two normal Boyz. The Dakka boy is as intended and is another great model, all all the commandos are but the Boyz are modified slightly, with both models duel wielding pistols. Although this doesn't actually give you anything in game, I thought it looked a lot cooler and more Orky than holding a knife. One of the things like most about these models is the Dakka boyz hat, very reminiscent of the old WW2 commando hats. 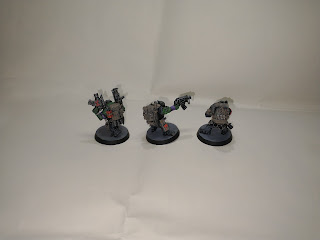 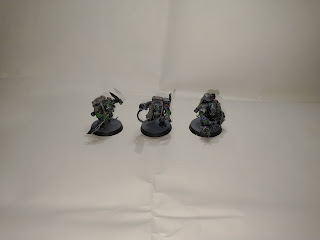 Getting up close and personal
The short range commandos are up next, with the slasha boy, Comms boy and Breacha boy. There's not masses to say about these three, there built as standard for the most part. The only change for some of these are that all the models have a mask or face covering of some description. I've done this to give them a more specialist, sneaky special forces look, similar to the CQB special forces looks you see. 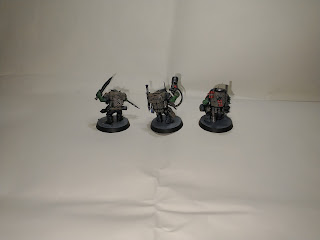 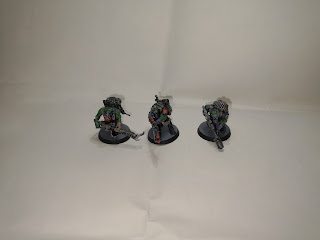 Da special boyz
The last three are the specialists, the Burna boy, Rokkit boy and Snipa boy. All of these three are built as instructed, so very little to say again. I did add some extras here and there, as with all the models, just to add some flavour. 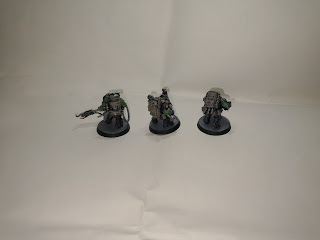 I really like these models and even with the simple paint job they look good. The red spot colours on they symbols and such also really pop nicely and add some colour to the otherwise quite dull colours. When these guys get played or not is another matter, as I haven't had a game of kill team in ages! I've another team that I've painted up to showcase here then it's on to other projects, mainly my Deathwatch but also AdMech.
Posted by Steve at 12:00:00