Just a quick one today as life has been a bit busy over the last few weeks, mostly down to this little chap: 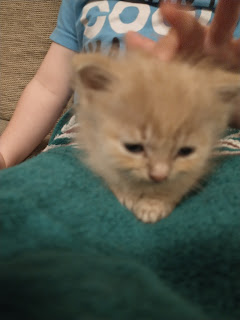 This small bundle of fluff is our new 4 week old kitten that was found abandoned in one of the barns where my wife horse rides. It was in a pretty poor way when we found it, it's about half the weight it should be and was very sluggish and quiet. After a couple of days of food and milk, it's proving to be very noisy, inquisitive and has no problems finding its way out of its sleeping box. So far our other two cats haven't been quite so excited about its arrival as the kids have been. Anyway, we're here to look at some of GW's technical paints, stormshield and 'ardcoat. 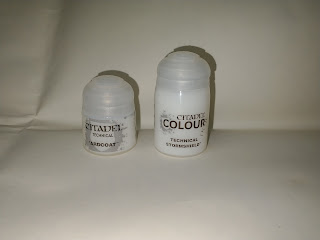 No, when I brought the 'ardcoat I wasn't actually aware of Stormshield, although it did exist, but after a while of using the 'ardcoat, I decided that I really wanted a Matt version. Which after a quick Google search lead me to Stormshield and a quick trip to my FLGS. 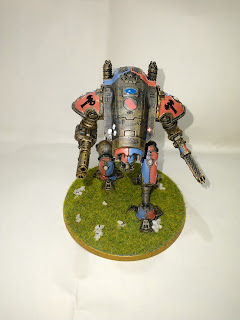 This is mostly just an excuse to show of my shiny Knights, as I haven't shown them off since I based them. It was also to show the transfers, which I had covered in 'ardcoat after using the munitorum Matt varnish, as they had obvious shiny patches around the transfers, but it didn't show up very well on the pictures. 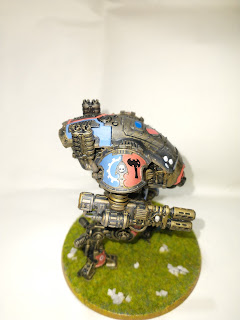 Next I thought I'd try showing the difference between a Stormshield covered transfers and the 'ardcoat covered ones (Stormshield above and 'ardcoat below). In person this was very obvious, with the silver Knights transfers being significantly shinier, however, in the pictures it's not very clear at all. 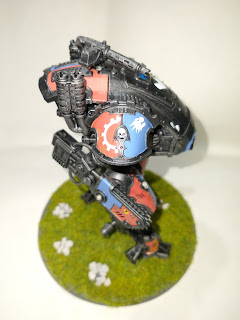 So I resorted to proper side by side comparison. 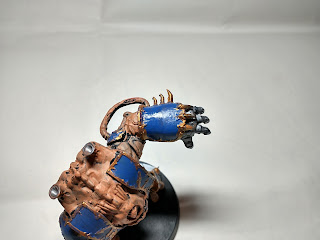 I took one of the kids models, an old hellbrute of mine that I don't use anymore and painted up half the fist with Stormshield and the other half with 'ardcoat. This worked significantly better than the other tries! 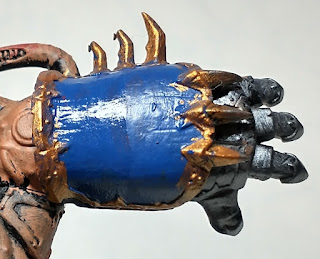 As you can see the left side is painted with 'ardcoat and the right with Stormshield, and there is a distinct different. Again it doesn't really show up as well on camera as it does in the flesh, but the 'ardcoat is definitely shinier. So, from now on, all the transfers, especially the older ones, will be getting a coat of Stormshield to help set and seal them. Yes, I know that I'd be better off with micro seal and micro set but I don't use enough transfers to justify the cost. The 'ardcoat will be used on gems and glass bits for models that aren't getting a coat of Quickshade.
So that's my little journey in to the wonderful world citadel technical paints.
Posted by Steve at 12:00:00

Email ThisBlogThis!Share to TwitterShare to FacebookShare to Pinterest
Labels: Painting