Hot on the heels of the Warhammer+ vindicator, we have the Chatachan characters that were brought with the ten pound voucher I received when I signed up. When I received the the voucher I wasn't sure what to buy so went with Barker and Strachan as I already had Marbo and I'm pleased that I did. I was actually quite impressed with the details on the old metal models. 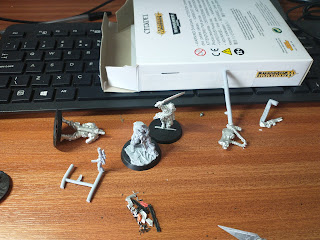 I really wanted to paint these guys up to the best of my ability, so I'm going to paint them in subassemblies, which is a new one for me! I started off just basing the models and building part of Marbo and in some respect I think I went a little far when building Marbo and should have had at least one more subassembly. 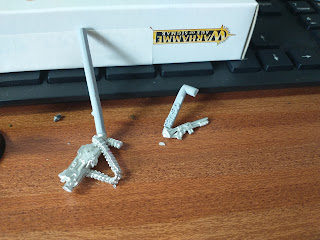 It took a while to get these sorted and glues on properly, I suspect that my super glue is getting a bit old and I need to open a new tube. Anyway, once I got them to stick they worked out pretty well, hopefully they will come off nice and easily when it's time. 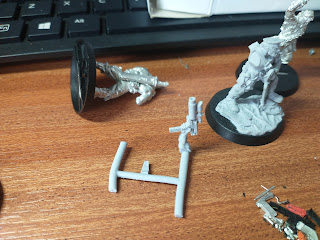 This is Marbo's arm and is the only resin to resin join that will need to be split later and I'm slightly worried that it won't split nicely, if I'd have though about it more, I would probably have done this differently. 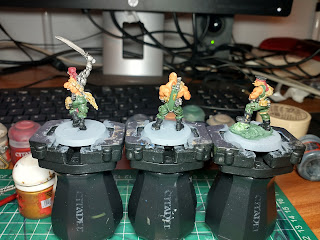 These two pictures show the first part of the paint job, base paints on and washes applied. There is still a long way to go but they are coming along nicely already. 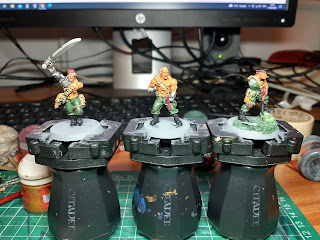 I'll be spending a bit of time over the next couple of days fine tuning these and while they won't be Golden Daemon standard, they will hopefully be some of the most detailed models in the collection.
Posted by Steve at 12:00:00