This post has been a while in the making it we got here in the end. With my son collecting Tau we have started as we mean to go on and have been magnetising as much as we can. I have shown this in previous posts, however, this has been the biggest project to date. The Ghostkeel and stealth suits only required 11 and 6 magnets respectively, this project required 37 in total. One of the delays was figuring out how to magnetise all the different bits and retain the original look and feel but also because I ran out of magnets. I originally brought 25 magnets, figuring that would be enough to last a while but with this project that just wasn't enough. I went to reorder my the original magnets, only to find they had almost doubled in price, so I had to hunt around for different ones, which took me a while to decide on which ones to buy. Anyway, when we finally had the new magnets and some new drill bits we picked up from my father in-laws extensive collection and being significantly higher quality bits than I would have brought, made life a lot easier! 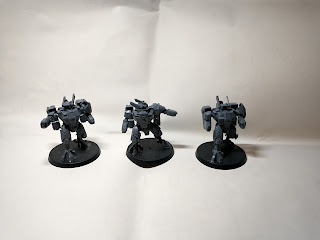 The actual models were fairly easy to drill and sort, however in the precess we have lost a fair bit of the detailing on the forearms. The original arms had indents with detailing inside, the new forearms as now flat and featureless. The backpack mounts are less obvious but not as clean as I would have liked. 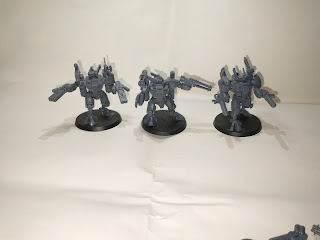 One of the good things about the kit is that there is lots of options for both weapons and support systems. 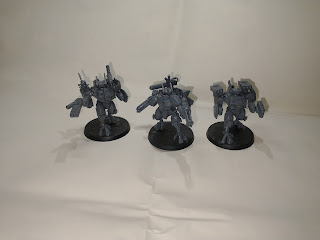 The only issue I found was that some of the weapons have a tendancy to droop a little on some of the arms, however, I think this might be solved with some refacing of the arms and weapons to level out the mating surfaces and give a better connection between the magnets. 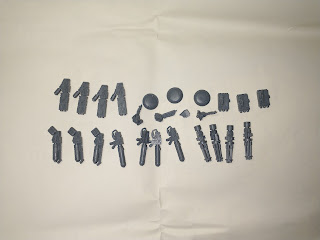 The weapon options.
Overall I'm quite pleased with how these turned out, and now they are sprayed up in blue primer ready for my son's to paint. This is then last unit to be painted in his current collection, so I'll have to see about getting a full army photo shoot soon.
Posted by Steve at 00:00:00