So following on from the previous post about my sons Tau, I thought I would continue with keeping up to date with its development. Now. as with all GW boxes, you get a whole host of options that very rarely get used, in this case its all the breacher parts. I had a little think about how I might use the parts and decided on doing so conversion work to form a unit of Gue'vesa soldiers. 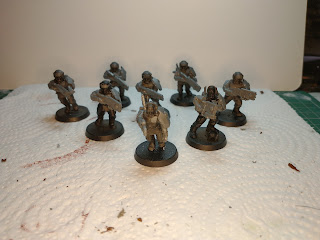 8 of the 10 models
For those not in the know, Gue'vesa is the Tau term for human auxiliaries. This idea is not mine but is something that has been around for a while now and its something that I always thought was cool. I decided to do this with the young mans bits as the price of Cadian models is significantly cheaper than buying extra Tau bodies. In total the 10 models cost me just over £8 ($10), a lot less than the £30 for a new box of Cadians and the £32.50 for more Fire Warriors. There was a minor issue in regards to the left arms, which are shared between the Breachers and Strike Squads but some spare guard arms came to the rescue. Another problem is that these are mostly the old Catachan arms and look ridiculous on the Cadian bodies but they are pretty much competely hidden by the Breacher shoulder pads, so its fine. 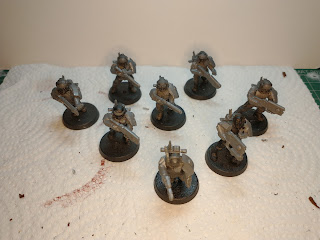 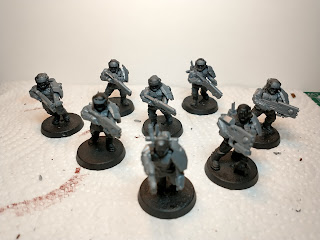 A better view of the back models
The Cadian models work quite well for Breacher conversions, as the Tau are no very numerous and they are careful not to waste the lives of Fire Warriors unless it is unavoidable. Well by using brainwasher Gue'vesa as breachers and sending them in to the close quarters battles and high risk environments, they can achieve victory and not waste the lives for Fire warriors, a win/win situation for the Tau. 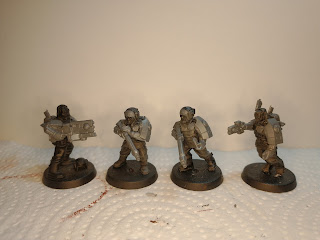 My favorite models
This little project brings my sons Tau army up to just over 800 points and now gives him 2 troop units as he builds towards a battalion detachment. I will see about putting up some photos of these once he has painted them up.
Posted by Steve at 12:00:00