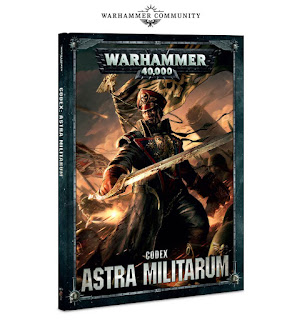 Just a quick post to mention all the new Guard rumour's that are floating around, specifically a certain picture that many people have seen. Unfortunately I have yet to see this photo, despite much searching and scouring through various threads and websites. Hopefully it will surface soon and we'll all get to see, because I am very interested in seeing. So far though I am not overly excited, as most of the units that have been mentioned I have no plans on buying. they all sound very nice and there has been a few mentions around that the new Kasrkins might actually be a new bespoke kill team rather than a general 40k unit, which if that's true, that will be very interesting and definitely something I will be looking at purchasing.

The main thing for me about all this is that the main units that I would be very interested in buying have not been mentioned yet, so I'll have to keep my ear to the ground a little longer to see if anything crops up.

All these new rumours and pictures do give me some hope that the codex isn't quite as far away as I had feared, maybe its only a couple of months away rather than the very end of the year! I'm still inclined to think its going to be September or October before we get it, but time will tell and with the speed of the last couple of codex releases hopefully I am wrong.

Email ThisBlogThis!Share to TwitterShare to FacebookShare to Pinterest
Labels: rumours