So, with the completion of the Dagr Ormr and the Hildasay PDF on the paint table, I have been thinking ahead a bit and how I can improve this list, as it's one of the few lists that can actually be improved. This is because most of the squads are short of men, with most of them being only 9 men strong and with only 2 special weapons each. Also, there are only 2 commanders and 2 command squads out of a max of three of each. The key question was, how do I expand the squads when Dreamforge Games stopped producing figures? Well, salvation came in the form of Wargames Atlantic and the re-release of the Dreamforge line 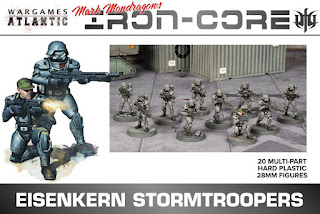 The only box currently available.
At present only the Eisenkern Stormtroopers are available, however, they have announced that the Eisenkern Panzerjagers (female warriors) are in the pipe line for release this year. As the boxes are 20 man boxes, just one box will be enough to expand our the special weapons, with 12 required, create a third command squad, with 4 models, and a commander, for a total of 17 models. The other 3 models can be used to add extra options for special weapons. Well I say 3 models but each 5 Man sprue in the stotroopers box, actually comes with 7 pairs of legs, so a total 28 legs. This means that I will need to find 8 bodies and packs, although at least 1 will be a vox caster, and I will have 11 spare bodies. Now currently there are no other options for the Militarum Tempestus in the Guard codex but I'm hopeful.we may get some extra options in the new version, maybe special weapons squads or maybe even sniper rifles. I would love heavy weapons and maybe even a fast option but I've gone over all that in other posts. So when the Panzerjagers are released, I will be getting a box to bulk out the force.

Another item I want to add to the force is transport and o don't really want the Taurox, not because I don't like it, even if it's is a bit of an odd design, it's more because I do t feel.that it fits the theme of my force. I have been looking around all.over the place to find a suitable replacement vehicle and I though I had found one with the Anvil Industries Taipan APC, but that project seems to have disappeared, and try as i.might, I can't find anything on it post 2017. So this has lead to a continued search that that lead to a few options but none have been either sensible in price, ie less than GW prices, and fit the aesthetic that I'm looking for. However, I came across this the other day and I think it has the potential to fit quite nicely, the Mantic Games Warpath Mule; 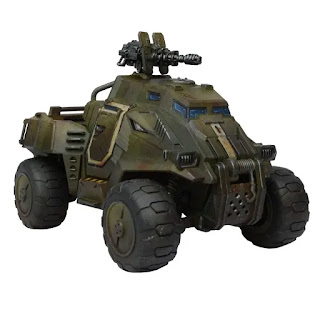 GCPS Mule
One addition benefit is that it comes in two forms, the GCPS Mule and also the Plague Mule, which is almost the same just a bit more battered and beaten on the front. 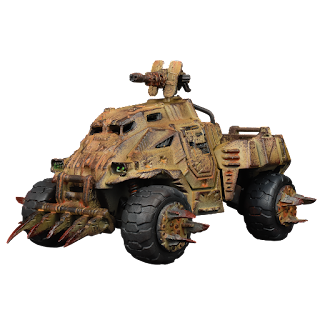 The plague mule version
The only issues are that it is open backed and armed with just a heavy weapon on top. In terms of size, well it's a pretty good fit for the Taurox, being a good fit in pretty much every direction.

The open rear can be dealt with easily enough, such as mini void shields or repulser fields. With scions having a 4+ save and Taurox having 3+ saves, it's not a stretch to think of the vehicle having something extra to boost the save of the passengers. I could form some sort of structure to the back with plastic but my modelling skill are not that good. In terms of turrets, there are several around on eBay and the like, so that's not a problem. The issue comes with mounting it to the vehicle, I think it could mount on the top, just in front of where the weapon mount is now. This will probably mean cutting in to the chassis or similar, either way I don't think it should be a problem. There are several options on eBay for mountings, so that's another option.
Either way I want to add 3 or 4 transports to the force for some mobile firepower. Ultimately I'm really waiting for the new codex to see what shiny new toys the codex brings.
Posted by Steve at 12:00:00