With the current tournament at the club, I've been looking back over my guard models and I've decided to go back and finish painting those last few models from the Hjaltland LI.  Progress has been slower than I would have liked and has come in fits and starts but we got there in the end.

There weren't many models, a couple of heavy weapons teams, some special weapons guardsmen, some ratlings and a couple of characters, 32 in total but not all of them needed completely painting from scratch. All but 2 were primed and several had been started in one form or another. Only one model needed stripping and repainting and that was the Lord Commissar. I'll apologise for the poor photography but I'm still stuck in bed with my leg and using my phone the best I can but the light is really poor. 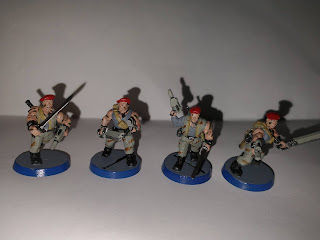 First up are the command squad. These guys are joining Blue Troop, the veteran troop, to form a small core of fighters to support and act as a small counter strike force for the Veterans as they go forwards. All are armed with pistols and chain swords for this purpose. While they aren't really a hardcore combat unit, they can put out a few attacks and do some damage. I do still wish that command squad had slightly better stat line, mainly 2 attacks, like a vet Sgt, as these guys are supposed to be the the best Guardsmen, so having 2 attacks base seems reasonable. 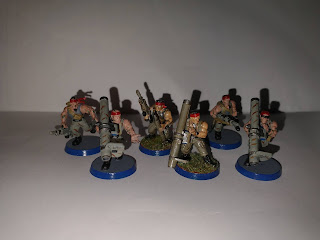 Next up is the expanded missile teams. There are 2 more teams to add to the original, to form a complete heavy weapons squad of 3 missile launchers. These we'll add a bit of extra punch, both to anti-armour and anti-infantry. If they bring the psychic awakening stratagems into the main codex then these guys are going to be even better. 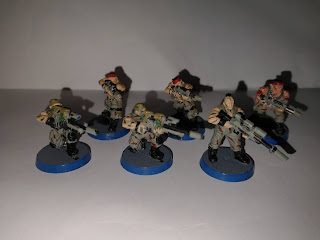 The last of "Blue" platoon are the sniper special weapons squad. These guys are a bit, well pointless really. Sniper rifles are not great and 3 on guardsmen are  even worse. However, I have the models, 2 of which are old metal models, so why not. I've spent quite a bit of time on the paint job for these guys, just to make the "stand out".  I doubt these guys will see the table much but they will look cool 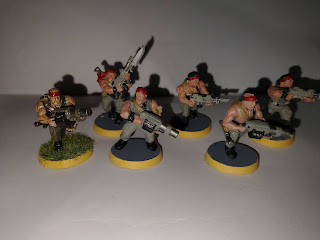 The last squad is Yellow platoons grenade special weapons squad. This squad is just to provide some additional counter punch fire power and some light anti-armour capability to the Yellow (Assault) Platoon. I know grenade launchers aren't the most powerful weapons but they are still better than flamers.

Next up are the Psykers or rather they would be, if I could remember where I put them! While I already have 2 and don't actually need any more that that. I decided that this was a good opportunity to add a few more, just because.... Anyway, blue and green will join black and red to form the psychic quartet (when I find them). 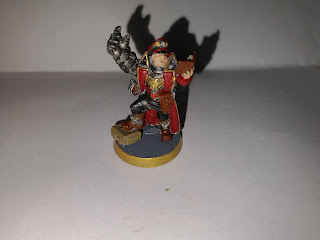 Lastly we have the Lord Commissar. This model is a great old model, probably o e of my favorite metal models. While a lot of the models now looks very clunky and are posed rather silly, some, like this one, are full of character and have a very dynamic pose. You can just tell this guy is exalting the name of the Emperor to the troops, either that or reminding them what he'll do if they fail! 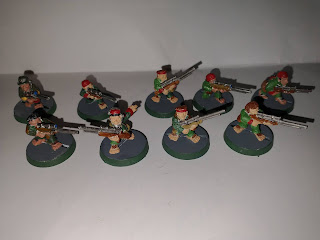 In addition I have painted up some Ratings, although I'm not sure these will be joining the Hjaltland LI or one of the other forces.