After playing a few games with my son a few weeks ago, before I broke my let, I decided it was time to actually paint up some of my terrain. The majority of my terrain in MDF buildings and will really require spraying up with rattle cans, which I have in the garage. I think I showed a couple of test buildings a while ago. For the recent games however, I have been using some.more industrial prices, as we're only playing 500 point games and infantry models only, so no requirement to have big line of sight blocking terrain. 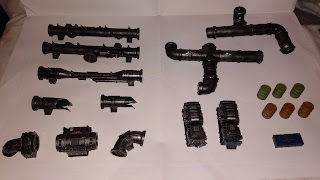 As you can see, I've kept most of it fairly basic. The majority of it is just black primer with various layers of silver dry brush to build up some of the details. It's all fairly quick and basic but should be more than sufficient to create a good looking battle field devoid of grey plastic. 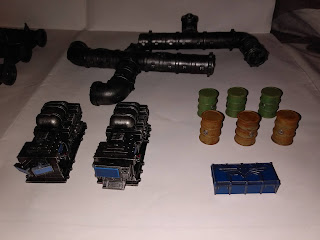 The pipes are from two sets, the main ones, shown below, are from the GW Promethium Pipe Relay. The others, at the back of the picture above, are from a Mantic Terrain Crate, specifically the Industrial Accessories set. 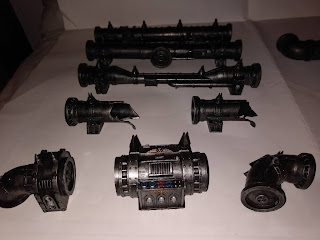 Barrels, every battle field needs some barrels. These have been painted to give them a weathered effect, which I think works quite well. 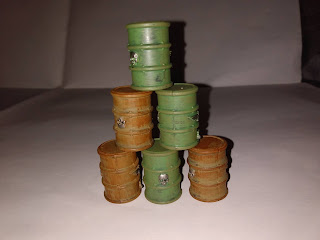 A crate. Now I should have a few more of these somewhere but they seem to have gone wallies. I think I should have at least 4 big and 4 small crates but this is the only one I can find right now. When I find the others they will be painted up.in a similar fashion to this one, although in different colours for some variety. 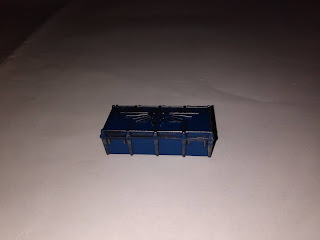 Some power generators from the terrain crate, again just dry brushed up. I spent a little extra time on the screens to give the pieces some extra detail and help them pop a little more on the table. I quite like how the screens have turned out. 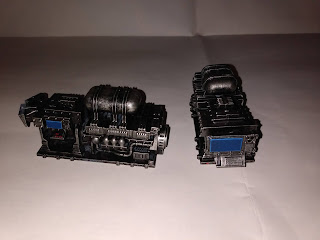 The pieces are incomplete, however I painted them up anyway. They need some sort of mountings, as the two pieces top left are actually angled. I will build this as some sort of loading system and make the gap under the tracks solid to add some more line of sight blocking terrain. I've got some ideas and items in my eBay watched list to build this, so we'll see if I can get it done. 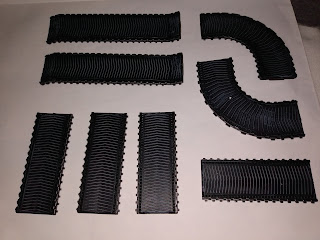 Containers, where would we be without containers. These are my two GW ones, one with a silver finish and one with a gold finish. Again there were dry brushed and it's really obvious on the pictures the bits that I've missed, such as the bolter mounts and the bits in-between the 'legs' on the bottom. Oh well, I'm sure I'll fix them at some point. 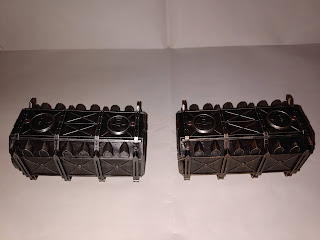 I plan on adding some more containers to the mix and have some in eBay that I'm looking at getting. If I get these, I would have 6 containers, which should be enough to give me a good amount of big blocking terrain if I need it. 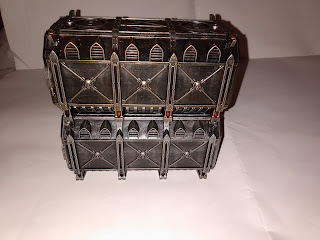 My old Aegis Defence Line is also in the box now. With them not havi g any meaningful rules in the game now, there is little.point in me taking it as an actual fortification but it works well as scatter terrain. 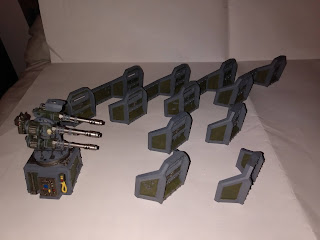 The complete collection in its storage box. As you can see there is still plenty of space in there for additional terrain. The pieces in the bottom left form a small pipe network, which I may well build if I have bits left over from building the loading systems, otherwise they may just be added as features to those pieces. 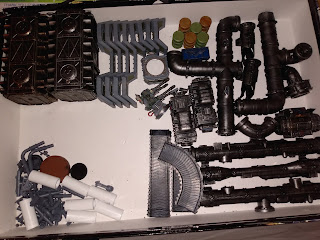 I plan on gathering enough terrain to fill this box and no more, making it easy to transport and store. I can combine this with my other terrain should I need some bigger pieces.