So on the final day of Warhammer Fest 2021 online and we had a huge, huge guard update! Ok, so maybe not that huge, but it is big, for a couple of reasons.

We had a reveal earlier in the week, on Wednesday, of some updated Gaunts Ghosts. Now, this was nice but rather limited. Six special characters, probably running as commissar, company commander, platoon commander and some other types of characters, all with fixed profiles is a nice little release but not really useful for building an army.

Now, the sculpts themselves are amazing, full of detail and, well, character. I really do like them and they continue with the recent guard character releases in really bringing up the guard sculpts several notches. A full army of these sculpts would be amazing to see but probably mean that you have the same 10 man squad repeated 10 times over.

As nice as the Ghosts are, the really exciting thing was the new for the Cadians. While this isn't quite as good as a whole new sculpt, it is really good and a giant step in the right direction.

So what are we getting? Well, as you can see from the image above, were finally getting female guard! Not only this but special weapons in the standard troops box. No more having to buy a command squads box to get the bits we need. There are already quite a few heads in the Cadian box, 14 if my count is correct and this new sprue seems to have another 25 different heads, giving a grand total of 39 heads, with 32 different styles for a 10 man box set! That's a lot of heads! This is actually really great news, as it means that there can now be even more variety for the troops and it will be nigh on impossible for two people to build repetitive models. The fact that some of the heads are female, 8 or 9 by the looks of it, is also great and really brings the full imagery of the guard to life on the tabletop. 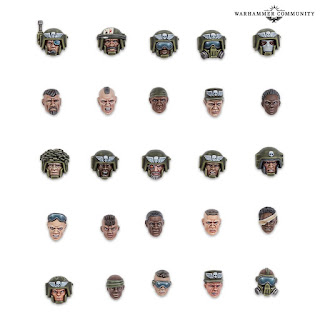 The addition of the special weapons sprue is great as well. With the standard pack only having a flamer and grenade launcher, we had to buy the command squad box to get the other options. 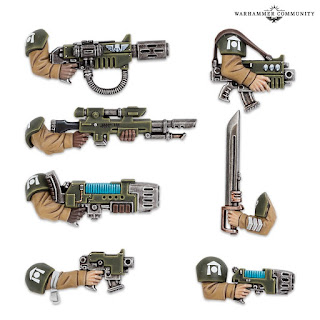 However, there is a downside to all this. No new models. It looks like we are stuck with the same base models with just the two new upgrade sprues. While this is fine for Cadians, it doesn't work for Catachans quite as well. Yes, we can get the special weapons and new heads but they would be all male. For female Catachans we need a while new box and we know they can do female Catachans pretty well, as seen with Ripper Jackson, which is a beautiful sculpt. 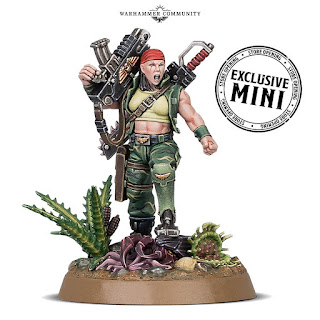 This upgrade sprue does give me some hope though, as there are a few options for this sort of thing and there are a few regiments that can be formed by simple changes to head dress and weapon arms. Things like the Ventrillian nobles,the Mordian Iron guard or Tallarn desert raiders could be formed from the base Cadian kits with a head sprue and weapons sprue with several lasgun arms in addition to the special weapons. A second kit with long coats and similar upgrade sprues could be used to make Valhallan ice warriors, death corps of kreig, Armageddon steel legionand savlar chem dogs. Yes, this leave the Catachans a out, but Cadians with the right arms and heads would make a suitable stand in. 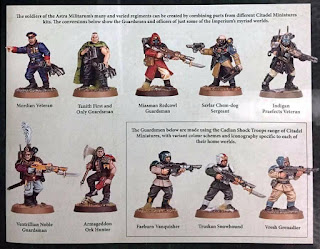 I know that it does strip some of the variety from the units but would give us the individuality we all want to see from the GW line. I would love to return to the glory days when we had boxes for each individual regiment but let's face it, were not going to get that again.