So, it's taken a while and there have been some stops and starts, I have the majority of my Eagle Knights Elites slots painted up. I say the majority, as I am still ummm-ing and arrrr-ing about how to attach the wings, once I do decide how I'm going to do it I will post it up here (and yes, I am aware that the Libby is actually an HQ selection, he's just been dumped in with all the other models here)

Anyway, here are the completed models! 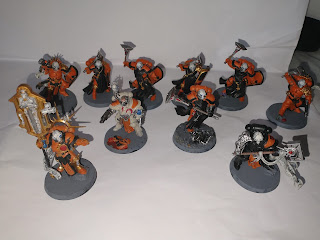 Family photo to start
First up are all the characters, the Bladeguard Ancient, Apothecary, Judicar and Chaplain. 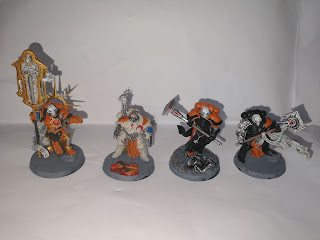 The four completed characters
The Chaplain is probably my favourite character out of the ones here. This is due to his cloak thing, its not actually a cloak but more of a collection on Oaths that he has attached to himself, for his benefit but also others, sort of like a handy cheat sheet of the most prominent and important oaths a space marine should know. When he is based up properly with the grass, it will show up the rock that he is standing on and give him even more of an air of authority and presence. 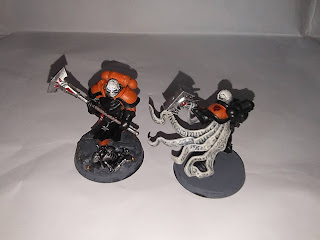 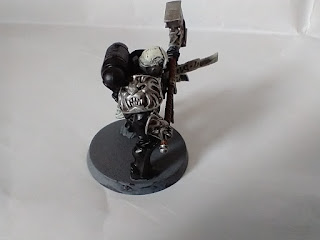 Details on the right arm, which came out really well and I'm quite proud of these.
Next up are the Bladeguard and Apothecary, complete with dead Knight. Only minor conversion work done of both of these characters but I think that they work really well and fit with the rest of the force. The one divergence from the overall force also happens there, as all of the Sigmarines have skull helmets, to represent the fact that they are all sworn to the Chaplaincy and death but not the Apothecary. He has a bare face with mask, for although he is fielded with the force and wears the same decorated armour he is not sworn to the chaplaincy but is still part of the Apothecarion and is gifted the armour by the Chaplaincy out of honour. 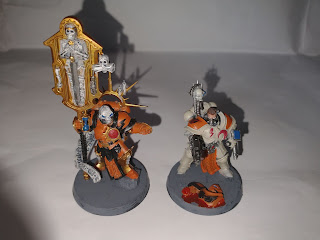 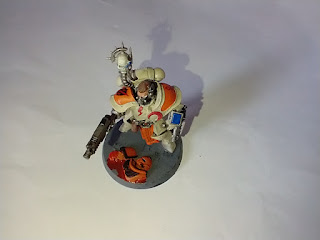 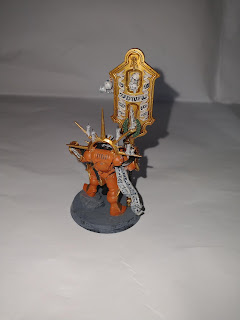 Ornate backpack of the Ancient and backside of his Standard
Next we have the main bulk of the force, the actual Bladeguard, all 6 of them. Now I have modelled these so that I can field them in one of two ways, firstly as a squad of 6, that can be combat squadded in to two units of 3, or two separate squads of 3. This is due, mostly out of luck, to having two figures with pistols out and mounting extra details on their packs, basically smaller versions of the Ancients. 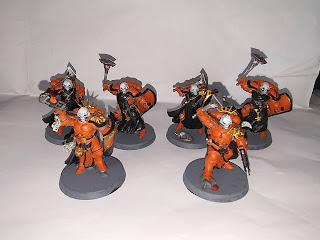 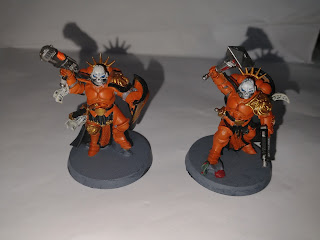 The 2 Sergeants. The one on the left is the main one, as he is carrying a plasma pistol and only the actual Sgt in a 6 man squad can carry a plasma pistol. 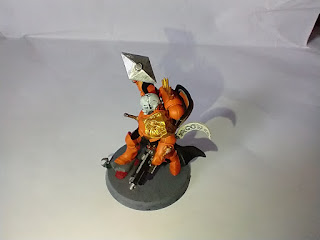 Shoulder detail, not a good as the Chaplain but not to bad. This is actually not the best but was the one I could get the best picture of. 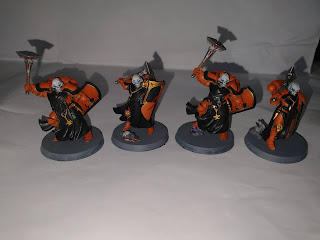 The four remaining members.
One thing that you may notice is that two of the models do not have gold shoulder pads. I has come up with a explanation for this, these are new inductees in to the order and have yet to be fully "blooded" by the order and thus receive their golden pauldrons. 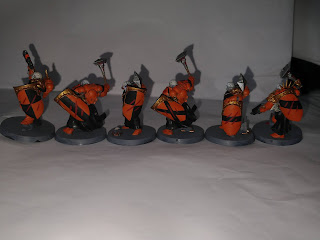 The shields
One extra little detail that I did for these models was to give each an individual shield. The guys are supposed to be quite rare on the battle field and so i figured that they would want some way of identifying each other and also being identified by others and what is more obvious and easy than the shield. Nothing fancy and sticking with the chapter colours and basic shield heraldry.