While I've been working on the Eagle Knights and Terrain recently, I found some time to finish off some of the Hrossey Yeomanry vehicles that were in one of my KR cases with the the Dagr Ormr. These consisted of 3 sentinels and a Chimera and Leman Russ hull.

First up the three sentinels. I've tried to give these each a different personality and paint job, and yes, I know that two of the legs are on backwards but in my defense, I brought them second hand. 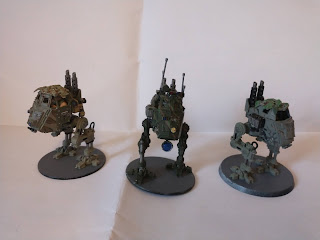 The three sentinels
The first one has a relatively basic camo pattern on it, with a camo net on the top. 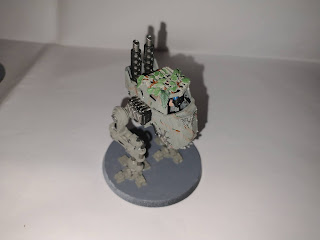 The second has a more complex pattern, with a larger pattern of camo on it. It also has a camo.net across the top, although this one is a bit more subtle. 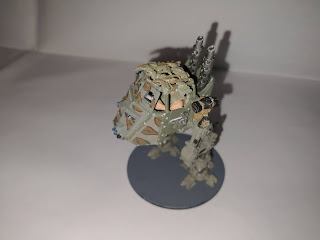 Lastly we have the command sentinel. This one has a darker paint scheme with a "tiger stripes" type of pattern across its surfaces. The vehicle also has a sensor array on its roof, which is purely visual but emphasizes the command role that the vehicle plays. 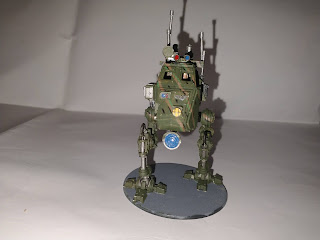 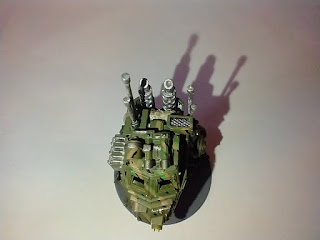 Sensor array
These are the first vehicles that I have finished for the Hrossey Yeomanry, although their weapons still need painting. I hope to get a few more finished soon.
Next up are the hills of a Chimera and Leman Russ. It's only the hulls at present as the turrets are packed away in a different box, with the rest of the vehicles.
First up the Chimera. There isn't much to say about this other than to note the missing lasguns on the rear of the hull. This is because I built this back in 7th when you could fire weapons out of the hull, so they were acting as firing ports rather than as they lasgun array they do today. I'm sure I have all the bits somewhere but the back door is sealed shut, so it will take a bit of effort to crack it open and get them in. 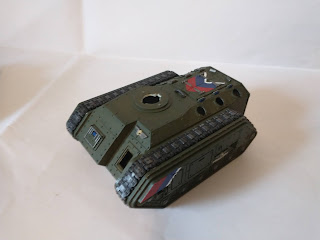 Hull with regimental markings.
The Leman Russ hull, again just painted up ready to receive the turret and hull weapons. 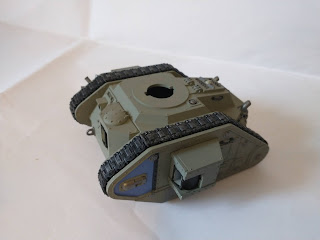 I'm hoping to get the final box of models down soon, bit it's quite a big box and it's up high, so my wife struggles to get it down. Hopefully by the time you read this I'll be out of plaster and back on my feet properly and be able to get it down.