I had a quick game of kill team with my son the other week, using the terrain that just painted up and his newly painted Necrons. We didn't use one of the red boards from the new starter sets, as they are up high and when we played this game I was still in a cast for my broken leg and unable to climb up to get it. Even so the painted terrain still looked good on the Infinity board we were using. This game did highlight why I need to grab some more terrain, as it looked fairly sparse even on just a single board. Granted, what looks sparse for kill team is different to 40k, it definitely makes me realise I need more. 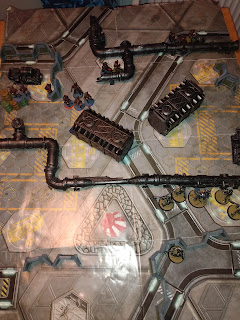 As it turned out, I played Necrons and so decided to go for a fairly underpowered list compared to the Scions I was facing. This is partly due to the models that are available to the Necrons at the moment and partly as I wanted to give my son something he could actually beat. 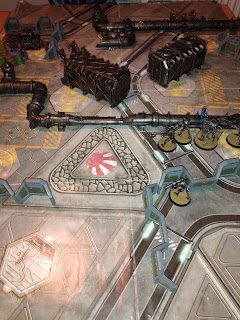 I know that there are really two schools of thought about this sort of thing, either "play as you would normally and they will have to learn to loose" or "go easy on them and let them win". I generally go for the second option, I don't always make it easy and have won on a number of occasions but I never play to trounce him, which I could if I played properly. It's not that I'm a good player, I've just got 20+ years extra experience with this sort of stuff. I have no doubt that in a proper competitive environment I would struggle to hold my own, even with a top tier team, but against my son I think I should be able to win very easily. 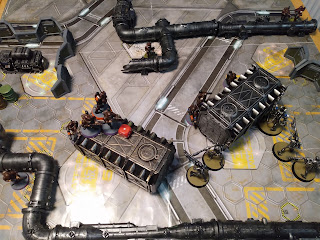 Anyway, the game was pretty close up until the last turn when I got surrounded and lost 3 warriors in quick succession. We were playing with commanders so I was at a bit of a disadvantage as my commander was significantly more expensive then the Scions Tempestor Prime I was facing. In the end I had just my commander, an Overlord against 8 or so scions, including one plasma and one volley gun. Hopefully soon we'll be able to get a combat patrol game with the new terrain and see what it all looks like.