I had been holding to move on with painting my guard armies but the rest of the models are packed away up high, under a number of other boxes and models, meaning my wife can't really get them down (she over s foot shorter than me and my storage arrangements weren't constructed with her in mind!)

So, I have had to channel my efforts in other, more accessible directions, which basically means my Eagle Knight elites. I've shown these guys off before but there here again to show them fully assembled, with their eBay packs and Zinge Industries skull heads. 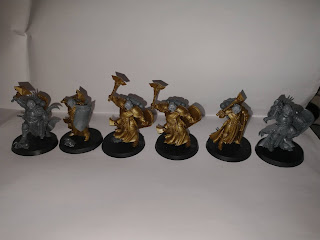 Blade Guard
First the Blade Guard and there are now 6! I made a mistake before as I thought that the max squad size was 5 but it's 5 plus the Sgt, so I built another. I built him with shield slung and pistol out, so i can run him as a second Sgt if I want two 3 man squads. The was some.minor conversion work on his weapons but nothing hard. 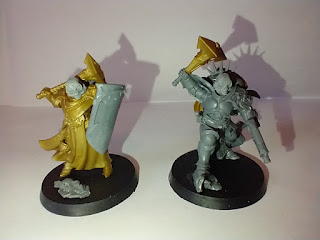 "Female" Blade Guard and 2nd Sgt.
One issue I have with these models is with the "female" models. In AoS, there are both male and female Stormcast, bit in the 41st (or rather 42nd) millennium, there are only male marines. (Now I don't want to get in to the whole female marine thing, the lore says no, so it's a no for me. Why they couldn't work it in when Primaris were introduced, I don't know, but for now, no female marines.) However, a couple of the easy build models are female and their proportions are not the same as the male models and the heads look a little off scale, as shown by the left model above. I'm hoping it will be less noticeable once there painted up and on the tabletop. 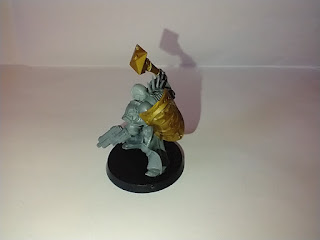 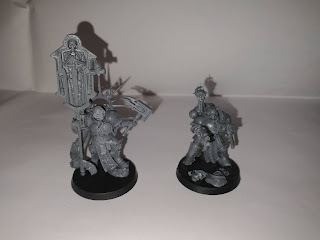 Ancient and Apothecary
While this model still needs a bit of work, although I've since trimmed the hammer off, I really love the pack I built. The bit on the top of the pack was originally on top of the standard but I think it looks rather good on top of the pack, giving him a more ancient and holy standing I think. 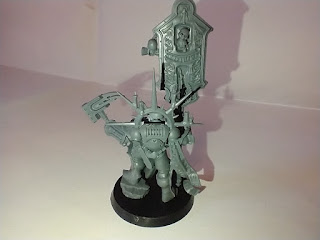 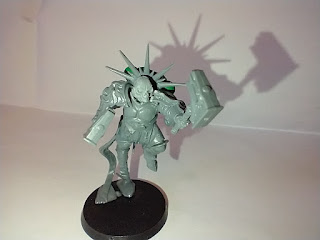 Libby, minus wings
The Libby still hasn't got his wings, mostly as I really have no idea how I'm going to attach them yet. I think I might end up leaving this model until last. 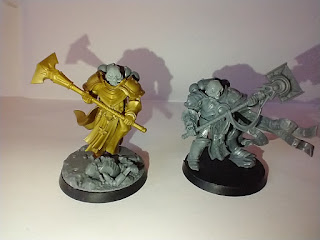 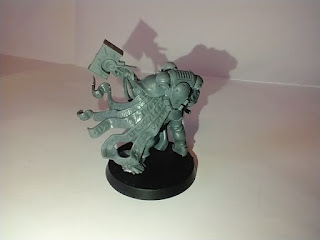 The Chaplain has turned into one of my favourite models, with the fitting of the scroll work flowing from his pack. I think it gives him a lot of purpose, I can just imaging him standing on little hill or something, shouting to the assembled masses, oaths streaming in the wind. 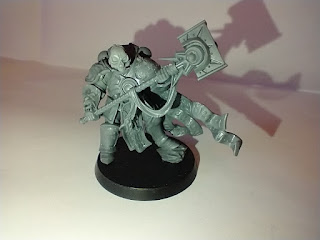 I have to build a back story for these guys, but the Knights have Warrior lodge type groups within them, although the Knights are based on role and ability. The two main halls, as they are called, were the Hawk Brethren and Eagle Talons, or sternguard and Vanguard vets. This will change with the Primaris, with the Brethren becoming the main hall and also being tied to the Chaplaincy. The lore will run somewhere along the lines that those who enter the hall pledge to the Chaplain a death oath, take up the skull helmet and fight to the last for the honour of the chapter. They can rise in rank through the Chaplaincy but give up thoughts of command.

I'll flesh out the lore further when I rewrite the chapters lore but for now it's a good start.