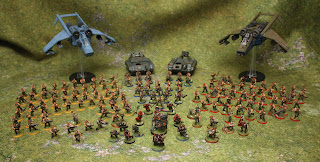 The Hjaltland Light Infantry was my first completed army and has probably been the most used force over the last few years. Now, there is a slight caveat to this post, the guard codex is not out for general release yet and I don't have a copy, so I'm going on what information I have gleaned from leaks, YouTube and various other content sites and so some.of it may not be correct.

Officer of the Fleet

All for a grand total of around 2227pts. So what's the problem? Well quite a bit actually. We'll start with the command elements, the company and platoon commanders with the command squads.

Currently there are three Company Commanders and two Platoon Commanders but only two command squads, one with the full works (Heavy flamer, Medi-pack, Regimental Standard, Vox-caster) and one loaded with specials (4x Plasma guns). So, I will now have 5 commanders but only 1 legal command squad. This poses a big problem, as I don't really want 4 castellans roaming the battle field, ideally I only want one, so I need to form at least 3 more command squads.

One option would be to add the three grenade launchers in to three of the infantry squads with flamers using the new Cadian rules, which would only leave 12 guardsmen (the 9 from the special weapons squads and 3 from being replaced by the grenade launchers) which is not a big problem, as I'll come to in a bit.

But first let's take a little step back to the command squads, as I also have an officer of the fleet and master of ordnance in the list, as well as a ogryn bodyguard, all of which will now be attached to the original command squads with standard et al.

The last couple of HQ units in the original list were the Primaris psykers and lord commissar. The lord commissar is easy, he just drops back down to a regular commissar and carries on doing the emperor's work. The primaris psykers, are as far as I know, still in the book and so will continue as they were, although I'm unsure as to whether they are still HQ units or not.

The last unit in the list that is a problem is the veterans. These guys are no longer in the codex and with 3 melta guns and a heavy flamer are not able to be swapped to.anything else. The heavy flamers could be put in to one of the command squads, which by my reckoning leaves me with a total of 19 guardsmen and 7 special weapons (3 melta and 4 plasma). This means that I could form 2 more Cadian style infantry squads, leaving me with just 3 special weapons, a melta and two plasma, and 3 guardsmen. Which isn't too bad, although it does mean that I've lot a significant amount of high end firepower, with the loss of the vets and plasma command.

The rest list will continue as is, with the exception of the Wyverns. The general plan for this list has always been an infantry based army and the Wyverns were the only exception to this (apart from the flyers) and I have often thought about replacing them but didn't really have anything to replace them with. However with the new Field Ordinance Batteries I think I have. I would like to get at least 2 units, one with the missile pods and one with the field gun, which would give a drop in overall shots, would actually increase firepower. The possibility of a third unit with the lascannons to bolster the anti-tank firepower is also an option.

So there will be quite a few changes to this list overall and I think that it may not be quite as good a list as it was. I know 9t has never really been a highly optimised list but it functioned will and the various units had their roles, now that has been slightly diluted and some of the units are going to have to multitask, which isn't great but I think it should still work.