The new guard, definitely not the same as the old! 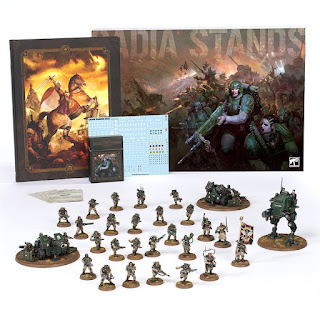 So the new guard codex is sort of here, I mean it is here, it's just not here for everyone yet. I'm not going to go off on a rant about how I don't like the format of special boxsets and early issue codices, as that's a whole post in itself. What I am going to write a out is my first impressions of the codex on to my own forces and how it's going to impact them in general terms and then I'll go into more details over the next few post on each individual army list and talk about how they are each going to have to change and evolve.

Now, a quick recap, I have three main army lists, my Hjaltland Light Infantry, Hrossey Mechanised Yeomanry and Dagr Ormr Militarum Tempestus strike force. All these forces are formed differently and have a different method of waging war, however, there are a number of units that are shared across the forces.

The main unit that can be found in all three are the veterans. With the disappearance of this unit from the codex there is a whole in all the lists, although they for filled different roles in each list, from specialist tank and monster hunting units through to basic protection and blocking troops. For two of the lists, the yeomanry and scions, these forces can be switched across to one of the various new infantry options, the Hjaltland LI are a little harder to deal with as they had a very specific roll that can no longer be done by any squad apart from a full 10 man Scion squad maybe.

This issue with the veterans in compounded, especially for the Hjaltland LI, by the changes to the command squads. Previously these had been either fully fluffy units with all the options or very specialised units with special weapons. Now, with the restrictions to the special weapons, a lot of these units are now out the window. For the Hjaltland LI the melta armed vets were supposed by a plasma armed command squad, forming a potent strike force dropping out of Valkyries. Now I'm really going to have to have a retying about how to form a tank and monster hunting party in the Hjaltland force but also how to form counter punch and specialist units in the others as well.

The third biggest challenge is the loss of conscripts, although this really only affects the Dagr Ormr scions, as I was planning of running several squads to act as an screen and base line to support the scions when they dropped in. I will now have to look at what options I have available from the four infantry options instead, although this is likely to drop the overall number of troops by half. The change to scions, from troops to elite is actually not much of a problem, as they were being run in a separate detachment anyway and so will be able to stay as they are, which is helpful.

One other change that is going to affect me but in a lesser sense, is the loss of special weapons squads. Now, I have several of these built but I rarely use them, usually defaulting to command squads, due to bs3+ and having 4 weapons. The fact that I have about 7 or 8 of these squads spread across my three armies means that I now have a significant amount 9f special weapons that will need a home.

There are a couple of other issues that I will need to work around, such as commanders without command squads and the scions special weapons loadouts but these should be solvable. I'll go in to more details with the Hjaltland light Infantry and the issues and possible solutions.