Evolution of an army - Deathwatch

This is a wander through the process of building my Deathwatch army, as despite putting all my first born marines in to hibernation, I seem to have ended up with a 2000 point army of first born Deathwatch.
The story starts where many good stories start, the "for sale" section. Someone at the club was selling half of the Deathwatch Death Masque boxset, the Deathwatch half obviously. The original intent was to just build a kill team with some spare options, however, things kind of got out of hand! 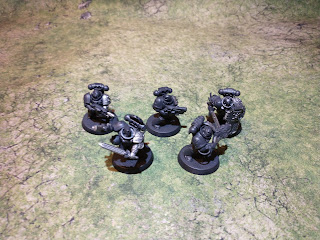 Although there is only 5 models here, I think I actually built 6 models. The Death Masque box came with 5 marines and Artemis. I'm pretty sure the other guy I built was a infurnus heavy bolter. I built these to fill out the requirement of a kill team from the 2018 rules. 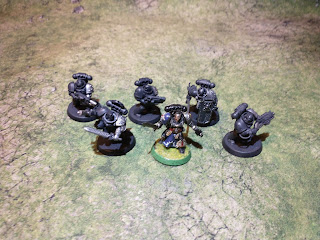 I added the psyker next, I don't remember where I got this model but it came fully painted and based, ready to play. 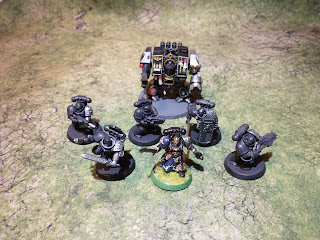 Next up I added the dread, mostly at the insistence of my little one. I've painted up all three options for his weapon arm, with plasma, lascannon and assault cannon. Luckily there was no need to magnetise anything as there is a peg that sticks out that the arm just push fits on to. 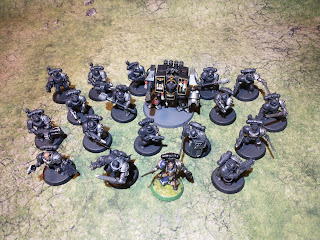 Three marines missing, infurnus heavy bolter, bolter marine and a blackshield with storm shield
Once I had done all that I was left with loads of parts, which seemed a waste to me, so I decided to use up a bunch of bodies that I had lying around from the Betrayal of Calth box. Using these bodies and adding in all the various bits and pieces I managed to make up a number of extra bodies, for a total of 21 (including the Libby). An at this point I thought I was done. 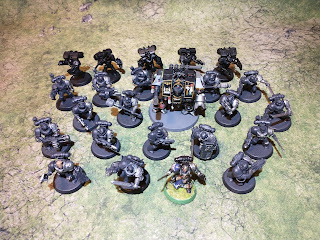 And then came the Kill Team: Elites expansion and so I dug back in to the bits box and pulled out the vanguard vets that also came with the Death Masque box and put together 5 vanguard vets to fill out the elite slots that were now available in the game. And then i was certain i was done. 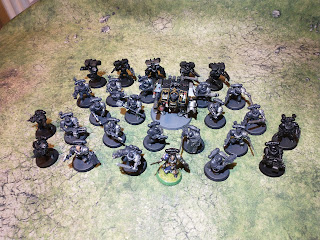 a couple of guys missing here, another heavy bolter and a marine
The thing is when you have little ones (or not so little ones at this point!), they sometimes want to join in the hobby. So I had a few spare bits lying around and my eldest wanted to build some models, so I game him the bits he wanted and let him get on with it. Later he decides he actually want Tau and so the marines he build are now surplus to requirements, and with no where else for them to go, they get folded in to the Deathwatch, adding half a dozen of so extra guys. 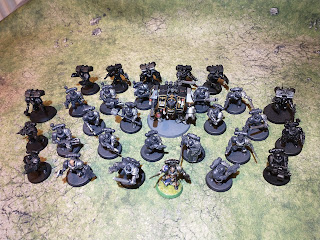 It's at this point that I looked at the force and thought, I've quite a little force here and I could probably put together a nice little 500 point force or so for 40k but I've only one real HQ. So a rummage though the bits box and 8 bash together a Lieutenant and Captain with jump packs. 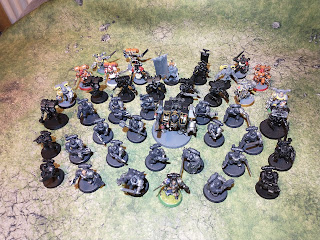 Then you remember you  had a reshuffle of your kill Teams a while back and there's a bunch of models without a home at the moment, so you fold them in as well. This however means a little bit of a reshuffle is needed within the Deathwatch and you realise that there are a couple of extra models that are missing from the collection and could be useful, so you raid the bits box again and build an ancient and champion to fill out a full command squad.
So that brings you up to 48 models total and 1988 points. Bu wait! When reading the codex you realise that you can take a squad of terminators with mixed assault and ranged weapons and you have 5 termies laying around from an old kill team. Now technically these are actually part of the old Dark Guardians army and so are only on loan until I get around to digging that army out of storage and finishing it off, but that might be a while at this rate!
So there it is, going from a small 6 man kill team force to a fully fledged 2000 plus points (2170points) army, with out any real plan. Now some.may have noticed that there are some non black models in the pictures and these will remain painted in their original colours and I will fudge together some form of lore to allow them to be there, something like them being there at the direct request of the inquisitor.
Posted by Steve at 12:00:00