This is the first of a few Xenos and chaos forces that I will be building just to have some enemy forces in my collection, should I ever needs some. Most of these forces will be quick and dirty paint jobs, full of proxies to get the job done. This lot are a stand if for the Thousand Sons Warpcoven Kill Team, formed of 3 sorcerer's and 6 Tzaangors or in this case chaos cultist proxies. 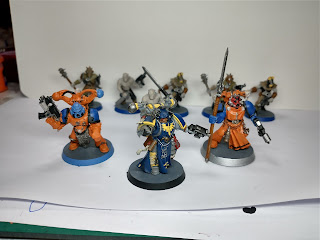 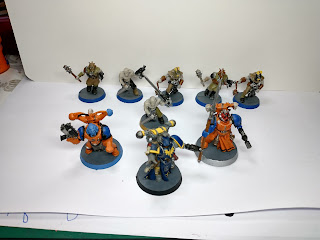 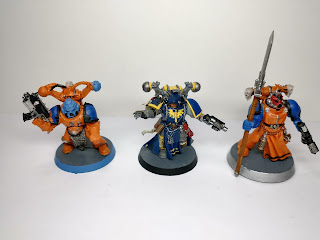 The three sorcerer's are pulled from my collection of first born space marines, all of which were painted for various other projects but have been pulled together to form this kill team. The center model is the only actual sorcerer type model, being a space marine librarian, the others are conversions from the bits box. 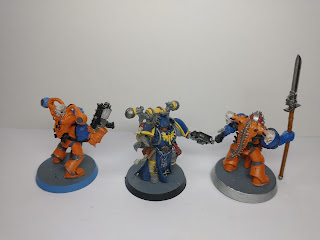 Hard to see but there is actually some Nurgle mutations on the left hand model between the weapon and the shoulder pad, as this model started life as an old school metal Nurgle plague marine, his backpack still bares the remains of the 3 ringed symbol, now reduced to 3 black dots. 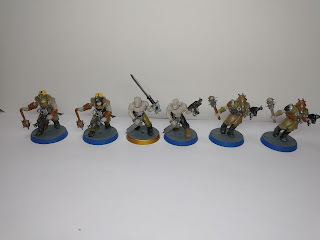 The Tzaangors are played by the cultists, 5 standard Tzaangors with pistols and chain swords and Champion with great blades. 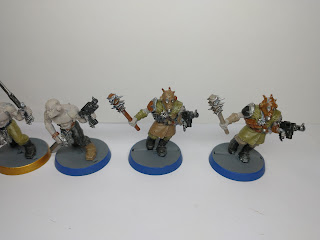 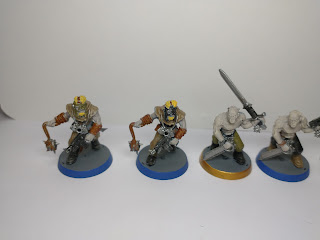 2 standard Tzaangors and champion (with gold base)
Now, there is a little problem with the wanna be Tzaangors, the cultist are on just 25mm bases and Tzaangors actually come on 32mm bases, plus they are a bit taller. Now I could get around this by debasing them or even just sticking the current bases straight on to the bigger bases, to give some extra height as well but to be honest, when these come out to play it will be in the company of friends and for very casual games, so I don't think that the difference in base and model size will matter at all. If it changes that I probably will.just stick them on top of the bigger bases and be done with it.
The next Xenos team to get a quick job done will be some more cultists repurposed as GSC.