As usual I'm a couple of days behind most people out there when it comes to putting pen to paper and getting my thoughts out there on the interwebs. This information comes direct from GW community page and has been discussed widely already and there have been some pretty strong opinions but as usual m, quite a few people have missed one key point. These changes only take effect with the latest warzone book, in this case Nephilim. For those of us not using this book, these changes have zero effect. 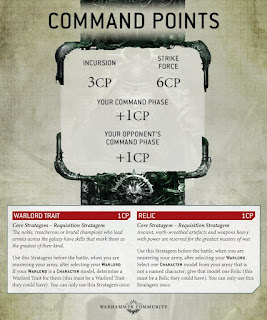 The first change that was announced a while ago was the change to command points. Not command points have always been something of a sore point for me. While I agree the old system was a bit broken, with the likes of the "Loyal 32", the new system is not much better for the guard. Typically we have significantly more units than most armies and therefore need more CP to buff an equivalent percentage of our forces, the new system hamstrung us a little and now the new system does so even more. With the addition of having to pay for warlord traits and relics as well, we are not severally behind the curve. Hopefully when our new codex comes out we will have some new tricks that mean we can compete on a more level playing field but at the moment these changes don't help us at all.
Both of our competitive builds at the moment require significant CP input before the games, either with upgrading white shields or with tank aces and relics, both of which would mean we would be starting on very little, if any, CP. 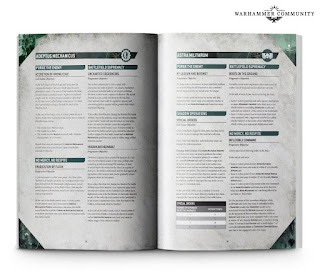 The other change is the secondary objective options and we now have access to 4 new secondaries. However, it's not all good news. Of the 4 only 1 or 2 are actually useful.
By lasgun and bayonet is not great as scoring it requires you to kill units on objectives, doing this a few times in a game should be easy but 15 times is significantly harder, so not a great option.
Special orders is a better option, especially for missions with a number of midfield objectives. Getting a unit on an objective and near an officer should be relatively easy for most guard armies and completing in in a turn also means you don't have to survive a turn in the open. This is going to be very mission dependant but you should be able to grab a couple during the game and bag yourself 10 point of so.
Boots on the ground is probably the easiest one to score points with. Getting units in to table quarters should be fairly easy, it's whether you have enough to keep it up for the whole game. With gaining one point per quarter per turn, you should be able to score 10 plus points a game with your infantry. The second half of the secondary is a little harder, getting a regimental standard in the centre can be harder. For this one you might be able to manage it for a couple of turns, as long as your not in the open. Realistically I think this is the one that will net the most amount of points regularly over the course of the games.
Inflexible command is our last option and has the possibility to score highly but requires a lot of thinking and could well comprises your match to achieve. Having to maintain all your troops withing 6 inches of an officer or all your vehicle's within 12 of a tank commander could result in you bunching up your units and not being able to move out properly. Yes, if you've vox casters it pushes the range to 24 inches for infantry but even so it's still going to restrict you somewhat. The last part, destroying an enemy unit whilst under an order is fairly easy these days with the way orders now work and should net you a few points over the game. This is not the worst option here (that's By lasgun and bayonet in case you hadn't guessed) but it's not the best either.
Overall, these are these changes are not really going to affect me much. The command point changes will have no effect on me at all, as I don't plan on playing any of the new missions and the new secondaries won't effect me much as, due to lack of play time, I don't have any set secondaries or preferred ones, so it's not like I now can't take the ones I want.

Email ThisBlogThis!Share to TwitterShare to FacebookShare to Pinterest
Labels: bit and pieces, gaming