After posting up about the quickshade, I though I would post up a little bit about how I based my models. It's not the most comprehensive guide to basing and probably isn't the best but it works and I did watch a few youtYou videos before I started, well after I had done a couple of models, which didn't turn out quite sparsely based with the flock.

The plan was simple, lay down a brown base paint, to give it an earthly look, although I think that a gray might have suited the battle mat better and is something I may try with my marines. 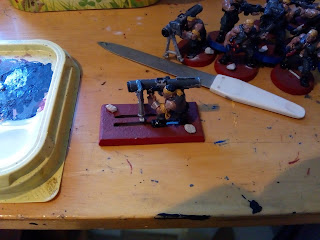 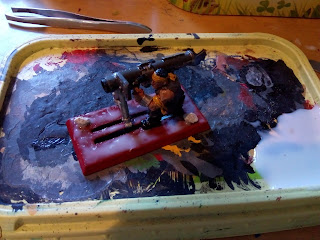 The base covered in PVA glue. I used a slightly watered down mix. I don't know the exact ratio as I just added some water, pretty much at random to the small batch of PVA I was working with. I was as careful as I could be to not get any on the model itself or the rim of the base, however I wasn't that successful at times and so some remedial work was required on some models. 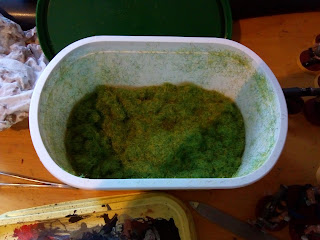 The basing flock, field grass from army Painter, decanted in to an old butter tub to give some space for working. 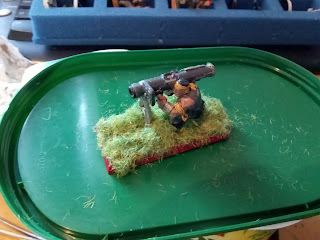 The base loaded with flock. I dumped a load on to the base and gave it a little press down to help the flock to stock. 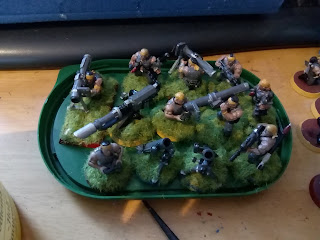 I did small batches at a time, basically as many as I could fit on to the lid of the butter tub. I could have done more by just putting them on the desk but I didn't want to waste to much of the flock, as with the bases loaded right up like this, some tended to fall off everything a model was moved or a neighboring one moved. 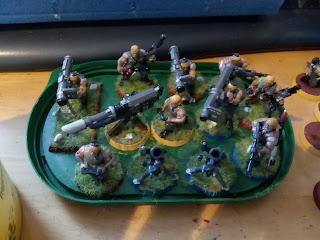 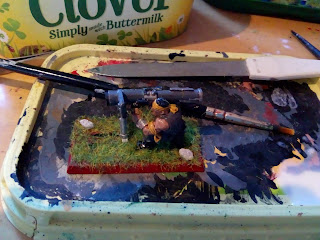 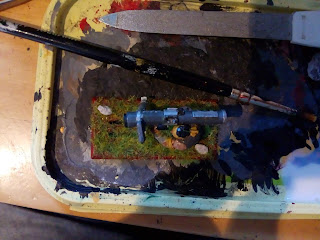 You can probably see the base through the flock on the front of the base. This seems to happen occasionally, where for some reason the flock doesn't stick as thickly as I would like. This is one of the reasons for thinking about switching to a grey base for the marines, as the mat itself has a more grey colour to it. 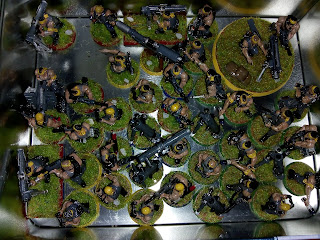 Here you can see a large majority of the Hildasay PDF, all based and ready for action. It really does surprise me how much of a difference basing up models makes. In the past, I had always though that yes it looks pretty and all but was it really worth all the extra effort when it doesn't really affect the model. Well, having spent some time doing it, the answer is most definitely yes, it does make a difference. It really does finish off the model and even with the basic basing that I have been doing here, it does really finish the models off. 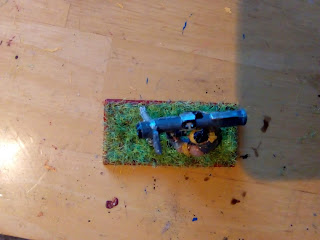 Here is one final shot, of another missile launcher. This was the second one of my old metal missile teams that I based and you can see that the base is a lot better on this one and you can not see the painted base nearly as much. Personally I don't think that having some inconsistencies within the bases is a bad thing, as the matt is not consistent and nor is nature.

Hopefully, I will be able to get the Hjaltland LI up here at some point, completed and displayed in all there glory. Although, I suppose I should figure out what I'm going to do with the fliers bases at some point.