Once more unto the breach.

So I finally managed to get a proper game in. It's take some time but we got there. I've played a few games over then last few weeks against my son's Tau but these have not been what I would consider proper matches, more fun matches to give my son some time on the table top and get him use to his rules, such as aura abilities, warlord traits and stratagems. This game however was against another club member, one who hasn't been playing for that long but is still quite knowledgeable about the game, having played a few games now.

I knew I was going to be up against it from the off, when he announced he was going to bring his custodes army, instead of his marines. I didn't blink however and threw myself at the game. His final list consisted of 14 models, a captain on bike plus 3 other bikes, a vexilus with the -1 to hit and 3 man units of guard with axes, wardens with spears and allarus with spears. Not a huge army but a very tough one, although no shields, so that's a bonus.

The game itself went pretty much as you'd imagine, however I did t get any pictures, as I was dealing with my son playing a game with my opponents son and another friend plus trying to remember rules and help my opponent out with his plans and options, not that he really needed any help!

In the end the game was a loss, With my actual score being 58 as I also claimed hold more last turn, as he moved off his objectives in his last turn (he went first) to try and do damage to me, enabling me to steal some extra points but the game was a forgone conclusion by that point anyway. 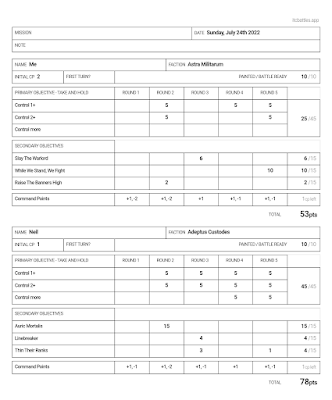 So what did I learn from the game? At a thousand points it's really hard to pick decent secondaries when your running tanks against custodes. He managed to nail his faction specific secondary and killed my warlord for max points, as my warlord wiffed all his shots turn 1! He was also unlucky not to score more for line breaker, a movement error turn 2 lost him some points and I managed to take out a unit turn 3 so stopping him getting any more points. There was also not enough units on the board to get a good tally for thin their ranks. On my side slay the warlord, although a good pick, doesn't get that many point, only 6, where as the custodies one, the one my opponent picked is basically the same thing but can get you over twice the points. I was hopeful that WWS,WF would get me points but one of the units was also my warlord, so I should have guessed that I would loose some points there and I was lucky with the other one, as I had two tanks that were identical but just happened to place the one that counted on the far side of the board to his bikes. Banners was a complete mistake as I really didn't have enough units to claim objectives and raise banners successful once the units got engaged. I should have either taken more troops or another secondary but there really wasn't any other I though could work. Maybe using some of the new Nephilim secondaries would have helped but we were playing the original rulebook eternal war missions.

Over all it was a good game and it was good to be playing again, even if the guard still aren't quite up where they should be yet, although auto wound on 6's is a great bonus. Maybe next time when I bring more infantry I'll be able to pull out a victory, although I doubt it!