While there hasn't been much posted on the blog lately and those posts that have been up have been pretty randomly posted, I'm glad to say that there has been some goings on in the background, namely the painting up of my marines. Having finished all of my guard armies finally (apart from the quickshade dip that is), it was time to.move on and first on the paint table were the Brazen Hawks chapter.

Now these guys were recently resurrected from the dead when I switched all my marines to Primaris marines. Under the new lore these are Imperial Fists successors but they may well also be played as Deathwatch. 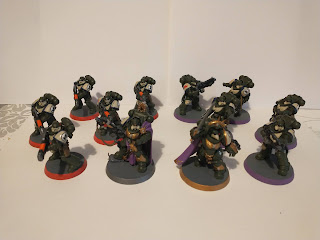 The full force
The full force is quite small, as with most of the marine chapters and comes out at just over 500 points. Annoyingly there is no way to drop it under the 500 point mark without dropping one of the characters. Talking of characters, some more eagle eyes amongst you might have noticed an issue with the list. 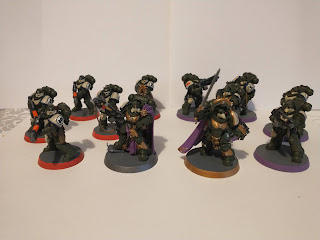 The force is comprised of a Captain, a Lieutenant, 5 Heavy Intercessors and 5 Hellblasters. Now, I would have liked the list to be completely filled with the heavy armoured version or mk10 "Gravis" armour but I didnt have a full force for this, so I figured that having the majority heavy armour and some standard armour was fine. 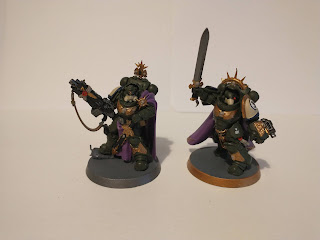 The commanders, Lieutenant and Captain.
Now, more obviously, here is the elephant in the room, with all the versions of marine Lieutenants that GW have released over the years, I don't actually know if there is a Gravis armoured on, there certainly doesn't seem to be one listed in the codex. So despite these two both technically being Captain models, one is being played as a Lieutenant with Bolt rifle and the Captain with have his Boltstorm Gauntlet and sword. While both models are quite blingy I think the Captain is pretty obvious with his extra gold trim and sword. 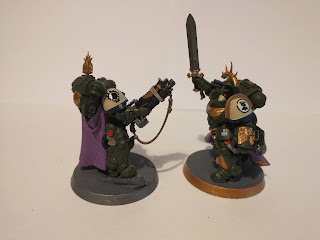 Some of the extra details. 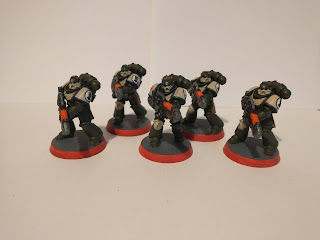 The Hellblasters
The Hellblasters are the only non-heavy armoured unit here and that's a shame but I still like these models. They are the main support elements and heavy hitters in this list. While only 5 strong, once backed up by the Captain and Lieutenant, they should be a formidable unit. While technically armed with the standard plasma gun, the Incinerator, I think that the whole force will be armed with the assault versions of each weapon, meaning that the force can keep moving up the table and move surprisingly fast as well. 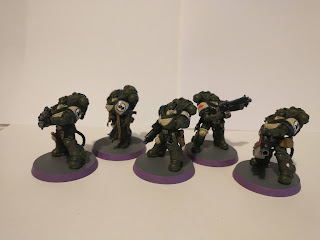 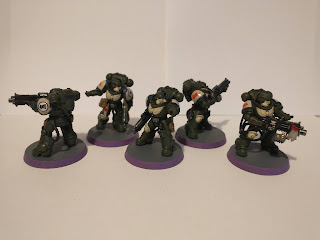 Now, there is a little mistake that I have to admit to. I don't know 8f anyone has noticed but both the Hellblasters and Heavy Intercessors are both wearing tactical or battle line symbol. This was a mistake I made when putting on the transfers but I'm getting around this issue by stating that rather than the squad roll, it designates the company roll and as such this is a tactical or battle line company. 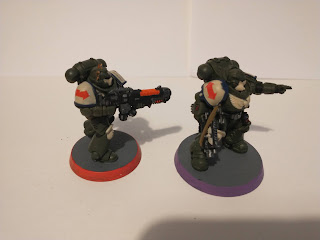 Matching symbols.
Talking of transfers, I hate transfers. Ok, that's a little bit of an over statement, I hate them on anything but flat, level surfaces. This is the first time I have used transfers on a 40k army, i may have used some on individual models in the past but these have all been vehicles and even then I think there's only one or two transfers on one or two vehicles, so not masses. Getting the transfers to sit nicely on the shoulder pads is a nightmare. With some minor knife work and a few cuts I managed to get them to sit on the pads but there not perfect by a long way. 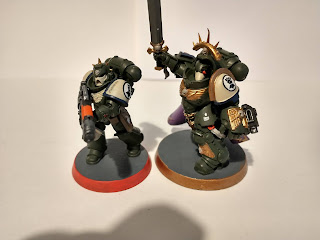 Some transfer details
Now, I have noticed a that there is quite a difference between new transfers and old transfers. When I say old, what I mean, is the ones that have been sat in my box for several years and then some more. Some of the sheets must be 10 years old, maybe even more and while not yellowed, they are not the same. Not only do they take quite a while longer to soak, they also do not transfer from the paper to the model as well. They don't stick very well either, taking a long time to dry and harden. The new sheets soak quickly, transfer smoothly and stay in place nicely. However, I still hate transfers! There are several products that you can get, microsol and microset are two that spring to mind, but I don't use the stuff enough to justify buying such luxuries. So far I'm over halfway through the transfers for my marines and I will be doing some vehicles next, but they will be fairly flat surfaces, so shouldn't be much trouble. Hopefully as I do more I will get better at them. I'll let you know if that holds true in the next post!