Here we have the Emperor's Disciples, an even smaller band than the last lot! These fine examples of space marines are scions of Guilliman and if they are ever fielded they will form the core command and warlord for the army, which will makes sense in a bit, if it doesn't already. 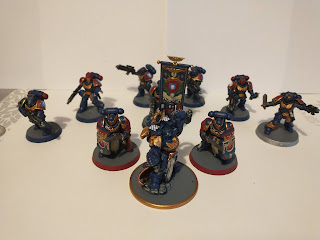 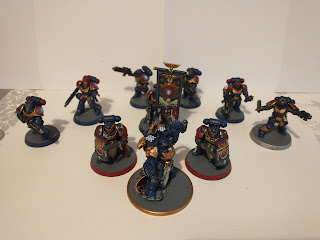 The Emperor's Disciples are not very codex compliant and while it was thought that they were sons of Dorn and the Imperial Fists, the coming of the Primaris Marines and detailed genetic testing showed that they were actually sons of Guilliman. However this did not cause much change to the chapters structure, with them.maintaining their fleet based ways and more independent company structure. Here we have the chapter master and his personal guard of hand picked veterans. 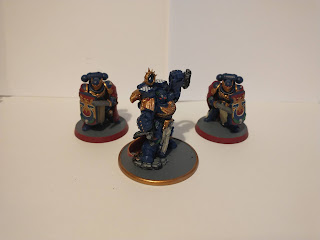 The chapter master and guard
Ok, if you haven't notice yet, then this figure is actually Marneus Calgar, chapter master of the Ultramarines, however for my purposes this is the chapter master Marcellus, Master of the Emperor's Disciples. There is a backstory to both him and the men he commands, namely that he was one Company Master of the 15th Campaign Company (lost \ destroyed companies are not replaced but new ones raised under a new number) and established himself as one of the most capable commanders of the chapter before crossing the Rubicon to become a Primaris marine. Unfortunately the then current chapter master did not survive the procedure, due to a number of reasons from old age through to damage to many of his current implants and systems. This elevated Marcellus to Chapter Master, by way of company master votes. 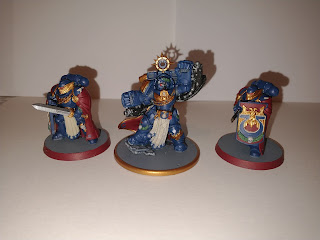 Marcellus and his chosen honour guard. 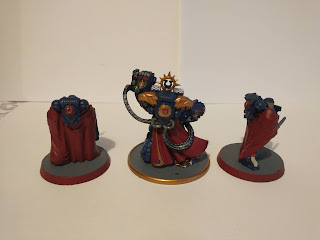 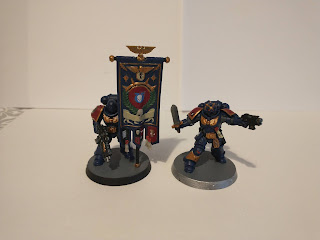 Ancient and Lieutenant
The company standard and it's attending ancient, a piece I'm quite proud of. I took some time with the details on the banner and while I've no doubt that it could be better, I think I did a good job on it. The Lieutenant is just a standard Lt with nothing special on him or about him. 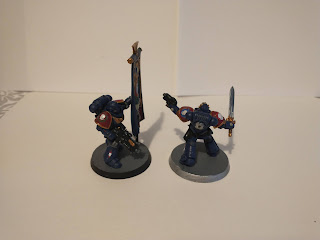 More details of the transfers 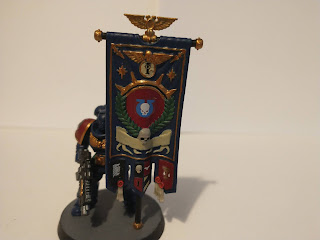 Standard details, i need to do something on the scroll but haven't found the right thing yet.
I have done this up as the first company standard rather than the chapters standard for a couple reasons. The main one being that I didn't think that this was a very ornate and flashy standard that would befit a chapter standard, plus these are not being deployed as a chapter but as a chapter command force and such wouldn't be bringing the chapter standard. Lastly, I didn't have the bits I wanted to really make this a chapter banner, namely the transfer for the middle. While there is one there, it's really to small. If this was going to be a chapter banner, I would want the chapter symbol to take up most of the standard, which would involve freehanding the both parts, something I am not keen on! I do need to fill up the banner with something, what thought I don't know but I'll keep an eye open for something. 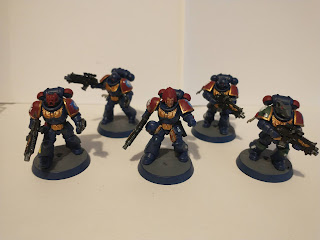 Veteran intercessor honour guard
Lastly we have the "veteran" intercessors. These will.be run as either standard intercessors in smaller games or veteran intercessors in larger games, where I will be able to.use troops from some of the other marine detachments. There are a few special intercessors in this unit and there is a reason for this, they are the units that my son painted up when he first painted some models. (You can see them HERE) 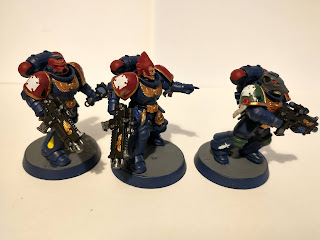 The company elite showing theor personal and campaign honours
While they are not exact copies, they a have taken a lot of inspiration from those models and with any thing I do like this there is a backstory to each model. I won't go into the details here but the short version is that one was honoured for exceptional individual bravery by s space wolf successor chapter and now wears the helmet of the wolf lord who he saved from certain death. The other wears the symbols of a blood angels successor chapter for his solitary stoic defence of their apothecary as he collected the geneseed of the chapters fallen warriors to stop it falling to heretic's from the death guard legion. Lastly the Sgt is honoured by the primogeniture themselves, the Ultramarines. Honoured for leadership and bravery during the plague wars, he wears his honours with less flash than his brother's but with just as much, if not more reverence. 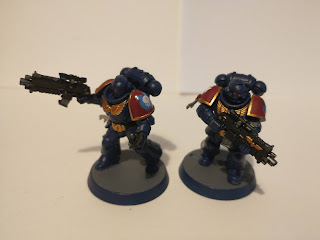 The last two members
The last two members of the squad are just regular marines who have shown themselves to be exceptional marines through countless battles and deeds and have been chosen to accompany the chapter master as part of his body guard, they have yet to earn themselves honours such as their squad mates have but time will see if they manage to.
Next up are the Stone Dragons, Space Wolves successors.