This post has been a bit of a nightmare to write, not because of the content but because I've written it 3 times! Don't know what happened to the first one, it just disappeared! Second time.i.managed to publish it half written and didn't even notice, which ment that when I wrote the last part it disappeared again! So I had to rewrite the last part of the article again and now finally, nearly a month after the article came out it's finished! Enjoy.

So we have the lasted war zone book, Octarius and in this first part we have a number of new rules, including a new guard supplement, Codex supplement; Cadia.

Now, I don't yet know the full rules for the supplement, even if by the time I actually finish writing this the book has been released but we know that there will be new stratagems, relics and warlord traits, all presumably based on Cadian heroics during the fall of Cadia. We did get a sneak preview of some of the rules, thanks to WarCom, these included two stratagems, a relic and a warlord trait, plus we get to see that they haven't changed the Cadian doctrine at all.

All this will not effect me very much, mostly because I have zero interest in buying the book. Partly as 90 percent of it will be useless to me and partly because I refuse to be drawn in to buying countless books in order to play games bit that's a rant for further down the page, first of all I will cover what I know of the supplement. The fact that it is concentrated on Cadian is not a surprise but given that Cadia has been destroyed, it would have been a great time to introduce a new regiment as the main guard regiment, it could still be Cadian centered, maybe a bunch of Cadians settling on a backwards planet and bringing the Cadian ways to it and building a "new" Cadia. Anyway, they haven't, which is a bit of a shame.

What do we know of the new rules? Well,enough to know that not much will be changing. We will have a look at the relic and warlord trait first, slightly out of order from the article and then look at the stratagems. The relic is alright but not amazing and probably won't get taken much as it's a power sword, a close combat weapon, which guard commanders to not excel at! The aura ability it gives is handy to have but overall not that useful. If your taking moral tests with guard, then your just lucky they survived at all! 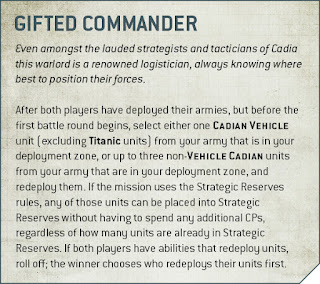 The real disappointment with this relic is that they killed of Bastonne in the process. I always liked Bastonnes character and was disappointed when he was removed from the codex. Having "killed" off Creed, Bastonne could have been a good Cadian character to use. The Warlord trait is quite a good one, allowing you to redeploy a vehicle or 3 non-vehicle units after deployment. This can be really useful for counter deployments and faints, causing your opponent to commit before pulling back and rendering his plan redundant. This is a tactic I could see me using but I still think there are better Warlord traits out there. 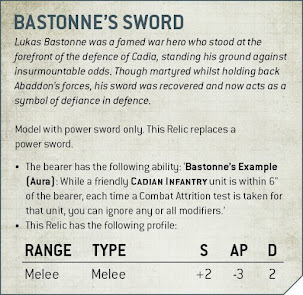 The first of the two stratagems we have been give is Cadia Stands and it gives us a mini transhuman physiology, working on 1's (which always fail anyway) and 2's to wound. This may not sound like much and it isn't massive as it will only take effect on S6 plus weapons, which generally speaking will be hitting your armour rather than troops, but more importantly a bonus to your save against D1 weapons, which are fairly common. It means that you'll still be saving on 4's or 5's against most of these weapons, which is a nice little bonus but again, not spectacular. The main issue with this stratagem is that it only effects a single unit, which for the most part will be a 10 man squad and will therefore have very little effect keeping these guys alive. Even when placed on a conscript blob it will not have a significant impact. I can't see this stratagem getting much use at all. 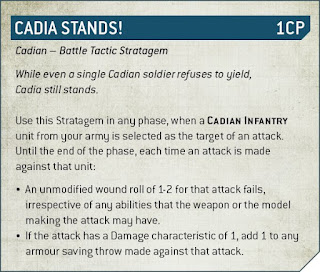 A stratagem I can see being used a lot is Whiteshields. This stratagem is used on conscript squads and can effect any number of squads you have in a detachment. It come in three part, the first just gives the squads the "Whiteshields" keyword and does little else, the second boosts leadership up to 6, which sounds nice but in reality will do little to the squad. Most of the time having a leadership of 6 will not effect any moral tests you have to take and you will.still be relying on other forms of leadership buffs, either through commissars or psychic powers. The last part of the stratagem is the most important part and removes the Raw Recruits "ability". This is a rule I have never like and was part of GW's knee jerk reaction to conscripts in tournaments. Now we have the option to get around this silly rule, even if it costs CP. The change means that orders will now automatically take effect and you won't have to roll for them, which is a lot better. The only downside to this all is that the Warlord has to be Cadian, which can limit your options for other things but in general I do not see this being a major issue. If your going to be running a lot of conscripts, then this really is the best way to run them. 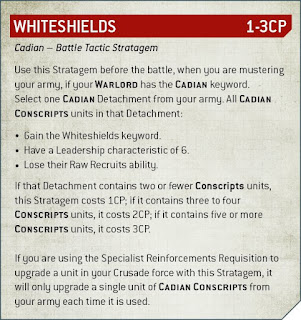 Overall I think the new supplement will be a nice addition to the guard toolbox but not a must have. I certainly won't be buying it anytime soon.