Sorry for the lack of posts recently but life has been full of ups and downs. With writing the codex wishlist and several periods of isolation over the last couple of months plus the family holiday to visit all the family, I really haven't had much time.to.sit down and write. This doesn't mean that there has been nothing going on in the background however. 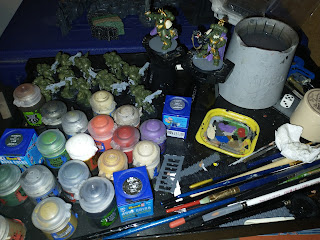 I have been working on quite a few bits and pieces. Firstly I have done some basic prep work on Sly Margo. I got this model several months ago for my birthday and I have taken it off the sprue and cleaned it up, making several sub assemblies ready for painting. I will be painting this model in sub assemblies, something I have not bothered doing before. I am determined to make this the best model I've ever made so far, however, this means it's going to take some time to do. I'm sure my son would like me to get it done sooner but I'm definitely not going to rush it.

I have also been working on some terrain. With the new kill team box release, I have decided it's time to get the pariah nexus terrain painted. A nice basic black with silver dry brush and blue highlights, to match the Necron paint scheme. Nothing fancy and it fits the other industrial terrain I have painted up. I know some people pair terrain very fancy but I like mine pretty plain and simple, it's just terrain and isn't supposed to out shine the models and seeing as my models aren't painted to a very high standard, I've got to keep it as plain as possible!

I addition to this is have been painting up my marines. While I have only finished painting 2 models, I have primed and started base coating all the models with their respective base colours. As you can see above I have been working on the Brazen Hawks chapter. 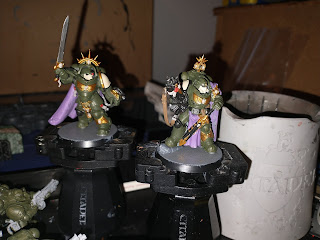 The Captain and Lieutenant.
There have been a few changes to the base scheme while painting, such as the addition of the coloured knee pad. This is however getting a minor tweak for the main marines, being changed to the same bone colour as the shoulder pads, as the majority of squad number I have are black. 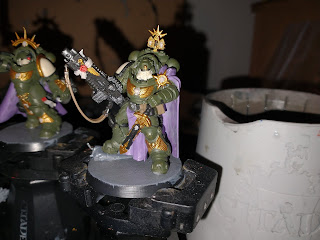 The Lieutenant
Now, this might seem.strange, given the amount of lieutenant models GW have given us but I think we need a new one, specifically a lieutenant in gravis armour. We have ones in every other armour but not gravis. Technically this is a captain model with master crafter bolt rifle but I have sub him in for a lieutenant, as he fits the bill nicely, even if I will have to.use him as a regular Primaris lieutenant. 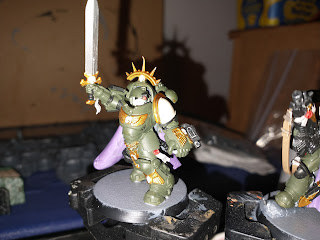 This is my captain model. Since this picture was taken I've actually added some transfers and I've remembered why I don't like transfers. Trying to get a transfer to stick properly to the shoulder pad is just stupidly hard. Whoever though this was a good idea is mad. I have also struggled with the knee pads as well. And to think, I'm planning on using these things on a whole bunch of other marines! I'm going to push on with the transfers but I think it's going to.annoy me greatly.

In addition to all this I picked up some more terrain, a couple of little barrel things and a broken rhino piece. I'll get these painted up shortly, not sure quite when though.

I'll do a proper update shortly but it'll have to wait until I get some small person free time, so he doesn't try and eat, throw, run off with any of my models.