So, with the release of kill team 2021, I have been looking at my teams. At present I have a number of teams, guard, scions, admech, sisters, chaos, tyranids and various marines,Grey Knights, Deathwatch, BA, SW, DA and Scouts. Plus there’s enough models in the house to build a Necron team. But, and it’s a big but, many of these teams will now be illegal to field in games of kill team. I’ll not go into depth on them too much, rather I will run through the basics of each new build and the maximum number of models I can field. 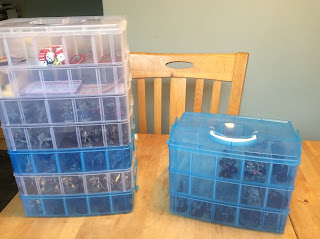 New teams in the left case, non-usable models in the right

As such we’ll  start with the most important ones, the guard and scions rosters. 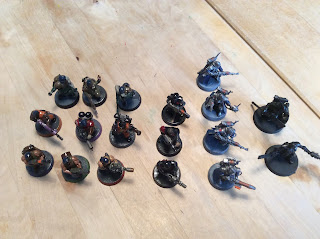 The guard are currently formed of 31 models, 30 guardsmen and one ogryn. The ogryn is out, as it’s no longer valid but what of the others? There are 2 sergeants, both of which will be kept due to their different loads. There are also two vox casters, now I’ve never needed two but had them anyway, now I’ll ditch one as part of the reshuffle. The "medic" however, is safe for the moment, even though there is no actual medic role. Next up are the special weapons troopers, of which I have 2 of each type, plasma gun, grenade launcher, melta, flamer and sniper. Under the new rules I can only ever field 1 of each, regardless of number of fire teams, so one of each type will be moved on. That gives me a total of 9 retained and 6 removed. Lastly we have all the general guardsmen, all 15 of them. Now, with the new fire teams, I can only ever field a maximum of 13 standard guardsmen and if I include the medic mentioned earlier, 3 of these have to go. Now, moving these models on is actually easier than it sounds, as it will be 5 special weapons, a vox caster and at least 3 guardsmen, which can, with a little bit of work and an additional Sgt, form a Veteran infantry squad in big 40k. That will leave me with 21 models in my guard roster.

The Scions however are in a slightly different boat. As it stands there are two sergeants including my "Inquisitor". Both will be kept in the new roster. There is only one flamer, Melta gunner and vox caster in the old roster, so they will all stay to the new one. There are however, two plasma gunners, two grenade launchers and two hotshot volley gunners, one of each will have to go. That will mean 8 remain and 3 will be lost. Of the rest, there is the "medic" again, who will be retained plus 8 scions. Now in the new format, I could have a maximum of 9 scions, so actually, all of the Scions plus the "medic" will be retained, meaning only 3 models will need to find a new home amongst the 40k inquisitional units as acolytes.

Next up we have the AdMech and again, there isn't much to loose here due to the difference in the rules. In terms of leaders, I have 3 alpha models available and all will be kept in the new roster. As for the rangers, I can field all the other 9 models, as there are two arc rifles and two transuranic arquebus', plus 5 standard rangers. This means one of each special weapon per fire team plus 3 rangers or 2 and an alpha. The vanguard however have a bit of a problem. With 2 alpha models and two special weapons, I have only 6 normal vanguard and I need 7 to be able to field two vanguard fire teams. This means that I can only ever field one fire team and so do not need 1 plasma Caliver and 1 vanguard model. So I may look at moving these across to 40k some how or maybe I'll just repaint the plasma Caliver from a vanguard to a ranger.

My sisters kill team is in a bit of a mess. Built for the last edition it is full of special weapons, one of each and also one of each of the heavy weapons options. These plus the sister superior and the icon bearer means that 7 of the 10 models are not standard sisters. So as it stands, I can build one fire team with a superior, icon, gunner and heavy gunner plus single warrior. The second fire team can have a gunner and only 2 sisters, 2 short of what I need to form a team. I can't sub in a different fire team as I don't own enough repentia or any arco-flagellants. I will have to see if I can find two more sisters from somewhere but for now the team will be shelved, unpainted and unfinished. 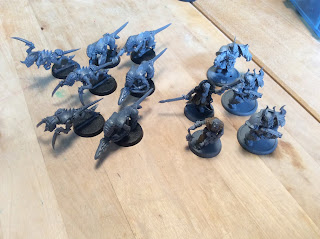 One of the few non-imperial forces, my chaos or traitor space marine kill team is also not in a great place. While the chaos cultist fire team is fine, with plenty of cultists, a cultist champion and options for gunners, the chaos marine fire team has more problems. A number of models are now illegal, being armed with lightning claws. I also have more bolter armed marines than I need. Overall about half the marines from the team will be dropped, to form a final team of 3 marines and cultists.

Tyranids are another faction with some issues. Currently there is just one Tyranid warrior in the force and numerous small bugs. You now need 3 Tyranid warriors to make a full fire team. I may well be able to find another two warriors to fill out the force but I honestly don't know if I will bother, as I'm not really that interested in having a Tyranid kill team and only had one to play against my son, which I can still do with the current models. 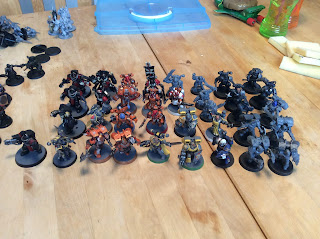 The collection of marines, in a rough order, DA, BA, SW, Scouts and Deathwatch.

The Grey Knights, are also in a strange place as technically all the models are still relevant. With the set-up I have I can still use all the models to form a kill team, as there are no restrictions on models or weapons apart from gunners but I only have one of each weapon. So at the moment, all the models will remain.

Another marine team is the Deathwatch. Now straight off 5 models now illegal, seeing as they are equipped with jump packs. As for the rest, most of the rest are still legal. The few issues that arise are from the fights and gunners. The issue with fighters is that I have two heavy thunder hammers, 1 more than is allowed in a kill team. The other issue is with the gunners, as I have several models armed with combi weapons and power weapons, which are now not legal.

Finally, we have the Scout kill team. Now originally this was a composite team of marines and scouts, so straight up 2 models are out, although both could be used in the main marine kill team, they are both Sgt models and there's already loads of them. There are also several scout sergeant models, which will be dropped I only need one. As for the rest, well I should have more than enough models to fill a team, with a mix of snipers, bolters and shotguns with a chunk of pistol and knives.