The last of my Eagle Knights Elites is finished, mostly anyway. The Primaris Librarian has had his wings built and painted and I have to say, I've pretty impressed with the results. However, the wings are just not quite what I was hoping for. I had hoped for them to be a little more ethereal in colour, as they are supposed to be of psychic origin, as in the psychic power Wings of Sanguinius, but they currently look more bone like. While I do like the wings and I if I decide to leave them as they are then I will be perfectly happy, I have purchased some Aethermatic Blue contrast paint to put over the wings, although I am very nervous about ruining the whole thing. I will try it out on a spare bit before doing it for real just to check it a) works and b) looks how I want it too.

Anyway, here are some photos of it currently. The pack is just blue tac'd on at the moment and I think I will have to magnetise it for storage reasons. 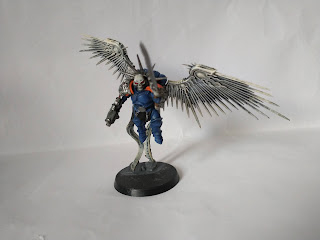 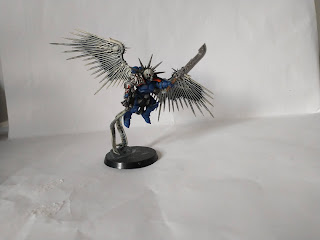 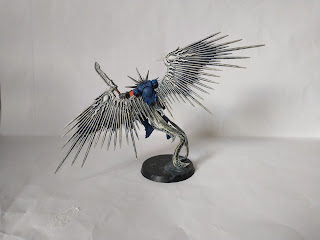 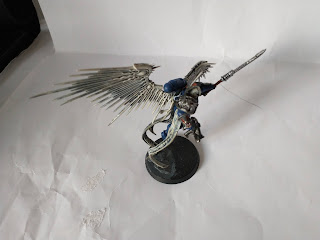 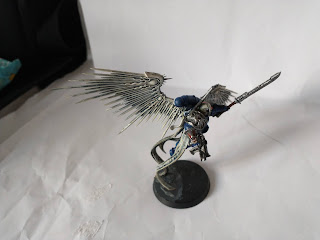 As you can see the wings are very white with dark shading. I was working with what I had available but I really should have gone for a brighter shade than Drakenhof Nightshade. There are some details that I really like of the model, such as the orange shoulder pad, which really stands out against the blue of the armour and also the silver of the right arm and shoulder. One of the other things that I'm tempted to do is to add some shading to the sword and try and make it feel a bit more like a force sword than just a normal sword, how I do this I have no idea, however I may use the Aethermatic Blue contrast paint on it.

I really do like this model as it is but I'm hoping that a few finishing touches can really take it to the next level. I'll let you know 8f I ever pluck up the courage to do it!