With the release of the latest GW mission pack and rules update book, Arks of Omen: Abaddon, we have been given a new detachment, the imaginatively names Arks of Omen Detachment. Now, the detachments used in 40k have been something of an annoyance to me for quite a while, ever since they changed over the way command points were linked to the detachments at the beginning of 9th. Before this there was an incentive to try and maximise you army size, for example with my guard armies it payed to push some sentinels in for fast attack options to get a brigade detachment and the extra CP it brought, even though I didn't want them. Or with marines taking those extra tactical squads to boost you to a battalion detachment. Yes there was a certain level of min-maxing in some armies but overall I liked the system, possibly because I could bring 24 CP to the table, against the majority of my opponents 10 or so. I even remember one 500 point tournament where I was bringing 14 CP to all my opponents 3 CP!

Anyway, with the changes there was very little point in taking anything other that battalion unless you wanted more fast attack or heavy support. The other three detachments were also pretty useless, as they cost CP with no way of getting anything back for your warlord. I was not a fan of this change at the time and I'm still not a fan, even if I've got use to it. 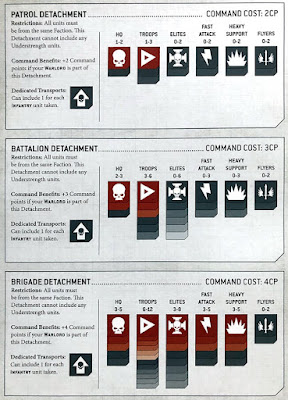 With Arks of Omen however, we have received a completely new detachment, which sort of combines all the options in to one, doesn't cost any CP and still gives you plenty of options to choose from. It also enables some more fluffy lists as well, such as Eldar jet bikes and Dark Angels Ravenwing and Deathwing lists. 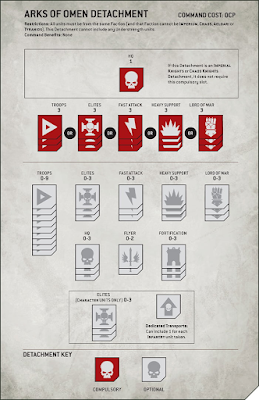 The new detachment offers lots of choice as well. Looking at all the optional slots, you can take up to 9 troops, 3 elites plus 3 more elite character slots and 3 from each of HQ, Fast attack, heavy support, lord of war and fortifications, plus 2 flyers. That is a lot of options, especially when you add in the compulsory choices. It gives you more options than any of the old detachment types, apart from the brigade detachment but then it also has far less compulsory choices which more than makes up for it. This detachment is also significantly better than any of the other older detachments, such as outrider, vanguard and spearhead, as it doesn't cost CP and has less restrictions of unit selections. Overall I think that this is a good detachment and I think I can put all my armies across to this detachment without to much bother, although I don't know if I will actually ever play an Arks of Omen game.

The real question is whether this is going to be the formula for 10th edition or just a one off for the end of 9th edition campaign books. I sort of hope that it's going to be the setup for 10th, as it simplifies the whole detachment system and does away with the whole CP cost nonsense but only time will tell.