This is the third of the battles that I fought in the last few weeks. This was between the Nids and Hjaltland LI again, although this time I was facing a different player and a very different Nids list. I was expecting this to be a hard fought battle but it didn't work out that way in the end, but I'll go in to that later.

The armies were 1027 points of Nids, consisting of several groups of Termagaunts and Hormagaunts, a Genestealer brood and a Lictor and I think 2 groups of Tyrinid warriors, but not 100% certain.

The Hjaltland LI, consisted of 1033 points, (yes I could have dropped a flamer or grenade launcher and hit 1027, but I didn't think about this until after) including, a command squad, 2 platoons of 3 squads apiece, my wyverns, and a couple of psykers, priests and commissars.

We played the Mealstrom game 4, I cant remember which one it is, but its the one where you can steal each others cards. I like this game as it can be helpful when you pull out your cards and think, "bullocks, can do any of them". Obviously this doesn't help when you opponent had completed all his cards already!

On a side note, we didn't do warlords, as my opposition was using a borrowed army without a codex, using battlescribe.

For my cards I drew 12/24/52  (fix bayonets, obj 4, blood and guts). I knew that all of these cards were out of reach for my first turn, so I prettymuch ignored them. With most of the nids hidden I stayed where I was, only moving up on the right to engage the unit of gaunts there. The main player for this and many other turns though was the wyverns. They managed to destroy a unit of gaunts outright for first blood.
So at the end of my turturnscored a point for first blood and Discarded 52 (blood and guts )

My opponent drew  cards - 16/51/64 (obj 6, overwhelming firepower, assassinate). Again, not a great set of cards, especially for a combat orientated army. However, he managed to steal one of my objectives for a point.
So after turn one my opponent scored - 24 (stole obj 4) and discarded 64 (assassinate )

It occurs to me now that I might have been playing things slightly wrong, with discarding cards. Do you do it at the end of your turn or at the beginning of the next just before you draw new cards. Think its supposed to be the latter and not the former as I've been playing. 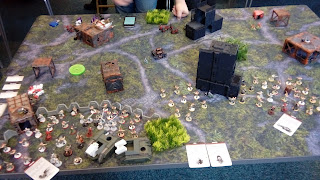 Just before the wyverns opened up, already the unit on the right is down to just 2 models and a center unit is decimated but its the Grey unit hiding behind the building that's about to bare the brunt of the stormshard mortars. 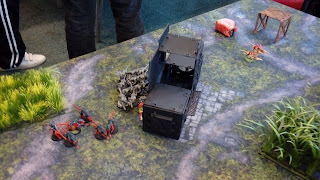 On turn 2 I drew some new cards, giving me - 12/13/34 (fix bayonets, strength in unity, obj 4). Again not great, but there was some points to be had. My turn was pretty simple again, hold on the left and push up on the right. This resulted in destroying the remnants of two gaunt squads, the one on the right with 2 models in, the last of the center units and a small squad to stealers leaving only one squad of gaunts hiding behind a building in the top left of the board. I managed to steal a card off my opposition and score an AM objective for 2 points - 16/13 (stole 16 - obj 6, strength in unity) and I discarded 12 (fix bayonets )

My opponent drew new card for turn 2 as well, ending up with cards - 12/22/51 (obj 2, obj 2, overwhelming firepower). If he could grab objective 2 in the center of the board he could get double points and seeing as he was already camped on objective 4, had the option to steal that as well. As it was he managed to get half his units in from reserve. One of the units came in dead on target the other scattered a little, unfortunately it was the unit going for objective 2 that scattered, lucky only by 4 inches, so it could still claim it when all the models were rather tactfully placed! These new units managed to wipe out 8 guardsmen in one squad, but it was starting to look like too little too late, even at this stage! At the end of the turn though he scored  - 12/22/34 (obj 2, obj 2, stole 34 - obj 4) for 3 points. 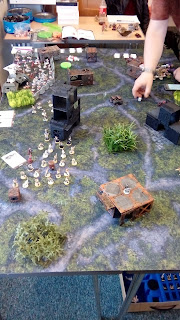 The horde moves up 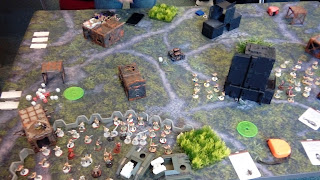 A lack of targets, good job the wyvern can rain death anywhere it likes! 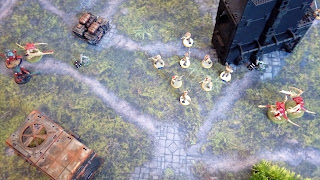 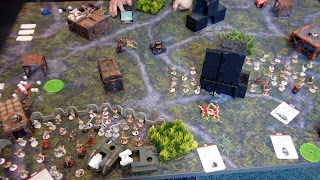 Just before the nids open up, the squad in the open in the middle are just about to take a whole lot of pain!


Turn 3 and my new cards - 15/23/25 (overwhelming number, obj 3, obj 5). This time I was confident that I could get all these cards done. The blob squad on the right flank did alittle bit of a conga line to get in range of the enemy and stay on an objective. Easy when you've got a lot of guardsmen to spare. Most of the nid reserves were removed this turn, leaving very little on the board. At 5he end ofmy turn I scored - 15/23/25 (overwhelming number, obj 3, obj 5)

mY opponents turn started with the arrival of the last of his reserves and the unavailing of his new cards - 42/51/53 (behind enemy lines, overwhelming firepower, no prisoners), all of which were achievable thanks the the deep striking units and the meager remains of one squad. The squad in question was dispatched with ease by the newly arrived units, but not a lot else happened. with only 4 units for a total of 12 models, half of which were spore mines, there was little else he could achieve. Anyway he scored 42/51/53 (behind enemy lines, overwhelming firepower, no prisoners) 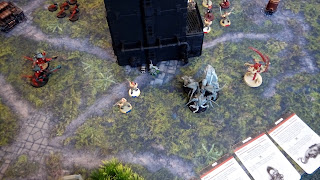 They survived turn 2, but there's only so much 2 guardsmen can do! 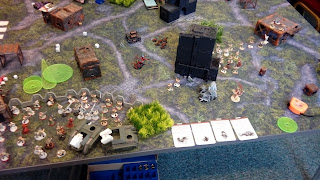 The conga line for the objective on the right.

Turn 4 and things were starting to look perilous for the nids. my cards this turn were - 16/44/56 (storm of fire, ascendency, harness the warp) and all were achievable this turn without much effort. Most of the effort went in to securing points by running units to ensure I claimed enough objectives and all the psykic dice went in to one roll to ensure success. As a result only just 2 of the units were removed from the enemy, all those with shooting abilities as it happened. As a result I scored - 16/44(2)/56 (storm of fire, ascendency for 2, harness the warp) 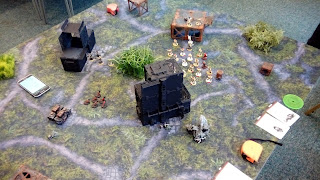 At The end of the top of turn 4 and the nids are suffering.

My opponents cards - 31/35/52  (obj 1, obj 5, blood and guts), did him few faviours this turn. If I remember correctly I had both of the objectives, but even if I hadn't I think the closest was still over 15 inches away. So he did what he could and went for the only card that he had a chance of getting, blood and guts. As a result he charged one ofmy squads, loosing one creature to the wall of death from 2 flamers, and then failing to do enough damage to the squad. The fact that there was a priest in the mix helped a lot, and I managed to get a wound back as well. So at the end he scored no points this round. 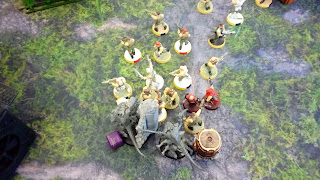 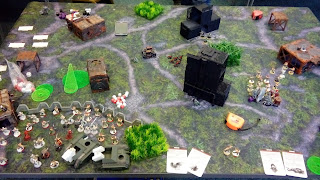 At this point we were running out of time and when I turned over my new cards I could achieve all of them, I cant remember what the cards were as I did not record them, and even with discarding a card and drawing a new one, it was going to be impossible for my opposition to score the required points to win or even draw, so we called it there. As it stood we both had line breaker, and points wise it was standing at 11 to 7 in my faviour. Another turn and the gap would have spread further, possibly in to a tabling.

Whilst this game wasa resounding victory for the imperium, I was surprised at how squishy the bugs were. I have always faced big stuff when playing nids and I realise why now, the basic troops and stuff are very very squishy. With poor saves and love T values there easy to remove, even for lowly guardsmen, where as the big stuff is almost impossible. Ill still take the win though!