There ate still a few more battle reports to write up but I thought I'd have a little break and look at a few other bits,namely terrain and Deathwatch, and possibly some other bits and pieces. Anyway, in case you missed the title, this post is about the various terrain options I've been looking at.

Firstly the battle mats. Now there are several companies out there that do mats, some ofthemore known ones are gamematz.eu and urbanmatz, as well as deepcut studios, terrain mats and battleboards and the there are some of the less well known (well less well known by me anyway) such as tiny war games and cigar box battle mats, plus a friend down my club has just received his kraken battle mats,which are still shipping their Kickstarter stuff before general release. With so many different mats out there its hard to decide which to buy! However I recently came across Javis mats. Javis seem to have started as a model railway scenery producer but have expanded a little.

Javis don't do a standard 6x4 mat, but do 4x2 instead, and this got me thinking. They do urban, desert and field, all in the 4x2 sixe, so with 3 mats I can make a 6x4 mat, but one that I can change around for every game and terrain. The idea is like this, say 2 desert and a urban plus a few buildings and trees, equals town on edge of desert, or two urban with a field in between, equals a large open park area between the buildings. with say 2 of each, I could create a number of different situations, so every game would be different. The down side? Well, the mats are not nearly as robust looking or as nice to look at, as they are not printed like many of the others but are cloth. I don't know how this will impact of wear and tear factors, but I think that they should hold up fairly well to the amount of use that they will be getting. I don't know anyone who has them, so I cant go and have a look, and I don't really trust the online stuff, as you only every seem to get the two extremes, those that love things and cant praise them highly enough or those that hate them and want to burn every single one.

But a mat doesn't make a battlefield. So what of terrain. Well, after looking at several options and also getting my hands on a few different types, namely some plastic Mantic terrain, some very nice scratch build stuff and some MDF building, I'm going with the MDF stuff. There are several good packages on eBay. It can be hard to choose which building to go for as there are some really nice looking ones, and they range from old west to ultra modern and sci-fi. But I want something to fit in with the fluff of my armies, mainly the IG ones, so I've been looking at single story type building, build in a kinda middle eastern type style. I eventually came up with this lot (picture just in case the link doesn't work): 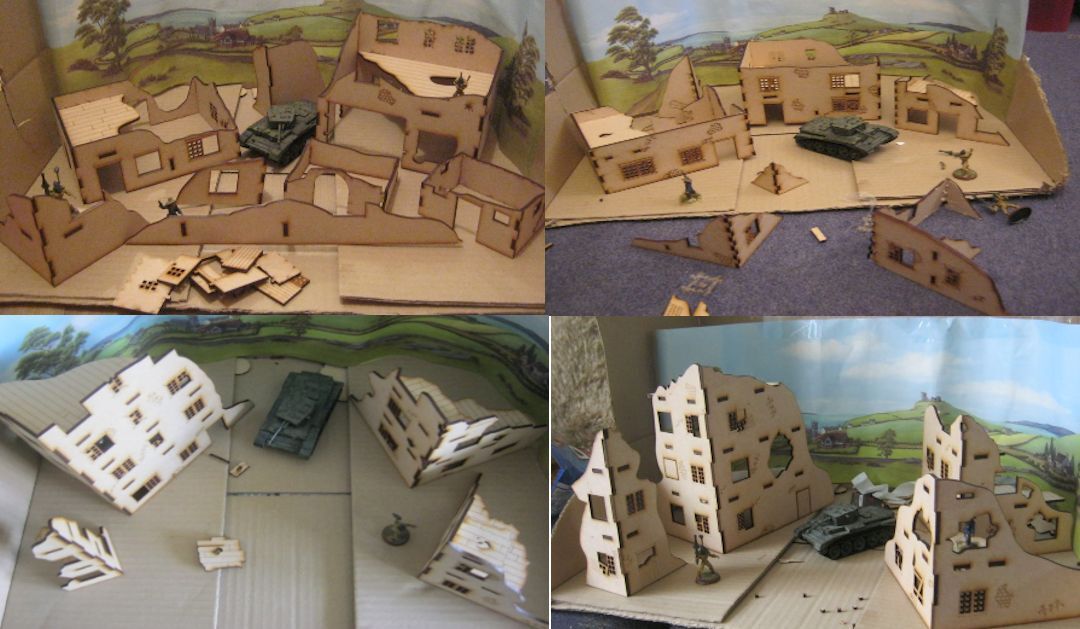 Ok, so not quite what I was looking for, but it covers every angle. Single story buildings plus some ruins, for making the little villages fitting the fluff of my IG worlds, some big buildings, mostly ruins for some off world action. They will also fit in with my plans for the mats, painting up the single story building to mostly fit the desert and grass areas and the bigger ruins for the urban areas, obviously I could chop and change a bit, but on the who I think that its going to be good. In addition, the same seller is selling off cuts/miss cuts that can be used to base other items, namely the trees/plants that will accompany the buildings. Again, these will be themed to the IG worlds and will there for be mostly made of fist tank plastic grass. Based up in small clumps, they will represent scrub and bushes and scattered around the board they can be used to represent the greener side to the planets, lots in the grass areas or just a few scattered around in the desert and urban areas.

All in all, I'm quite excited by this project and i'm hoping to get it underway soon. However, I may have to wait until funds are more available, which may well be after Christmas, when I've had all my present money (yes, no ones buys me present these days, I just get money and told to "buy something nice", so that would be little men stuff then.