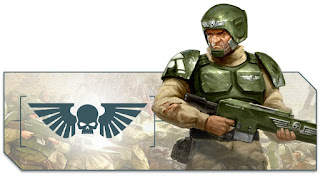 For the last post before we get in to the actual units I have combined the last two sections that are not covered anywhere else, the relics or heirlooms as the guard know them, and the psychic discipline, the Pyskana discipline. We will start with the relics and once again they are split in to general, regiment and Scion relics. There are actually not that many of the relics that I think need work, as a) there are not many relics and b) most are fairly balanced.

The only general relic I think needs looking at is Kurov's Aquila. This is because it is a CP regeneration relic and with the changes to the way CP can be regenerated it has lost a lot of usefulness. It use to be combined with the Grand Strategist warlord trait to CP farm, somethi g I have done very successful in the past, but now it's really a choice between one or the other and if you want to go this way, grand strategist is the better option as you roll a dice for each CP spent not per stratagem. I think this needs changing to either reduce certain CP spends, say regimental specific ones, or be reworded to make the CP regeneration more certain, say on a 2+.

Of the regimental specific heirlooms there is only two relics that I think needs changing, the first being Valhallans Pietrov's pistol. Now I don't think the pistol profile or the actual ability needs changing here, what I think needs changing is the wording to bring it up to date with 9th edition, as currently you only loose one model as a result of a failed morale test, you loose others as part of the combat attrition test. As written, you would loose a model for the failed morale and then more for the combat attrition test, when it's intent is that you should only ever loose one model in total for both parts. A quick up date to state that any nearby units who fail morale, loose a model and than auto pass combat attrition tests.

The other relic that needs some work is the Armageddon Skull Mask of Acheron. Again, this is a moral modifying relic, in this case causing a moral debuff and again it needs bringing inline with 9th. I think that having a negative to leadership is fine but it also needs to come with modification to combat attrition tests. Causing fails on 1's and 2's in addition to the negative to leadership is the way forward for relics and Stratagems, and that what needs to be applied here I think.

In addition to the Regimental relics, there are Scion relics, one generic one and 6 specific ones. Of these there is 9noy one relic that I think requires adjustment. The Kappic Eagles relic, Distraction Charges, comes in to effect during overwatch. Now, with overwatch being a Stratagem, your effectively having to pay twice for a relic. I do like this relic, it actually has a real use, helping your guys stay out of combat, however, I think that if you take this relic, you shouldn't have to pay for overwatch as well. You have to be within just a couple of inches of the model with the relic for it to take effect, so it's not going to mean that half your army can fire overwatch, but it will mean that it has a real value. Overwatch isn't some overly powerful ability, but it is useful and with it now being a Stratagem, this relic is pretty useless. One other way to limit it would be that you had to nominate just a single unit within a short range that could use the ability and overwatch for free. Still restricting overwatch but also making this relic useful.

Lastly we have the guards psychic powers, the psykana discipline. While it's not a very powerful discipline it does have a number of 7seful defensive powers. One of the few offensive powers is the one that I think needs work. Gaze of the Emperor is short range mortal wound dealing power and my issues with it come from the randomness of it. First you have to pass the test, then roll for range, the roll to see if you actually do anything. That's 3 lots of dice rolling, with no guarantee you'll actually achieve anything. The main issue for me is the random range. If they would make the range fixed, at least you could work out your chances of successfully doing wounds, but with out even knowing the range it's difficult to plan anything. Personally I would like to see the casting value rise, an 8 would still be fine, the range be fixed, say 8 or 9 inches, and the chance of doing mortal wounds increased, even a 3+ would be fine. All these things would really make it a good l, reliable power but not overly so.

So, this is the last post from the rules before we get in to actual units, starting with HQ units and you probably have spotted a general theme to my complaints. Anything relating to moral needs to be brought inline with the new ways of 9th edition, as does anything relating to overwatch. Randomness needs to be removed or at the very least toned down and finally guard are not good at combat, so stop giving us stuff to use in combat because chances are we'll die before we get to use them. How many of these things will be fixed, especially in a way I want them is debatable but hopefully they will change a few of the more obvious ones.