Lead by Inquisitor Tullus (using the Tempestor rules) this team is built around the idea of an Inquisitor and his retinue of retainers. There are 20 members in total, making a full roster which won't change much, as I don't plan on adding on any elites to the force.

Despite the force being lead by Inquisitor Tullus, the one model that I haven't actually painted yet is Inquisitor Tullas. I had been waiting until I could spend a significant period of time on the model and really do it justice but I got distracted and painted a whole AdMech kill team instead (more on that later).

One of the main points of note on this roster is that Tullus has had a bit of a transformation. From this; 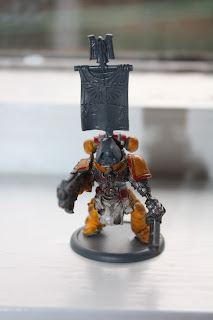 Marcas Tullus
To this; 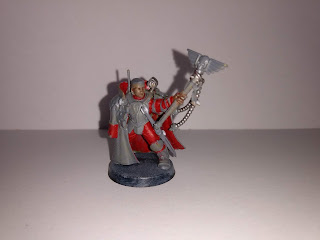 But who is Tullus? The main story can be found HERE but for a short version read on; Marcas Tullus, who is now Sophiana Tullus, is a radical Xanthan Inquisitor, who is willing to do what ever it takes to defend the imperium. Armed with plasma pistol, a relic power sword (rumoured to be of Eldar origin) and here baton of office, she is a formidable force. 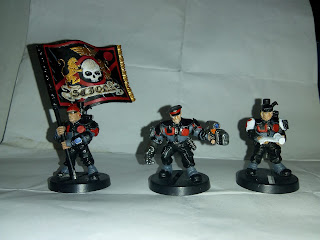 Next up is Sargeant Dharem (also using the Tempestor rules), Tullus' right hand man. A Pious man by nature, putting as much, if not more, faith in the Emperor for his survival, as he does in his fist and pistol. The fist itself is not just for show but takes the place of his own ruined hand, one ruined during a campaign against a chaos cultists long ago and would probably have meant the death of Dharem, if not for the timely arrival of Tullus and accompanying space Marines. The plasma pistol is also a reminder of that day, although the actual weapon used that fateful day has long since been destroyed, the current weapon was a gift from Tullus and is amongst the finest weapons money can buy.

Acolyte Egaryn fulfils two roles within the retinue, that of Vox Caster and also Standard Bearer. While he occasionally carries a traditional Vox Caster set, he is more often seen carrying a modified standard, with a vox caster system cleverly hidden withing the staff. Egaryn is a very gung-ho, often seen standing at the front, standard held high for all to see, pistol in hand.

Acolyte Gorskia is the retinue's apothacary (or medical officer). Gorskia is as Pious as any member of the retinue, although where others rely on there faith to protect them, Gorskia relies on her faith to heal and help her fellow acolytes. 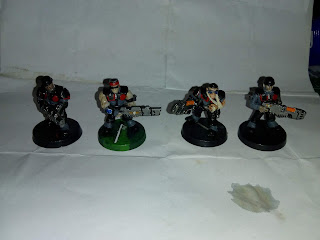 Trevinskia is a hard as nails, ex-ganger from the back of beyond. She was recruited by Tullus from the holding cells of the local Arbites and is as courageous and fearless as they come.  Trevinskia's weapon on choice in the gangs was the heavy stubber, mostly for it's ability to put lots of lumps of metal towards her target as quickly as possible, so when she was recruited in the the Inquisition it was natural for her to migrate towards the hotshot volley gun,  which she uses with the same deadly efficiency she had with the stubber.

Ralpe was a guardsman from a small agriworld and is one of the longest serving acolytes of Tullus' retinue. Ralpe however has a very different view on things to many of his counterparts, as where they are all willing to sacrifice themselves out of loyalty to Tullus, Ralpe is driven only by duty. Yes he is loyal to the Inquisitor but his duty to the Emperor is far more important to him.

Sonnam, the man with a thousand lives. While Sonnam is probably, if not the best shot out of everyone, he is also beyond doubt the most stupid. Barely a missing goes by where he does not end up in the medical suite with self inflicted injuries from overcharging his plasma gun, something he does alarmingly often for his squad mates.

Varencia also wields a plasma gun, although she is generally far more sensible when overcharging the volatile weapon, which is probably down to her more formal and arguably superior training while she was an enforcer on her home planet. While she may not be as good a shot as Sonnam she is far more courageous, willing to put herself in harm's way in order to get a better shot or to ensure that the target is eliminated. 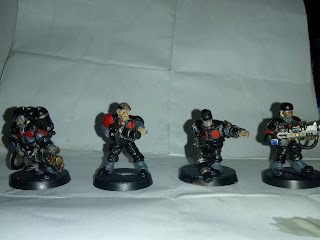 El'Shan is, as you would expect of a man who's favorite weapon is a flamer, as mad as they come. El'Shan was recruited from the more undesirable part of the Empire and is about as macho as they come and will always try to muscle his way to the front of any encounter, regardless of whether his flamer will be useful or not.

Graf is an old soldier, recruited at a fairly old age for an acolyte. This has not stopped him making quite a name for himself withing the team. A close friend of El'Shan and, despite there differences, the two can often be found fighting along side each other, although Graf does not like to get quite as close, preferring to stay a little further back and unleash a steady stream of grenades from his launcher.

Viers is distinctly different from Graf. A consummate professional, Viers prefers the application of precision over quantity. Viers is seen as cold and aloof by the other acolytes but he was not always this way. Many years ago you would have known him as the life and soul of any company but after the massacre of his fellow squad mates by traitors from within his own regiment, he has been consumed by the need for vengeance and has made a personal vow to destroy those responsible for the traitorous act.

Mohalli is probably the most loyal of all Tullus' retinue and will follow any and all orders given to the letter, never deviating. Armed with her favourite weapon, her trusted melta. Despite it's short range Mohalli favours the weapon for it's lethal killing power that little can escape when hit. 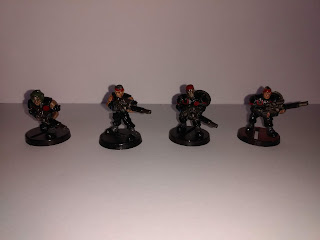 Kleiss is a man on the edge. After years of service and having witnessed unspeakable sights, Kleiss' mind is on the edge of the abyss. There are few things that he will bulk at and even fewer that he will not gladly stand he ground against, or even advance against. Kleiss has few dreams these days, except to die gloriously for the emperor.

Swiftrider was born and breed on a tribal world and was immersed in the ways of tribal warriors from birth. One key facet of this was to always answer a challenge and Swiftrider is always quick to accept, whether the challenge comes from a cultists or a bloodthirster! Swiftrider is never happier than when closing in for that final blow.

Khaleeth is also from a tribal world but one very different from swiftriders, for the status of an individual is secondary to the tribes. As such Khaleeth sees his duty  more as a protector of this tribe, than  and will go out of his way to ensure the survival of it's members, as a tribe is strongest when all members are still alive to actually fight.

Axel is a born warrior, born on the streets of an underhive somewhere in the imperium's outer reaches, he grew up fast, else he perish in some dark corner somewhere. Conscripted in to the guard at a young age, he had to learn to fight a whole new way but took many of the lessons of his youth with him. One of the many things he learnt through the this time was that cowardice get you killed a lot quicker and so Axel vowed to become the most courageous soldier he could be, which is what got him noticed but the Inquisitor. 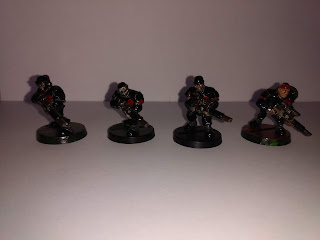 Creed considers himself an expert in all things warfare related and in many respects he isn't far wrong. Hailing from the world of Cadia, he, like all Cadian children, was taught the arts of warfare from a very young age and with his service in the Shock Troops and later the Kasrkin before his years with the Inquisitor have given Creed a welth of knowledge to draw upon.

Chernovia. There are some within the team, like Graf, who will tell tales of there adventures soldiering around the Galaxy and there are some, like Viers, who's past is less well know and then there is Chernovia. What the other acolytes know of her could be written on the back of your hand and there would still be room to spare. What is know is that she is young, female and high born, that and she never takes her mask off in public. She rarely speaks and even when she does it's with the aid of amplifiers in her mask. What else is know is that she is haunted by some nightmare or another, at night her screams can be heard throughout the ship.

Arvina is a haunted by all that she has seen, haunted by the helpless that she feels every time she witnesses another massacre by chaos cultists. She has sworn to do whatever it takes to avenge those who are so cruelly treated and that is why she follows the Inquisitor.

Hammer is a Catachan and that should tell you everything you need to know about him. More requisition than recruited when the Inquisitor needed a tracker to trace a cult leader through a jungle swamp. That was many years ago and Hammer has just continued acting as tracker and scout ever since.