This is the first of three games that I played a few weeks ago. The yearly local tournament is coming up shortly. This tournament is a 1250 point tournament and although there are few restrictions the key one is that there is only lord of war option allowed. this was due to last years tournament when a knight army (at 1500 points) wiped the table in all three games and took the trophy with little difficulty. While there was nothing wrong with the list, it wasn't very much fun for everyone else by the sound of it.

Anyway on to the game, we played a Maelstrom of war game at the above mentioned 1250 points of guard against Space Wolves. My opponent was running a fairly heavy list with three dreads, including one redemptor.

There was little was really bothered about in the list apart from the blood claws in the drop pod. 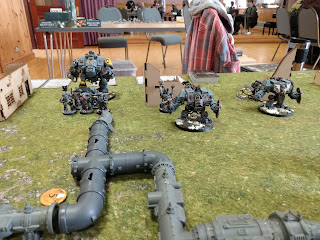 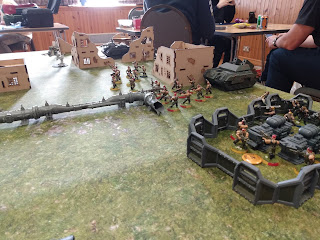 Turn 1 was as expected with the drop pod coming in and the blood claws charging the guard lines. 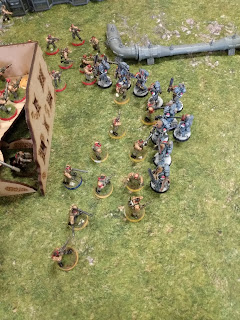 The wolves did as they were expected and tore into the lines taking out several squads of guard. 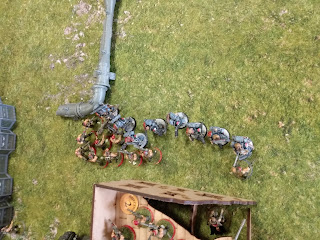 All of the rest of the wolves either stood still.and shot or advanced forwards.

In my first turn the primary goal was to clear my lines, which ianaged to do, although some mistakes were made, such as leaving the hellhound until last, meaning most of the targets were out of range! 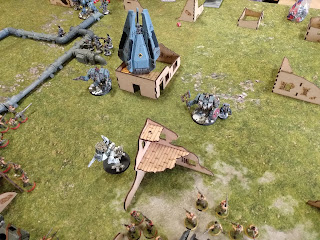 The fight back starts. 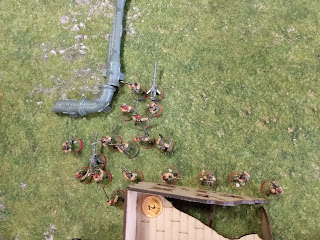 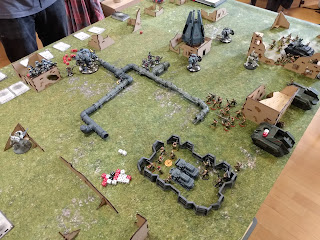 End of the turn 1

Turn 2 started much slower, with the dreads reaching my lines, while much of the rest stayed back. The plasma long fangs did some damage to one of the wyverns but the guard survived fairly intact. 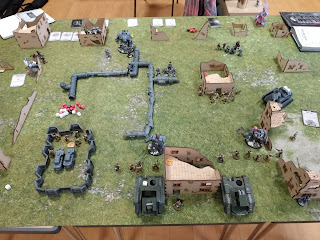 Dreads in the line 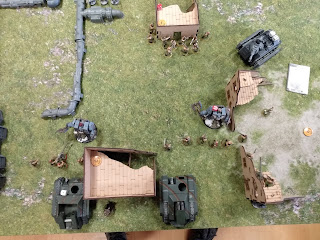 A better view of the danger.

The big thing to happen this turn was the charge of the dreads. Despite what it looks like in the pictures, the dreads went a different way and the right dread charged the hellhound and the left dread charged the units in front of the right hand dread. The left hand dread made it's charge and went chop chop through a number of guardsmen but failed to do enough damage to kill them and consolidate on to the wyvern. The other dread, well we've no idea if it would have made it's charge as the hellhound barbequed it before it had a chance, granted it was already wounded, down to a handful of wounds but still. 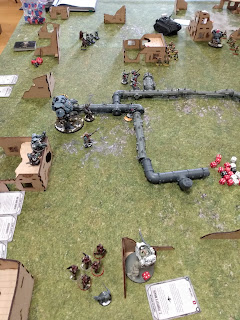 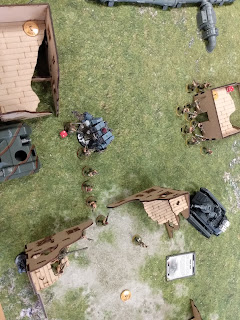 Slightly out of order but it's a pain to reorder pictures on mobile, the final result of the dreads charges.

During my turn, I dropped in my scions, only for one lot to get wiped out by the redemptor using a stratagem. The others did there job, taking down a number of long fangs and grey hunters between the two remaining squads. The rest of the army dealt the other dread, clearing the lines once more.

Turn 3 was unfortunately the last turn due to time constraints. I didn't as many pictures as we were busy trying to get the turn done. The wolves we're lacking in numbers by now but still managed to put a take down the majority of my reserves. 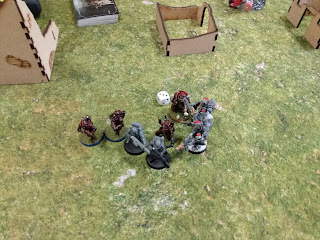 Two SW characters charge in, the result of which can be seen in the back of the picture below. 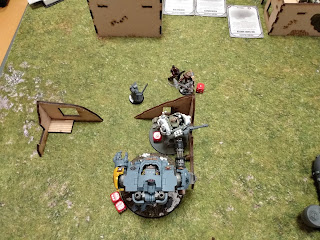 Somehow the sentinel survived a round of combat with a redemptor, it didn't survive two though.

At the end of turn three things weren't as I had expected. My opponent had managed to score 2 points from his cards ( 64 and 65 but not 46) and I had not managed to score any of mine (34, 35 and 41). Once we had taken line breaker in to account the scores were 8-4 in favour of the wolves, despite how few of there units remained on the table. At the end of turn 3, the wolves had the redemptor, an injured iron priest (who was also the warlord), one plasma cannon long fangs and a couple of grey hunters (I can't remember exactly how many but it was only 2 or 3) where as the guard had both wyverns, a hellhound, 3 incomplete squads of guard, several characters and a couple of scions. At this point we did some quick and rough mathhammer and we look at the cards we would have drawn. I cat remember what cards we drew but with what was on the table and looking at the cards it was looking like the guard would have been able to take victory should the game go on. The big issue was the redemptor as I was rapidly running out of things to damage it, however, there was little in my army that it could not damage in return.

So the final score went down as a 8 to 4 loss for the guard, which should have been an 8 to 5 if I'd actually though a little at the end and ran a model in to my opponents deployment zone. Oh well. So, although it was a loss for the guard, I really don't think I didn't anything wrong or would change anything to much, as if the game had gone 5 turns I think I would have been able to pull in to the lead as I had the bodies left to get to objectives and claim points.