So, I haven't posted for a while (again!) But I have a good excuse this time! 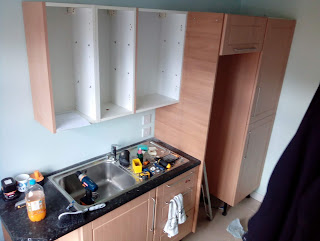 Over the last couple of weeks I have been rebuilding the utility room, including rebuilding walls, re-wiring and plumbing, ripping out the kitchen cupboards and relocating them to the utility room. I've been on a bit of a time schedule as the vinyl floor is being layed tomorrow and so pretty much everything needs to be sorted by then. As things stand, by the time you read this, I should have the majority sorted, hopefully it will just be the window to repaint (dam wooden windows).

Once the utility is finished, I then need to start on the pantry and redo that. Well I say redo bit in actual fact, I need to create one from the random bit of space between the kitchen and the conservatory at the back of the garage. No I've no idea why the previous owners decided to build the conservatory out the back of the garage and then fix the fact that it's out the back of the garage by building a random room to join the kitchen and conservatory but they did and now I have the job of turning this in to a more useful space, hence pantry. All this need to be done quickly, as the actual kitchen needs ripping out and preparing for the new kitchen that should arrive in about 2 weeks time. Oh, and it's not just a case of taking out the old kitchen and putting in the new one, because that would be far to simple. No, I need to completely rewire, although we may get an electrician in for that, as the new cooker will be electric induction and not bottled gas. Then there is the plumbing to sort as we're moving the sink and dishwasher, possibly taking down part of the wall, if it's not supporting the ceiling that is! The list goes on and on and as usual you the first thing to get chopped is hobby time.

That being said I did actually get a 1500 point game of 40k in last week (batrep incoming at some point) and managed to pop down the club last weekend to say hi to everyone. I've also got quite a few posts in the draft folder that are half written and I should have a bit of time in a couple of weeks, when the wife is south visiting family, to write a few posts, provided the kitchen fitting is going well that is!

Anyway, that's why there haven't been many posts and why there may not be many post for a little while. I though that with the wife being on maternity leave this year I would have loads of time to blog and hobby, instead I've less and less time!
Posted by Steve at 19:30:00