So, after my first game of 9th, which as a bit of a disaster, I've a few thoughts on the game and also 9th.
First up a quick run down on the menu forces and what they did in the game; 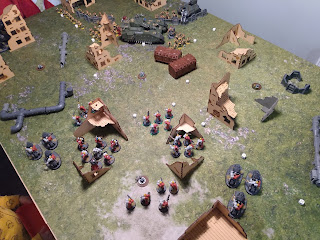 The Storm Lords arrayed for battle

Jump captain - did little during the game and while running with the clawed vets was not really required to remove any of the units they faced.

Jump chaplain - was most useful for dropping the charge distance for the fist equipped vets, was useful but never really had much of an influence due to being dropped out on the edge of the board.

assault Intercessor squads - didn't get to do much during the game as both were destroyed by the Hellhammer early in the game.

intercessor squads - one held the home objective all game and the other gradually moved up to take my objective late in the game. Both proved very very hard to remove.

Blade guard squad - these were a name in my side the whole game. These will be target priority one next time. I threw bits and pieces of firepower at these guys during the game but I should have thrown everything at them early on and removed them. The main cannon of the Hellhammer would have been good for removing these guys, had I fired it them. With 3 wounds and a 4++ save, every failed save would have been a dead marine. 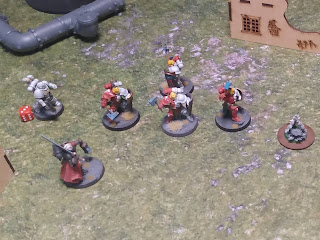 Invictor tactical warsuits - the suits had their lucky pants on for the game as the vendetta fired 12 lascannon shots for 5 damage, which came from the 1 shot that actually went through. These guys should have been dead, or at least one of them should have been.

Judicar - while not powerful himself, his ability really proved decisive. The ability to make a model fight last is really good and I should have targeted him earlier. I probably did have the chance to but didn't take it, which was a mistake.

Apothecary - not just an apothecary but a Chief Apothecary, which is massively overpowered! The ability to heal two models up to 3 wounds and bring a model back on full wounds for 0cp is huge and kept the blade guard punching at full power all game. He needs to die and die soon next time!

Vanguard vets - the claws did what they did and wiped out every unit they touched with ease, apart from the Ogryn Bodyguard, which proved a little harder, the fists were a less useful, originally dropping on the far side and then not really having any proper targets to attack.

attack bike squad - outflanked, missed, died to the Hellhammer, just as planned. Could have been a real pain but the Hellhammer did what it was supposed to and wiped them out with ease

outrider squads - these were a pain but I managed to deal with one fairly early but the other survived being hit with a Hellhammer, only taking out one and injuring another. I think I should have hit the blade guard rather than these guys turn 1. Still a unit that needs dealing with in a Scars list, due to there immense mobility.

So in summary, most of the units I thought were going to be the big threats were and then a few extras, namely the apothecary! I also ignored the blade guard, thinking that they wouldn't be able to do.much against the Hellhammer but with D2 power swords, this was a mistake!

I also guessed on three secondaries; Engage on all fronts, Thin their ranks and Assassinate. I was kind of right, as he did take engage on all fronts but took the mission specific secondary - direct assault and the marine specific one - oath of moments, which seems such a broad secondary that there is always going to generate points.

All in all these secondaries proved well chosen, with mobile troops easily able to pick up engage, and the second two complimenting each other nicely.  The oath of moments secondary is quite a good secondary and you can easily pick up 5 points over the course of the game by pretty much doing nothing. 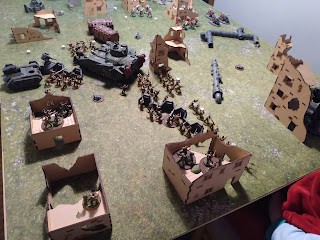 Forces of the Imperium

But enough about my enemy, how did I do? Badly that's how, I had many good ideas which turned out to be not such good ideas but I learnt a lot of lessons, so that was a positive. Firstly the way objectives work in the sweep and clear mission is very powerful, claiming an objective until it's taken by someone else and not having to leave units babysitting objectives is very useful and something I forgot about. I could have moved up a lot more that I did. Secondly, talking of moving up, I did the unthinkable and split my infantry up and sent them off by themselves. This got them destroyed and my tank unprotected. This was a mistake and it cost me both tank and troops. Thirdly I was far to eager to push forward, I should have sat back for the first couple of turns and then pushed forward turns 3 onwards. I relied on the tanks toughness and high wounds to keep it alive but even with this the wounds were chipped of one by one or rather two by two by the blade guard. There was even opportunities to retreat with it at times but I didn't, which was silly. 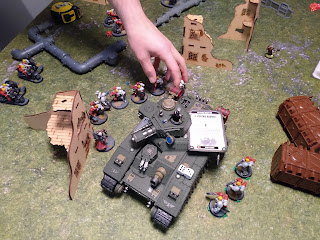 Secondaries wise, I think I did alright with them. Engage worked well and if I had thought a bit more at the time I could have easily managed this most turns. Parking the Hellhammer in one quarter, my main force in another and then pushed all the infantry up in to the third. The flyers would have occupied the forth when they turned up. I think the mental interrogation was also good, maybe I could use another psykers to make the most of it but I still think it was a good choice. The last secondary, while we stand, was also a good one for the game as my flyers took very little damage at all, due to the lack of long range high damage weapons the enemy had. The Hellhammer obviously died and as I mentioned above, I could and should have played better with it. In the end I think that I over played my hand and didn't really have a good handle on the abilities of my units. Needless to say I think I have a lot to learn about 9th but I also think I've made a good start.

The next game will be a few weeks away, after at Christmas sometime. I hope that this will go a little better and I will have a better grasp of tactics and abilities. I don't think that the secondaries will change much but I do think how I play will. My opponent will most likely be Marines again but with a different flavour, so we will have to see how that goes.